Recent projections for Medicare spending from the Centers for Medicare and Medicaid Services (CMS) and Congressional Budget Office (CBO) are virtually identical through 2040, and both agencies’ projections for spending have fallen dramatically in recent years. But beyond 2040, the projections diverge. CBO, for example, projects that health spending will reach 10.5 percent of GDP in 2080, a full 3.7 percentage points higher than in CMS’s baseline projections. 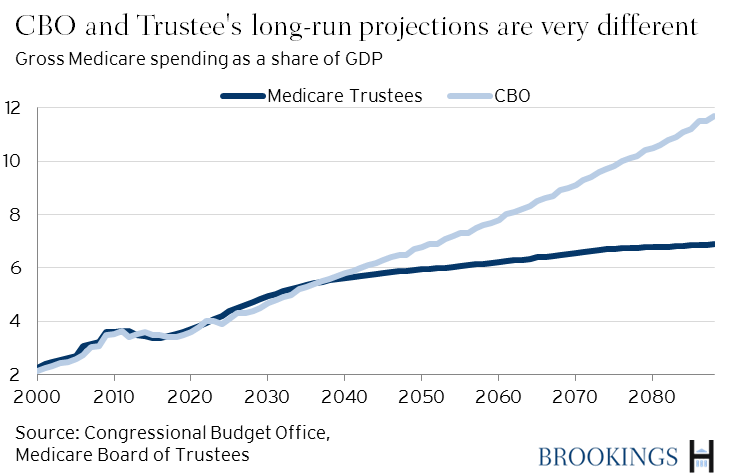 It’s not that CBO and CMS are doing bad projections—it’s that it is impossible to do a meaningful 75-year projection for health spending. CBO’s recent emphasis on the 25-year outlook, and its de-emphasis on the longer-run outlook, makes a lot of sense.

Research Assistant, The Hutchins Center on Fiscal and Monetary Policy

Will Medicare run out of money?

Health policy solutions for the Biden administration and the 117th U.S. Congress

TRACE-STL: Stemming a fourth COVID-19 wave at the local level

Ross A. Hammond and Matt Kasman
Monday, March 1, 2021
Get daily updates from Brookings