Health spending growth is one of the key drivers of the nation’s long-term fiscal outlook. It also is one of the most uncertain, a point emphasized in the Congressional Budget Office’s latest report on the long-term budget outlook.

Although the continuing slowdown in health care costs led CBO to mark down its estimate of underlying health cost growth a bit, other changes in methodology were offsetting. That left the 25-year projections of total federal health spending largely unchanged from last year.

Nonetheless, those projections are sharply lower than those CBO made just five years ago, despite the coverage expansions enacted in the Affordable Care Act (ACA). The most recent estimates show federal spending on the major health programs (Medicare, Medicaid, Children’s Health Insurance Program, and the subsidies for those eligible who buy insurance on the new exchanges ) rising from 4.9 percent of GDP in 2014 to 7.5 percent in 2035. That is about 2.2 percentage points lower in 2035 than CBO projected in 2009. The outlook for Medicare has improved even more, with projected Medicare expenditures in 2035 about 2.6 percentage points lower than projected in 2009. 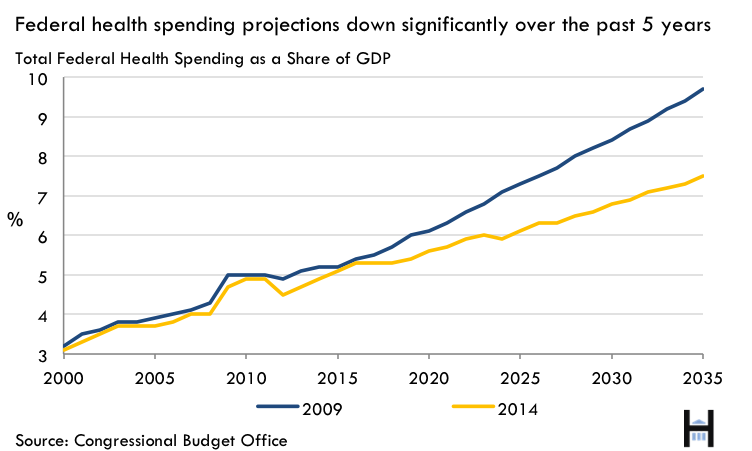 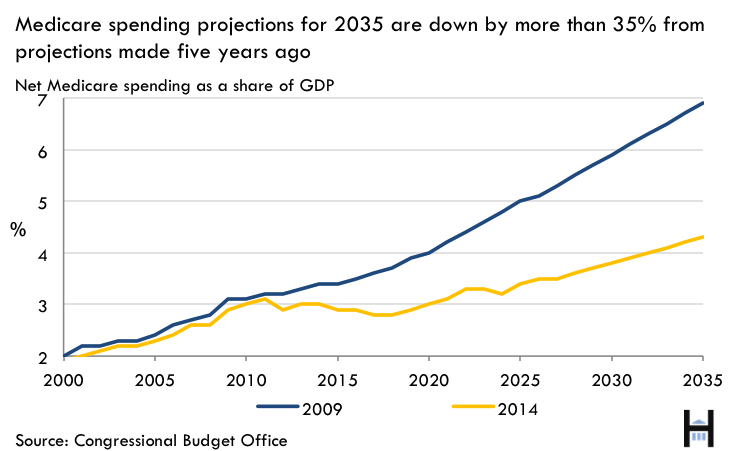 Today’s CBO report puts great emphasis on the uncertainty surrounding the health care projections. Budget wonks will notice a change in CBO methodology: the long-term health spending projections are now more mechanical, and CBO no longer offers different scenarios based on whether future Congresses will overrule the ACA’s cost-cutting measures. Clearly, CBO is trying to signal how little is actually known about future health cost growth.

Research Assistant, The Hutchins Center on Fiscal and Monetary Policy 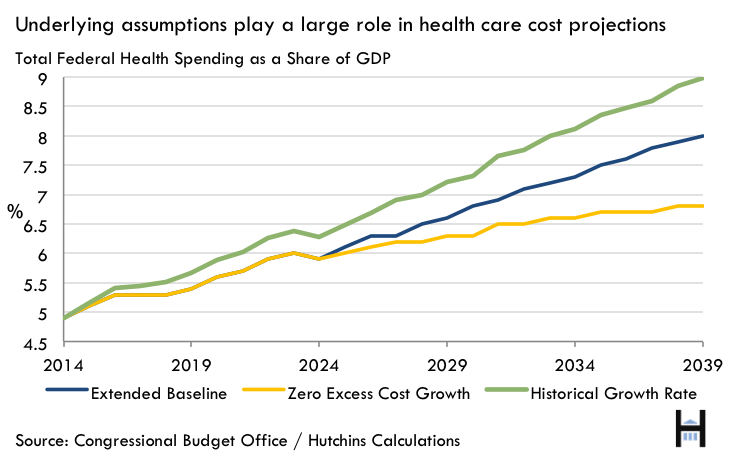 A key question for economists and policymakers is how to think about this uncertainty: how should recognizing how little we know about the future affect our policy choices today? Some analysts believe that we should take action now to insulate us against the risk of larger-than-expected budget imbalances in the future. Others—particularly those who are very hopeful about future health cost growth—prefer “watchful waiting.”