Normally human pregnancies last about 40 weeks, but one in eight babies are born preterm, or before 37 weeks in the womb. About two in 100 babies are born “very preterm,” before 32 weeks, which ranges from two to four months early. This rate has been essentially unchanged for nearly three decades, and prematurity represents the leading cause of infant mortality in the United States. Born with immature “gelatinous” skin, immature lungs requiring ventilation, fused eyelids, and other undeveloped organs, very premature newborns face significant risk of death or disability.

The Challenge of Improving Care


Neonatal care has advanced markedly over the past several decades. For example, nothing could be done to save even John F. Kennedy’s premature son Patrick after he was born prematurely at 34 weeks gestation, but today almost all late preterm infants survive. However, for very preterm infants, mortality and long-term morbidities remain real risks.

In response, several leading large neonatal intensive care units (NICUs) are joining forces through “quality collaboratives” to help facilitate the knowledge sharing that will achieve continuous quality improvement across the field. To improve outcomes, clinicians can seek out new knowledge or scientific discoveries, or enhance the knowledge base and implementation of best practices. Ultimately, the purpose of quality collaboratives is for NICUs to have an impact on fixing problems they can today, using a system-wide approach.

A recent “Policy Lessons from the Clinic” lecture, part of the Merkin Initiative on Payment Reform and Clinical Leadership at the Engelberg Center, examined one such program. In Massachusetts, the Neonatal Quality Improvement Collaborative, known as NeoQIC, was formed in 2006 with the goal of sharing data and practices to improve outcomes for high risk newborns. They began by focusing on preventable infections in premature infants. At the NeoQIC’s inception, there was huge variation in infection rates (Fig. 1). 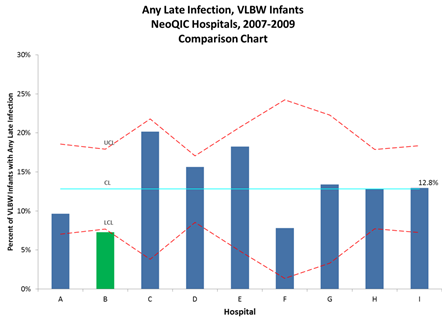 To clinicians, variation in outcomes suggests opportunity for systematic change. Clinicians are encouraged to understand what high-performing hospitals are doing, and what strategies others can use within their organizations. Over the next few years, representatives from NICUs across Massachusetts met regularly to share and review their data, and gradually implemented statewide changes in neonatal care. NeoQIC supported quality improvement efforts, collaborative projects, and education, and paired these efforts with comparative quality reports that incentivized hospitals and clinicians to improve, especially when being compared to their peers. Over time, this correlated with a nearly 67% reduction in neonatal infections. 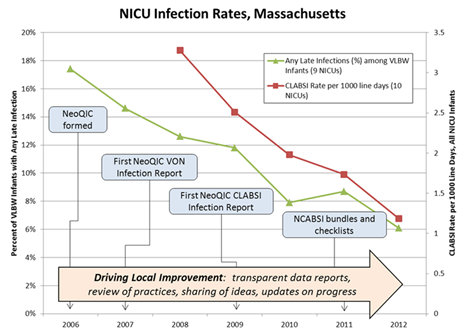 Moving ahead, NeoQIC will tackle standardizing care for newborns whose mothers are opiate addicts. Born addicted to narcotics, these newborns are at high risk of developmental delays and long hospitalizations.

The Challenge of Sustainability

One would think payers like Medicaid and private insurers would have clear financial mechanisms to support this kind of work. However, traditional fee-for-service reimbursement only pays for hospital-based procedures and care. As a result, NeoQIC’s work—and the work of similar large quality improvement collaboratives in a variety of specialties rely almost entirely on the goodwill of involved clinicians. For example, NeoQIC has largely functioned with a minimal annual budget and no paid staff. The clinician leads, Dr. Munish Gupta of Beth Israel Deaconess Hospital and Alan Picarillo of University of Massachusetts, as well as the hospital-based improvement teams do the work on their own time and draw no funding for reimbursement, salary, or clinical billing.

In addition, clinicians can have a difficult time monetizing their quality improvement efforts. Data ownership, patient attribution, and care given outside of the organization make providing accurate cost savings and return on investment difficult. Further, many payment models reward improvement rather than good performance, which puts providers and hospitals that already deliver high quality care (and have less room for improvement) at a disadvantage.

Improving care in the U.S. health care system is a classic economic public-good problem. Investments by one payer accrue benefits to other payers because of overlapping networks—but the rub is that no single payer may be willing to assume the costs to improve quality.

The Promise of Alternative Payment Models

In 2004, a Health Affairs study proposed five challenges that quality improvement efforts face from payers, which are summarized in Figure 3.


Figure 3: Considerations for payers to implement a quality improvement program 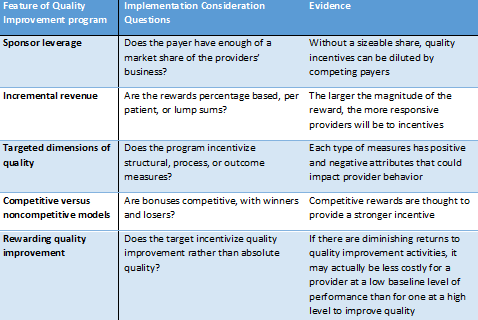 For NeoQIC, one option might be to quantify the costs savings that resulted from their efforts (e.g. reduction in infections), and work with public payers like Medicaid to consider pilot funding of collaborative. Compared to the cost savings of infections prevented and reductions in hospital length of stay, the costs of supporting and sustaining the development of a quality collaborative would likely be trivial. Such creative notions are themselves only in the early stages.

Despite the challenge of making the business case for why payers should be paying attention to quality improvement, there is hope that innovative providers and payers will be willing to take the steps forward.