As expected, the Fed continued its tapering process, lowering monthly asset purchases by a total of $10 billion at today’s FOMC meeting. They did take a somewhat more optimistic tone noting “that growth in economic activity has picked up recently, after having slowed sharply during the winter in part because of adverse weather conditions.” Given this potential change in view it is unfortunate that they failed to follow up on Fed Chair Janet Yellen’s recent attempt to inject uncertainty about the path of future interest rates. Not doing so risks increased financial market and economic volatility in the future.

The impact of the winter weather was evident in today’s advanced first quarter GDP report, in which the economy grew a weaker than expected 0.1% annualized rate (Figure 1). The details of the report are consistent with the Fed’s more optimistic tone as higher frequency data suggest weather-related weakness in construction activity and personal consumption of goods are likely to be reversed in the second quarter. Furthermore, the realignment of inventory levels, which took away 0.6 percentage points from growth is likely to abate going forward. Most analysts are looking for growth to rebound to 3%+ in the second quarter. 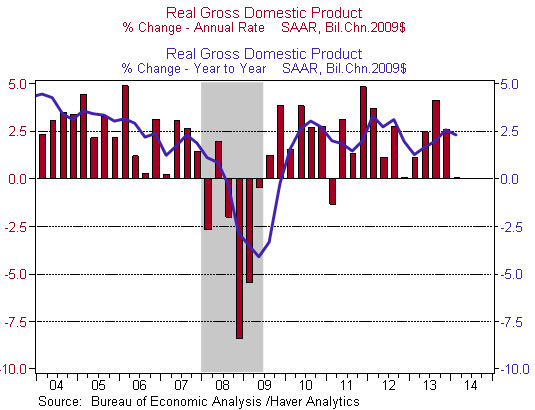 One area of concern remains the continued softness in corporate investment, which fell 5.5% in the winter quarter. It’s hard to argue that this is weather related, as capital spending on equipment has been relatively weak for a number of quarters, despite robust profits and huge sums of cash on corporate balance sheets (Figure 2). The good news is that capital goods orders, a leading indicator of future investment, looks like it has turned the corner in recent months (Figure 3). 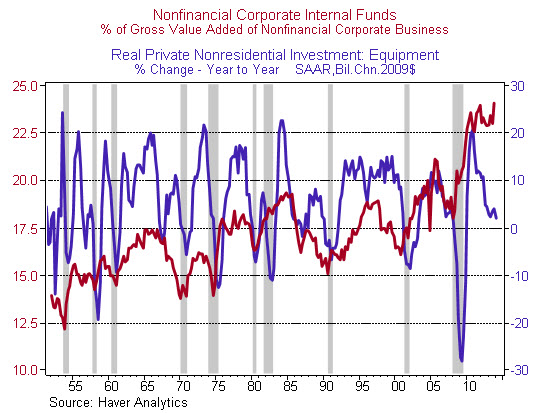 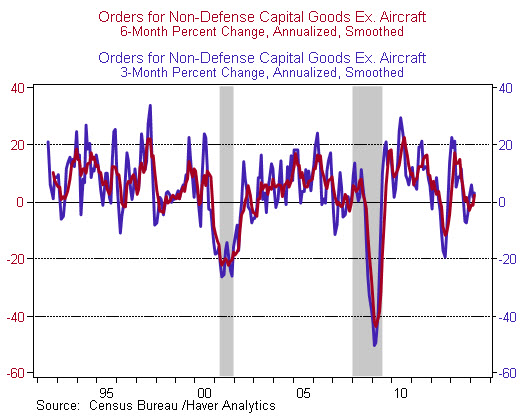 Though growth was weak in the first quarter, it is quite notable that nominal GDP, which is the key indicator for corporate profitability, asset valuations and some even argue Fed policy, continues to grow at a fairly steady 4% pace (Figure 4). Some analysts question whether the deceleration of growth from its previous 6% pace is a permanent change. In my opinion, it is too early to tell. History suggests that post-financial crises recoveries are much weaker than normal recoveries (Figure 5), thus it’s not surprising that some perceive that the U.S. economy has settled into a permanently slower pace of growth. In fact the current U.S. performance (green line in Figure 5) is better than one would expect given the magnitude of the crisis, owning partly, in my opinion, to the aggressiveness of the policy response. Now it seems that the headwinds from the financial crisis are diminishing and the economy is about to take off. 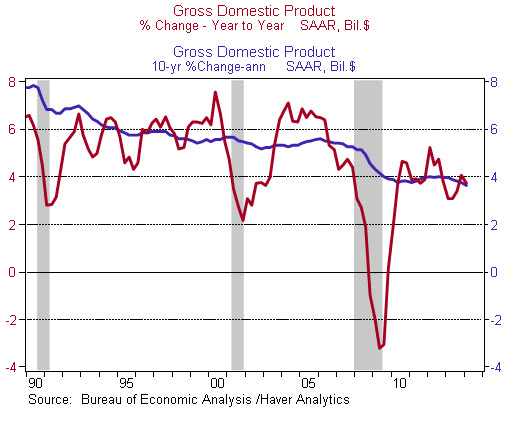 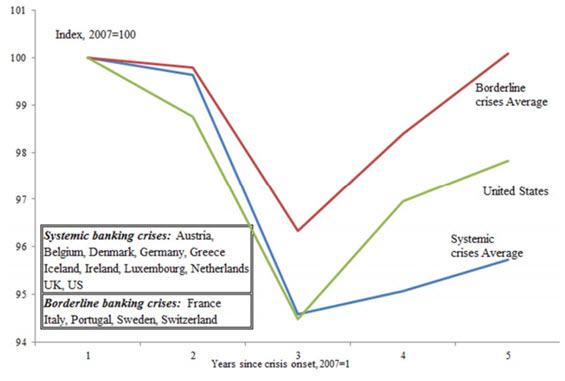 Source: Reinhart and Rogoff “This time is different, again? The US five years after the onset of subprime”

This brings us back to today’s FOMC meeting. In an effort to lower interest rates and encourage risk taking, the Fed has made a concerted effort to reduce uncertainty about the path of policy. While I strongly agree with transparency about its policy reaction function, I have been less sanguine about the Fed’s single-minded focus on its base case of a continued sluggish recovery, leaving significant slack in the economy for the foreseeable future. Until Fed Chair Yellen’s April 16th speech to the Economic Club of New York, I felt that the Fed was trying to create a sense of false certainty about the path of interest rates.[1] Maybe today’s increased optimism will force the Fed to focus on adding uncertainty to the path of policy.

Why is this effort so important? While a reduction in policy uncertainty can be the key to crisis containment and reversal, once the economy has healed it can create unnecessary risk taking and thereby foster future financial market and economic volatility. In other words, should bond market volatility and term premia be this low if the economy is about to take-off and if the risks to the forecast are no longer assymetric (Figures 6 and 7).[2] 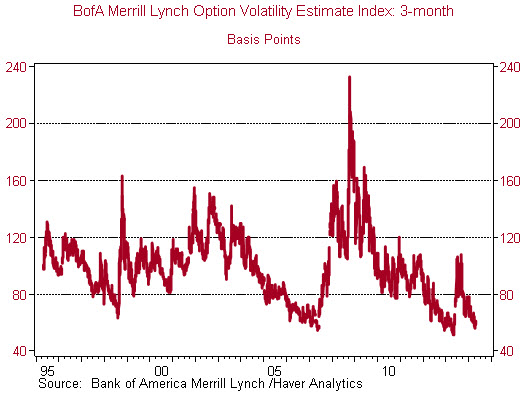 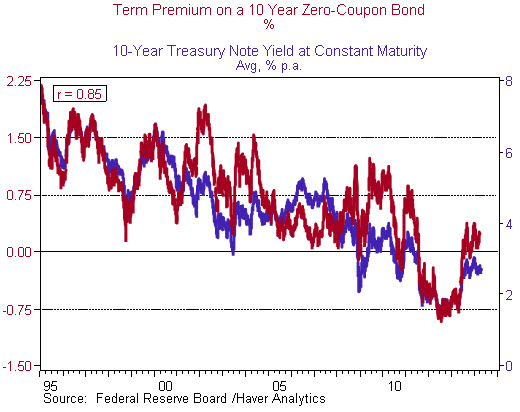 How do I propose injecting more policy uncertainty? A good start would be publishing fan charts with probability distributions of economic outcomes similar to what the Bank of England does. Then highlight those distributions during speeches and testimony. I believe that market participants now understand that the Fed has returned to data dependency. If the Fed starts telling people that they don’t know how the data will evolve, the market will get the picture. Perhaps we will have to wait until the next FOMC meeting which includes a forecast round and press conference to introduce such a radical change in policy.

[1] See http://www.federalreserve.gov/newsevents/speech/yellen20140416a.htm. It’s not surprising that we have not seen a significant increase in measures of market uncertainty following the speech. While the speech did focus on the concept of forecast uncertainty, it also stressed the downside risks to the economy, which in my opinion offset the focus on uncertainty.

[2] Term premia are the amount that investors need to be compensated for owning longer dated assets. For risk free assets such as U.S. Treasuries, investors don’t worry about getting their interest or principal back, but they do worry about the value of those interest or principal payments if interest rates or inflation rises in the future. Thus greater uncertainty about the future should lead to higher term premia. At present the term premium for a 10-year bond is slightly above zero.