Global stock markets reacted well to the release last week of China’s first quarter data. GDP growth of 7.4 percent was slightly ahead of consensus forecasts and relieved worries of a hard landing. Many analysts (including me) feel that the composition of growth is more important that the GDP number, and this week the National Bureau of Statistics released the contributions of consumption, investment and net exports to GDP growth (see chart). 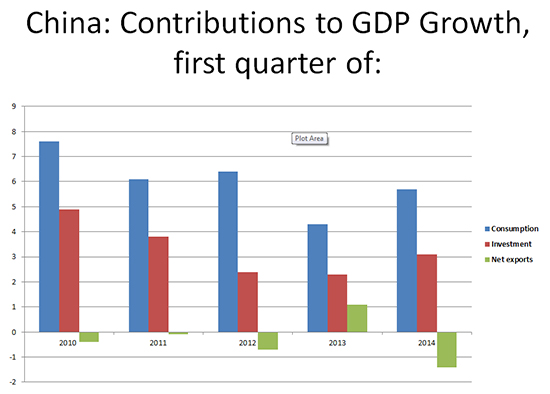 View a chart of new data on China’s economic growth

The bad news is that we have seen this pattern before. In each year from 2010-2013 the first quarter had very robust growth of consumption. The first quarter is the main holiday period when many big purchases are made. Investment is muted because of weather and holidays. In the years 2010-2013 consumption growth slowed after the first quarter and for the year contributed an average of 4.5 percentage points to growth; while investment accelerated and contributed 4.4 percentage points. Thus, there was almost no shift in the balance between consumption and investment over the period. This continuing high level of investment has led to excess capacity in sectors throughout the economy.

As the year proceeds consumption growth is likely to slow, as in previous years. The contribution of net exports is likely to turn from negative to close to zero as the U.S. and global economies recover. The overall growth rate then will depend on how much investment there is. The pattern of recent years is for the government to stimulate investment to grow robustly and to keep the GDP growth rate around 8 percent. China’s growth will be more sustainable if, alternatively, the government accepted the slowdown of the growth rate towards 7 percent and moved ahead vigorously on the reform agenda that would lead to higher household incomes and consumption and less, but more efficient, investment.

Focusing on the middle class

How can the US support democracy and development in Latin America?

[As the Fed and other major central banks begin raising rates, some emerging market central banks would be forced to follow suit. Otherwise, capital would flee and their currencies would plunge in value, further aggravating inflation.] You could have a crisis if investors all decide to run for the exits at the same time.

Douglas A. Rediker The Washington Post Tuesday, July 6, 2021
Get daily updates from Brookings