The Earned Income Tax Credit (EITC) is one of our nation’s most effective anti-poverty policies, bringing 10.1 million families out of poverty in 2012. The EITC is designed to reward work by increasing wages for low-income workers; workers with low incomes can receive up to an additional 45 cents for every dollar they earn. Recognizing the ability of the EITC to ease poverty and incent work, the President recently called for an expansion of the EITC for childless workers in his State of the Union address. 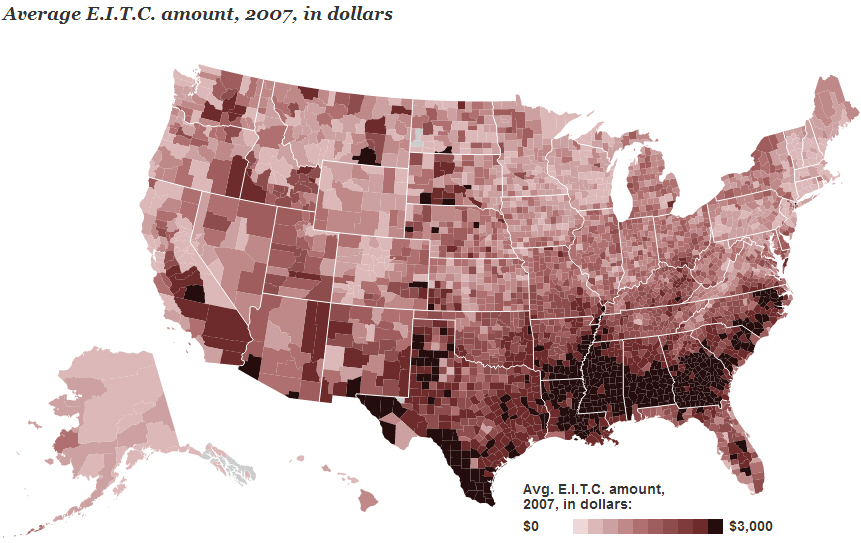 Map: EITC in Your County

The EITC is only available to low-income workers, and phases out as taxpayer income increases. The value of the credit is not only based on income, but family structure as well: taxpayers with children receive substantially larger benefits relative to those without. Since these income and demographic characteristics vary across states and counties, there is wide variation in EITC take-up across localities. The remainder of this brief describes this variation in greater detail, using IRS data from 2007.

The regional variation in the EITC is stark. The counties with the highest share of taxpayers taking up the EITC are overwhelming located in the Southeast. As can be seen in the accompanying map, a large share of counties in Alabama, Georgia, and Mississippi have over half of their taxpayers claiming the EITC. With few exceptions, almost all counties with high rates of EITC take-up are located in the South. Relative to the South, the Northeast and the Midwest have much lower rates of EITC take-up. Moreover, average EITC benefit closely follows the pattern for share of taxpayers taking up the credit.