As expected, the Federal Reserve continued its tapering process, slowing monthly purchases of Treasuries and mortgage-backed securities another $10 billion to a total of $65 billion per month. Why has the taper, in combination with some weaker data coming out of China, led to a selloff in some emerging markets such as Brazil, Turkey, Indonesia and South Africa? Figure 1 depicts the recent slide in the Brazilian Real, Turkish Lira, Indonesian Rupiah and South African Rand against the U.S. Dollar since Bernanke started discussing tapering on May 22nd 2013 (a higher number indicates a weaker currency).[1] 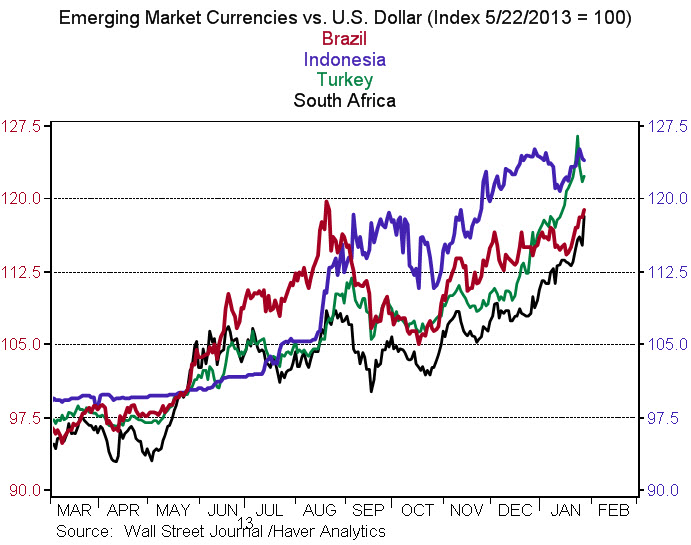 As I discussed in my piece “When Good News Really is Good News,” ultra-low interest rates led to a search for yield with investors flocking into higher yielding and riskier emerging market assets (Figure 2). These flows aren’t necessarily bad as diversification into faster growing economies is beneficial to both investors and the recipient countries. The risk is that the recipient countries don’t have economic structures and financial markets which are equipped to handle what can be massive flows relative to the size of these economies. For example, in the 12-months ending 2013Q3 foreign investors poured over $15 billion into the $888 billion Indonesian economy. 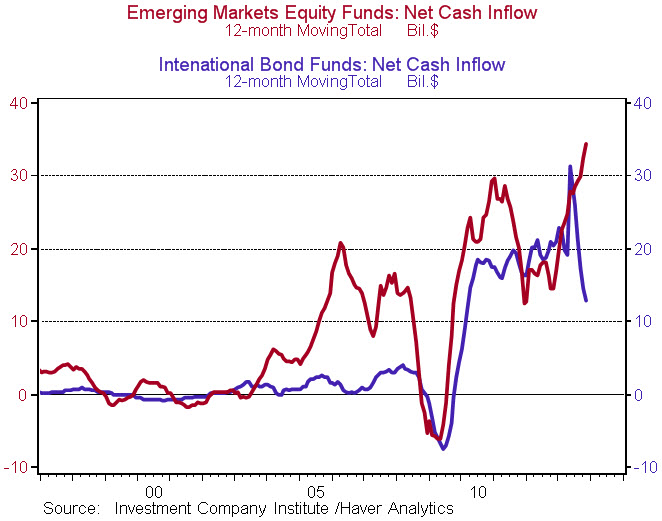 Flows of this magnitude can lead to economic imbalances, a typical one being large international trade or current account deficits. That’s when a country is effectively consuming or investing more than it is producing and borrows money from abroad to finance the gap. Current account deficits are not necessarily bad as a country may be borrowing money to invest in future productive capacity. Countries often run into problems when the money starts flowing into less productive parts of the economy, with consumption and/or real estate booms a likely culprit. At the same time current account deficits grow.

Large current account deficits mean that countries are dependent on foreign investment to fund a significant amount of their economic activity. The risk is a ‘sudden stop’ of capital inflows – either the result of foreign investors questioning the efficacy of their investments and/or because less-risky alternatives have become more attractive. Unfortunately, both can happen quite rapidly at the same time. Currency is the typical relief valve which facilitates the rebalancing. Money flows out of the economy weakening the currency and ultimately making the economy more competitive and domestic investment more attractive. However, the adjustment is often painful with overheated sectors slumping and the economy contracting.

This is exactly the process that the recent taper talk and ultimately its realization may have initiated. Global investors began to rethink their investment strategies as the potential returns on U.S. assets increased. Who is likely to get hit hardest? The economies with the largest imbalances who have become most reliant on foreign capital.

Figure 3 indicates that the Brazilian and Indonesian current account deficits are at levels not seen in over ten years. The last time their deficits surpassed this level, these countries had currency crises. South Africa and Turkey have much larger holes to fill, though relative to history their currencies are substantially weaker than in Brazil and Indonesia, so the adjustment-process is already in train. 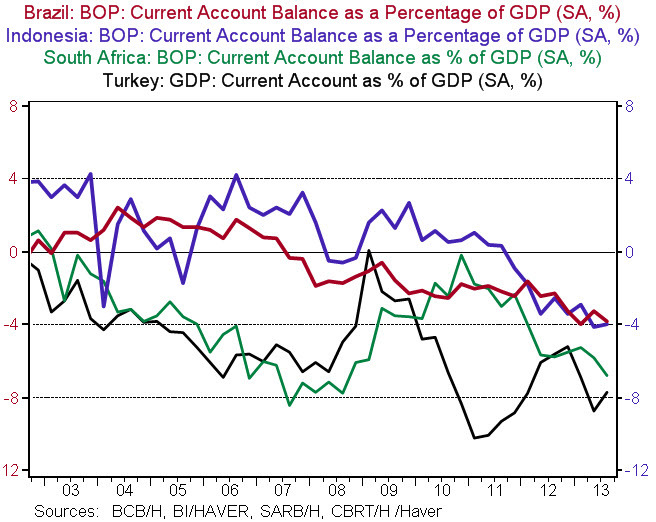 Another indicator of imbalances is high and rising inflation as strong domestic demand outstrips supply. Despite a disinflationary impulse coming from the developed world, many emerging market countries, and in particular these four economies, are experiencing significant inflationary pressures (Figure 4). While inflation expectations may not have become unanchored, inflation is at the high end or above their central bank’s inflation target zones. This is problematic because high levels of inflation lower the real or inflation-adjusted return on investments and make these countries less attractive to foreign investors. 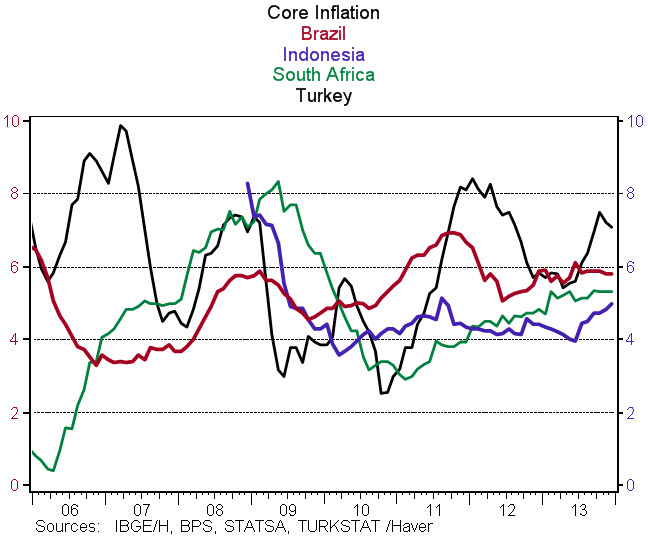 In order to deal with low and declining inflation-adjusted returns, Brazil and Indonesia have been raising interest rates since the sprint of 2013. South Africa and Turkey just raised interest rates yesterday in order to stem the currency rout, with Turkey hiking rates by an aggressive 5.5 percentage points (Figure 5). This seems to have worked for Turkey, but the market’s negative response to the meager 0.5 percentage point increase in rates for South Africa suggests much more will be needed to attract foreign capital (Figure 1). 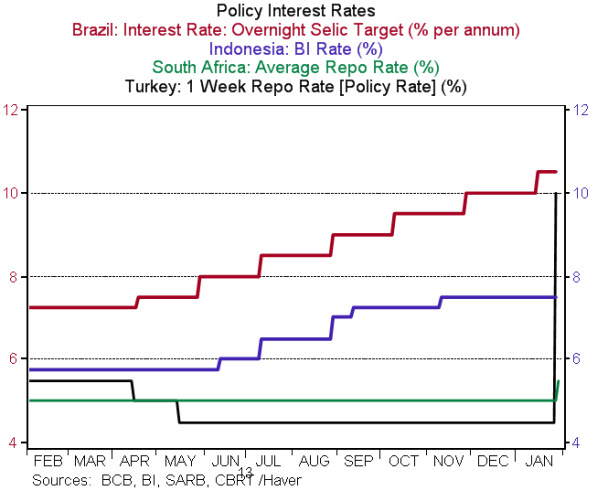 While many emerging market economies are feeling some pain, I’ve focused on these four economies because of their size and the magnitude and trend of the imbalances. The good news is that over the last 10 years all of these economies have become more resilient to sudden stops in capital flows. Furthermore, foreign reserves which act as both a deterrent and a cushion against sudden stops, have grown substantially and now stand at over 10% of GDP (Figure 6). These countries could easily finance their current account deficits for at least a year if needed, though there are reports that Turkey used $19 billion, or a little over 2% of GDP in an intervention to strengthen the Lira. 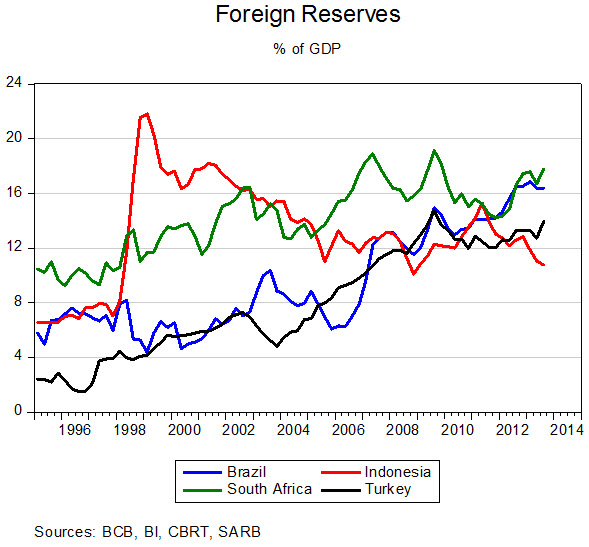 I contend that the link between weaker Chinese and the current swoon is a red herring. Brazil, South Africa and Indonesia are large commodity exporters. However, Turkey, the country which market participants point to as being at greatest risk, is a commodity importer, with almost a quarter of its current account deficit coming from imported energy. A weaker China and the potential for lower energy prices should be beneficial to Turkey.

What is the likelihood of contagion from these emerging markets to the developed economies and financial markets? In my opinion, the risk is low. The significant imbalances which were evident prior to the Global Financial Crises have been narrowed. The U.S. current account deficit has gone from over 6% to 2.25% of GDP. Meanwhile, the Chinese surplus has fallen from over 11% of roughly 2% of GDP. Brazil, Indonesia, South Africa and Turkey are the notable outliers. The fact that these issues are being raised now likely means that when the Fed eventually raises rates, these imbalances will have been mitigated. A temper tantrum today is better than a full blown explosion later.

[1] While Argentine markets have been hit hard during the recent period, I excluding them from this analysis because their macroeconomic policies have been so non-standard and the political issues so significant that it is hard to even compare them to other emerging markets economies.

The nuanced relationship between cutting-edge technologies and jobs: Evidence from Germany

Sabrina Genz
Thursday, May 5, 2022
Get daily updates from Brookings