U.S. policymakers continue to engage in an active debate over the minimum wage. Calls for minimum wage increases—at the federal, state, and local levels—are based on the premise that rises in the minimum wage will improve the economic well-being of low-paid workers. This has become an important policy prescription in movements to combat poverty.

One area of focus in the debate is whether a minimum wage increase would actually affect many workers. Some skeptics have argued that only a very small share of workers actually receive the minimum wage, and furthermore, that many of those workers are not struggling adults, but rather teenagers from affluent families. Understanding the magnitude of the impact of a federal or state-level minimum wage increase on workers is an important first step in informing the policy debate.

The argument that only a small share of workers is actually paid the minimum wage misses a key point: many of those who would be impacted by a raise in the minimum wage are actually low-wage workers making slightly above the minimum wage. In addition to this broader scope of the workforce, economist Arin Dube of the University of Massachusetts-Amherst points out that a shrinking share of low-wage workers is comprised of teenagers. His work shows that among those earning no more than the federal minimum wage of $7.25 in 2011, fewer than a quarter were teenagers. Among those earning less than $10 an hour, only 12 percent were teenagers, as compared to 26 percent in 1979.

In this month’s Hamilton Project economic analysis, we consider the likely magnitude of the effects of a minimum wage increase on the number and share of workers affected. Considering that near-minimum wage workers would also be affected, we find that an increase could raise the wages of up to 35 million workers—that’s 29.4 percent of the workforce.For the purpose of this analysis, we set aside the important issue of potential employment effects, which is another crucial element in the debate about an optimal minimum wage policy. We also continue to explore the nation’s “jobs gap,” or the number of jobs needed to return to pre-recession employment levels.

Using data from the Bureau of Labor Statistics, combined with information on the binding minimum wage in each state, we are able to calculate these shares. Just 2.6 percent of workers are paid exactly the minimum wage, but 29.4 percent of workers are paid wages that are below or equal to 150 percent of the minimum wage in their state. Furthermore, the hours worked by this group represent nearly one-quarter—24.7 percent—of hours worked, which indicates that a large share of the impacted group is working close to full time hours.

The Ripple Effect by State


Overall, up to 16.0 million workers would likely see a raise in their wages if the minimum wage were increased in these states. 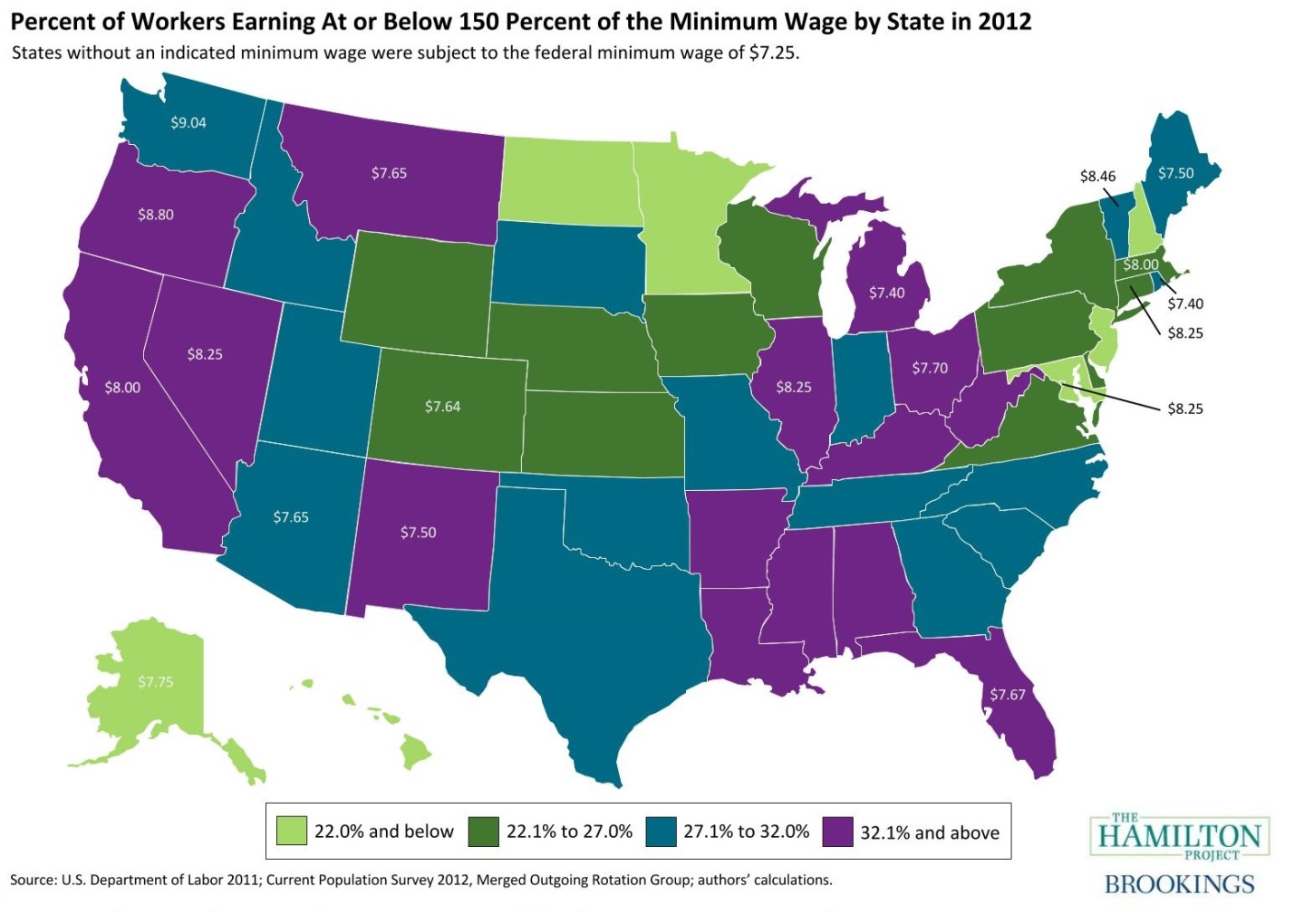 As of December, our nation faces a jobs gap of 7.8 million jobs. The chart below shows how the jobs gap has evolved since the start of the Great Recession in December 2007, and how long it will take to close under different assumptions of job growth. The solid line shows the net number of jobs lost since the Great Recession began. The broken lines track how long it will take to close the jobs gap under alternative assumptions about the rate of job creation going forward. 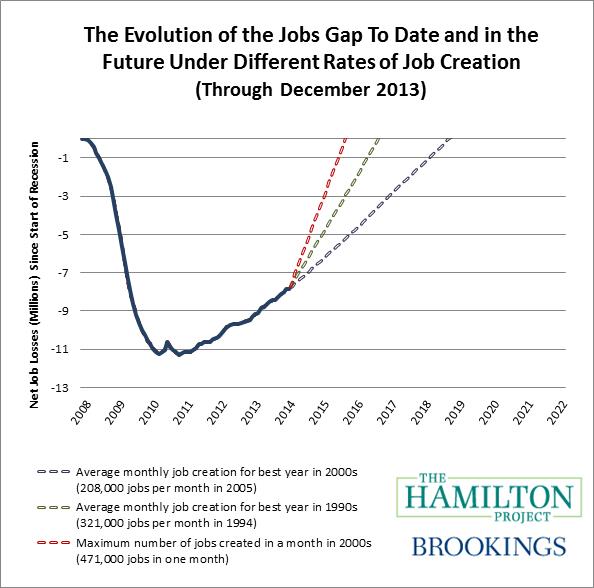 The minimum wage debate currently underway tends to narrowly focus on those workers making exactly the minimum wage. This approach misses a large number of low-wage workers whose wages would likely be raised through a ripple effect resulting from an increase in the minimum wage.

As our economy continues to recover, a minimum wage increase could provide a much-needed boost to the earnings of low-wage workers. A significant 35 million workers from across the country could see their wages rise if the minimum wage were increased, allowing them to earn a better livelihood and lead more economically secure lives. When discussing the minimum wage, this is the magnitude of the impact that policymakers should consider.

[1] Throughout this analysis we only consider non-self-employed workers age 16-64. By our calculations, the size of that workforce was 122.2 million workers in 2012.