The Supplemental Nutritional Assistance Program (SNAP) is our nation’s most important anti-hunger program. Last year, the program distributed $75 billion in benefits to nearly 46.6 million people. These benefits had a remarkable impact on the prevalence of poverty in the United States. By including food stamp benefits in income, SNAP was estimated to keep 4.9 million Americans—including 2.2 million children—out of poverty in 2011. Similarly, the program also had an outstanding impact on the poorest of Americans, reducing the number of Americans in extreme poverty by half—from 1,600,000 to 857,000 in 2011.

Recent policy debate around SNAP has focused on the program’s provision of benefits to able-bodied adults without dependents, more commonly referred to as ABAWDs. In particular, there is concern among some policymakers and observers that the program is too generous and may serve as a disincentive to work. However, the characterization of SNAP as a program that discourages work on a wide scale for childless adults is not well-founded for several reasons. First, nearly nine out of ten SNAP recipients live in a home with at least one child, one disabled individual, or one elderly individual. Second, SNAP simply does not provide enough benefits to support a comfortable life without work. In periods of normal labor markets, most adults can only receive three months of benefits every three years if they are unemployed. Even then, the average benefit is less than $1.40 per meal—hardly enough to entice a worker to forego employment. Finally, many Americans rely on SNAP as a temporary support system when income is low, not as a permanent benefit. In any given year, most Americans will not participate in SNAP—prior to the Great Recession, participation rates peaked at 11.6 percent. But, about half of Americans will rely on SNAP at some point between the ages of twenty and sixty-five.

In this month’s economic analysis, The Hamilton Project focuses on two critical issues related to SNAP. The first is the widespread existence of both food insecurity and obesity among low-income children in the United States. Unfortunately, many children suffer from either or both of these conditions, and prevalence rates are especially high in particular regions of the country. The second critical issue we highlight is the role of SNAP in fighting poverty during times of weak labor markets. SNAP participation rises and falls in lockstep with the unemployment rate, highlighting SNAP’s role as a safety-net program that bolsters family resources when employment and wages are low.

Food insecurity is the most commonly used measure of food deprivation in the United States. The United States Department of Agriculture (USDA) defines the term as “limited or uncertain availability of nutritionally adequate and safe foods or limited or uncertain ability to acquire acceptable foods in socially acceptable ways.” When families report that they struggle to secure an adequate diet, members of that family are considered “food insecure.” This could mean that the children in that family do not eat for a day or two, or it could mean that the parents forego meals in order to feed their children. Children living in food-insecure households can also be obese. This is not necessarily surprising, given that one way to financially cope with food insecurity is to consume relatively less-expensive, highly processed, high-calorie foods, instead of more-expensive fresh produce.

Food insecurity exists everywhere in the United States, with 16.4 percent of households reporting conditions indicating food insecurity. The rate of food insecurity among children, at 22.4 percent, is even higher. The highest rates of child food insecurity in the country are found in New Mexico (30.6 percent) and Washington, D.C. (30.0 percent). Even in the most food-secure state in the country, North Dakota, one in ten children lives in a food-insecure household. Furthermore, as represented by the teal and purple states in figure 1 below, in 37 states and the District of Columbia, more than one in five children lives in a food-insecure household. 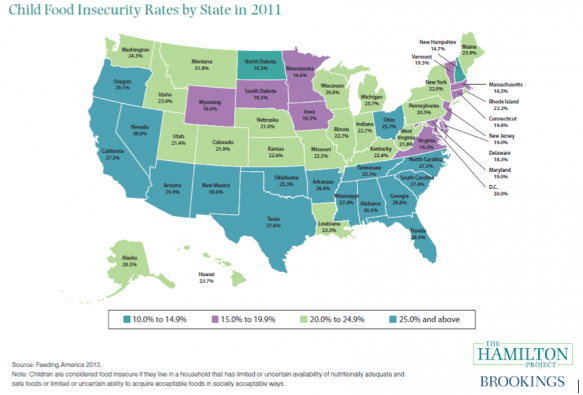 These food-insecurity rates were measured in 2011 when SNAP benefits were temporarily 13.6 percent higher due to a provision in the American Recovery and Reinvestment Act of 2009. If SNAP benefits had not been expanded, the rates of food insecurity almost surely would have been even more severe. The recent expiration of the temporary expansion in SNAP benefits and further proposed cuts to the program by Congress threatens to make the problem of child food insecurity even worse.

SNAP is a key program for providing assistance to Americans when they need support the most. This can be seen in the correlation between SNAP participation and unemployment rates in figure 2 below: SNAP participation rises during economic downturns and falls during recoveries. In 2013, the average participation rate for SNAP was 19.4 percent of the U.S. population, serving 47.7 million individuals each month, compared to a pre-recession participation rate of only 11.3 percent in 2007. As shown in the figure below, SNAP historically has tracked rates of unemployment and economic downturns closely (denoted by the teal dotted line and gray bars, respectively). 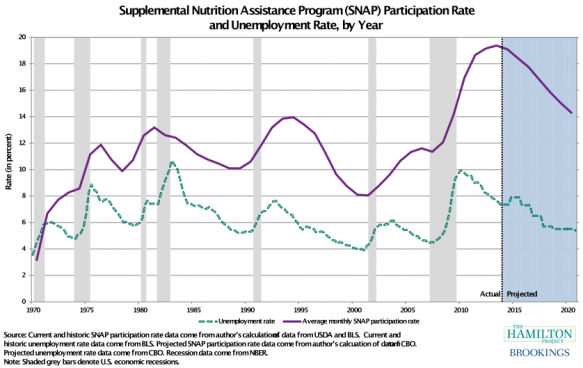 In recent years, use of food stamps has become increasingly responsive to economic fluctuations. This means that as unemployment increases—as it did drastically between 2007 and 2011—participation was also expected to increase. It is unsurprising, then, that SNAP participation rates increased as much as they have over the past five years; as the unemployment rate increased 93.5 percent between 2007 and 2011, SNAP participation rose by 64.4 percent over the same period.

As seen in the projected data in the shaded blue area in the figure above, SNAP participation rates are expected to fall as the economy continues to recover, as would be expected based on the pattern observed in previous recessions. By 2020, the participation rate is projected to revert to 2009 levels—about 14.3 percent of the population. See the technical appendix for a description of the calculations behind this and other figures cited in this report.

Food insecurity and obesity are just two of the many struggles endured by low-income families in America, including those living in poverty at a given moment in time and those in the lower-middle class, often on the edge of poverty. On December 4th, The Hamilton Project will release three new papers and host a forum to highlight challenges faced by struggling lower-middle-class families.

The first panel in the forum will focus on a new proposal by Diane Whitmore Schanzenbach of Northwestern University to strengthen SNAP.  Schanzenbach makes the case for protecting and maintaining existing budget resources and also offers five reforms that could strengthen SNAP, including incentives for healthier foods to promote better nutrition and a number of changes to the benefit formula.

A second panel will feature a new proposal by Melissa Kearney and Lesley Turner of the University of Maryland for a secondary-earner tax deduction targeted at lower-income, dual-earning families with children in order to help “make work pay.”

For the full agenda and to register for the event, click here. The new papers will be available on The Hamilton Project website (www.hamiltonproject.org) at 8:00 a.m. on December 4th.