In a recent posting, “Debt Ceiling Drives Schizophrenic Treasury Market,” I introduced a calculation which estimates the market’s expectations of Treasury payment delays should Congress and the White House not agree on the debt ceiling. Though it looks like Washington has come to the realization that playing politics with the full faith and credit of the U.S. government is a mistake, given the current standstill, it is possible that an increase in the debt ceiling may not be fully in effect by the October 17th drop-dead date. As a result, I update and extend some of the work done in that earlier piece and discuss the dangers of any delay in payments even on the shortest-term Treasury instruments.

Figure 1 illustrates that longer-term Treasury yields have started to rise, probably as a result of debt ceiling fears. The very short-term curve remains downward sloping suggesting the greatest concern is for interest rates that are maturing over the next few months. As discussed in my last article, I believe the U.S. has the ability to meet all of its obligations once the government’s borrowing capacity is increased. Thus the increase in interest rates is a reflection of expected delays in payment rather than a loss in principal and interest—which some analysts have called a “technical default.” Assuming this is the case, we can estimate the market’s expectation of the number of days of extra interest that the U.S. government will have to pay after it goes into arrears. 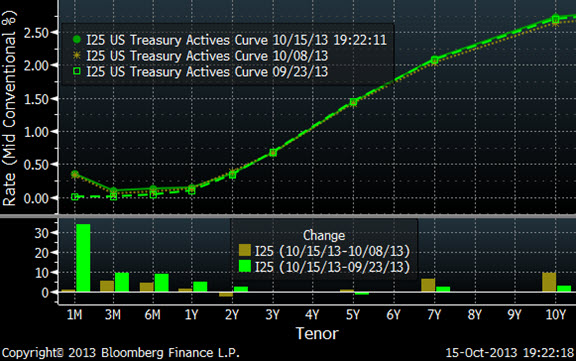 Figure 2 charts the estimated number of days of arrears for Treasury bills maturing on October 17th, 24th, and 31st, as well as November 7st and 14th.[1] Why does the October 17th bill maturing on the expected drop-dead date have such a low estimate of delay? Probably because the Treasury cash balance is high enough ($34.9 billion) so that even if the debt ceiling isn’t extended by then, the Treasury is likely to have enough money to meet all its expenditure and interest obligations (Figure 3). Treasury securities maturing the next week are a much tougher call. Most analysts believe that if the debt ceiling is not extended by the end of October, the Treasury will not be able to meet all of its obligations. 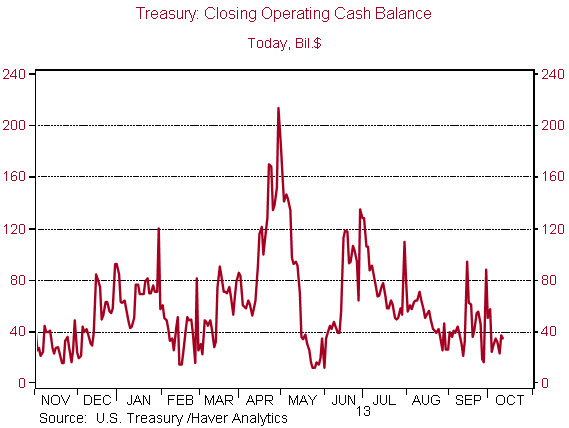 This view is supported by my analysis which estimates that the Treasury bill maturing on October 31st has the longest period of expected arrears—now 60 days—up 10 days since the October 8th estimate. In other words, the market believes that holders of this security won’t be paid in full until late December. The November 7th bill has 10 fewer days of expected delay, also suggesting a late December expected resolution. As maturities extend further, the number of expected days of arrears continues to decline, converging on that late December time period. Thus as noted in the previous piece, the market expects very few long-term consequences from a period of arrears.

I disagree with that optimistic view. Treasury securities underpin many of the transactions of the global financial system. Their risk-free nature makes them the collateral of choice for repurchase agreements (repos) – short-term collateralized loans which market participants use to finance transactions such as bond offerings, IPOs or even short-term loans to meet company payroll. Based on Federal Reserve Bank of New York data, repurchase agreements using Treasury securities as collateral total roughly $2 trillion daily. If counterparties start to question the value of Treasuries as collateral, the financial markets could freeze up well beyond anything seen in 2008. At that time, market participants were uncertain about the value of what were already seen as risky assets, and ones which were a relatively small share of the repo market. Imagine what the financial markets will do if that happens to the largest source of collateral, and one which was previously seen as risk free (see Figure 4 below which depicts the Tri-Party repo market, a relatively small but growing share of repo market where agency securities are more heavily represented).[2]

Figure 4: Change in Collateral Composition of the Tri-Party Repo Market 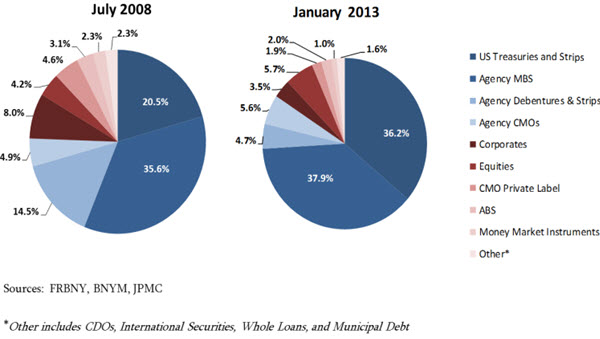 There is precedent for a U.S. technical default, but it may have ended better last time than it will now. In April and May of 1979 some individual investors in U.S. Treasury bills were not paid in full at maturity. The circumstances behind the default were unfortunately quite similar—a “failure of Congress to act in a timely fashion on the debt ceiling legislation in April, and on an unanticipated failure of word processing equipment used to prepare check schedules.”[4] Ultimately, those investors were made whole with additional interest to cover the delay. But according to the research cited below, the April event led to an immediate 0.60% jump in Treasury bill interest rates, which remained elevated for several months. The market impact today may be similarly limited, though a larger swath of investors are at risk and the financial markets are substantially more complicated and intertwined.

Perhaps, as some news reports suggest, market participants are shunning those Treasury securities that are most likely to be affected, and by doing so avoiding any of the potential contagion effects described above. But once Washington has shown its willingness to cross the Rubicon on even a technical default, market participants may start to question the safety of those longer-dated securities. The potential financial market chaos that might ensue would be disastrous for our still fragile economy.

[1] Please see the previous piece for more details on the calculation and underlying assumptions. At that time,I discussed a range of dates for the October 31st Treasury bill. In order to present multiple securities, I charted the mid-point of arrears days in Figure 2.

[2] Unfortunately, detailed historical data on the entire repo market are not readily available.

[On provisions related to cybersecurity in USMCA and a digital trade agreement between the U.S. and Japan] It's about information sharing and so forth, but I think it's clearly the beginning of what I would expect to be a more elaborated set of ways that trade partners can cooperate on cyber issues, because I think this will be an increasingly important part of trade policy going forward.

Multinational Corporations in the 21st Century