I just returned from a week in China where the conversation continues to revolve around whether the economy needs to rebalance away from excessive reliance on investment, towards household consumption, and, if so, what reforms would enable this transformation while maintaining a healthy growth rate. While in Beijing, I had a couple of opportunities to present a new paper that looks at China’s rebalancing challenge in light of the earlier experiences of Japan, South Korea, and Taiwan. According to the recently released Penn World Tables version 8, China’s PPP GDP per capita is 2011 was about the same as Japan’s in 1970, Taiwan’s in 1982, and South Korea’s in 1987. All of those economies continued to grow well for at least a decade after reaching China’s current stage of development so it may be instructive to look at their experiences. 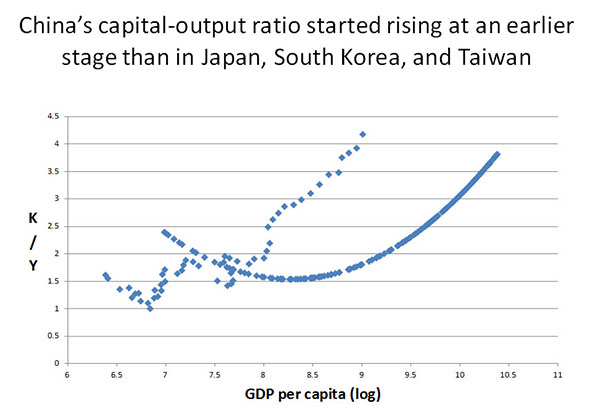 Japan, South Korea, and Taiwan had a number of striking similarities. They all had strong catch-up with the technology level (or total factor productivity) of the USA, sustained until they reached high income. This was key to maintaining high productivity of capital, even though they were accumulating capital rapidly. The curve in the figure above shows the average experience of Japan, South Korea, and Taiwan in terms of the capital-output ratio, as their per capita GDPs rose. The capital-output ratio indicates how much capital is needed to produce a given level of output; it tends to rise with development. The East Asian industrializers were able to maintain low capital-output ratios (that is, high productivity of capital) for a long time because their technological advance was so strong. That high return to capital in turn encouraged high investment rates, peaking around 35% of GDP. During the period of high investment the three typically had trade deficits so that they were borrowing from abroad to fuel their investment. Eventually, the catch-up process naturally comes to an end, and it can be seen in the figure that as they reached high income the productivity of capital in Japan, South Korea, and Taiwan then fell. Investment rates responded by falling about 10 percentage points, and these economies shifted from trade deficits to trade surpluses. In that sense they all rebalanced away from investment towards external demand.

China’s experience follows the others fairly well for about 20 years after the beginning of reform and opening up. In the past 15 years, however, China’s model has diverged from the earlier industrializers. In particular, China’s capital-output ratio started rising sharply at an earlier stage of development. Simply put, China has been growing at rates similar to the earlier industrializers, but it has taken much more capital to achieve this. Its investment rate in recent years has been around half of GDP; at that rate the capital stock doubles in six years. Using more capital to grow at about the same rate means that Total Factor Productivity growth is lower than in the earlier experiences. Macro and micro evidence both point to falling productivity of capital in China so that it would take higher and higher investment to maintain growth rates with the old model. Another feature of the Chinese model is that it developed trade surpluses at an earlier stage of development. If both investment and net exports are significantly higher than in the earlier experiences then something else has to be significantly lower: and that something else is household consumption. In China’s national accounts household consumption was 36% of GDP in 2011, more than 15 percentage points below the consumption levels seen in the other economies at this stage of development.

My conclusion from this comparison is that, in order to sustain growth and continue to develop, China faces inter-related challenges on the supply and demand sides. On the supply side, the economy needs to generate more productivity growth and reduce wasteful investment; on the demand side, as investment comes down, the logical place to find new demand is consumption. China still has a large trade surplus in a world where its main trading partners are growing slowly. So a growing external surplus is not likely to be a main source of demand for China. In terms of the policy agenda, there are institutional features that bias the system towards investment and away from household income and consumption: the hukou system limiting rural-urban migration; the closed service sectors of the economy in which state-owned firms earn rents and reinvest them; the repressed financial system which acts as a tax on households and a subsidy to investment; and the reward system for local government which prioritizes investment and growth (and provides rent-seeking opportunities in the large-scale investment projects). Reforms in all of these areas will be discussed in and around the Third Plenum later this year, and it will be fascinating to see what the new government’s reform plans are.