During the election cycle, many politicians and media outlets blamed failure in Washington on politics as usual. This common campaign theme serves more as a political pitch than the identification of a real problem. In fact, politics as usual is a nice departure from the politics of the last two years. Leading up to the 2012 presidential election, compromise was seen as anathema within the GOP, and gridlock was viewed as the best means to defeating the president’s reelection.

House Republicans saw the path to political glory paved with stalled legislation, and by wrapping themselves in opposition to an unpopular president, perpetuated a comprehensive though ultimately unsuccessful strategy. In the end, President Obama was reelected, and the ramifications of that change in political environment were nowhere more obvious than the fiscal cliff bill.

The fiscal cliff bill was not a continuation of blanket opposition to the president. Nor was the vote, as many analysts have suggested, indicative of a severely fractured House GOP conference. Instead, the vote illustrates politics as usual: Congressmen voting according to the needs of their constituencies. The table below shows that Republican House Members from Blue States provided the large majority of the Republican votes in favor of the fiscal cliff deal (80 percent). In fact, a majority of Blue State Republicans voted in favor of the deal (53 percent). Conversely, less than 16 percent of Republicans from Red States voted in favor of the deal. 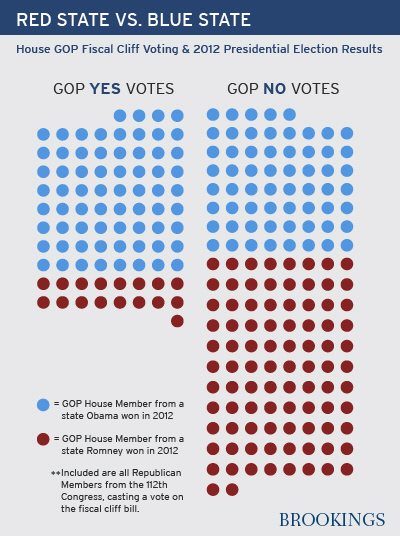 Although results from the state level provide interesting insight into the bill, analysis of district-level partisanship offers more nuance. The next figure shows that Republicans representing districts Obama won in 2008 voted overwhelmingly in favor of the fiscal cliff deal. Moreover, nearly half of the Obama-district Republicans voting no, were lame ducks, free of electoral constraints after suffering defeat in 2012.

Similarly, as Congressional districts become more Republican-leaning, the likelihood of a GOP House Member voting “no” increases. In districts McCain won by 10 percent or less, 61 percent of GOP House Members opposed the fiscal cliff deal. That figure increases to 71 percent in districts McCain won by more than 10 percent. In fact, even using Charlie Cook’s more complex and nuanced measure of district partisanship (the PVI or Partisan Voting Index), the same results hold. 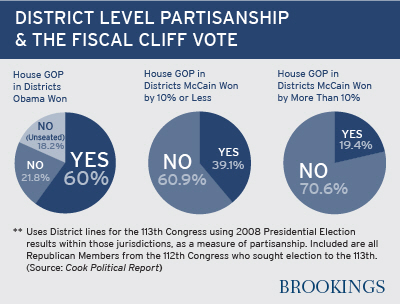 These results should not come as a surprise. Republicans representing conservative districts tended to vote against the fiscal cliff deal. Republicans representing more moderate or liberal districts tended to vote in favor of the deal. However, given the behavior during the 112th Congress in which Republicans strongly opposed the president’s legislative interests, these results are encouraging. They suggest House Republicans may depart from a holistic drive to defeat the president, preferring instead to represent the interests of their districts. Politics as usual may sound like a damning problem plaguing Washington, but in reality it may be its saving grace.

Economic relief and stimulus: Good progress but more work to do

Enhancing the liquidity of U.S. Treasury markets under stress