Last week, the Fed announced its intention to keep interest rates at historic lows until the unemployment rate drops below 6.5 percent, so long as projected inflation remains below 2.5 percent. The Fed has now explicitly linked its interest-rate policy with future economic conditions.


But how long it will take to reach 6.5 percent?


In today’s analysis, The Hamilton Project presents a range of estimates of when the unemployment rate will reach the Fed’s benchmark. The chart below shows how long it will take to reach an unemployment rate of 6.5 percent based on different assumptions of monthly job growth. 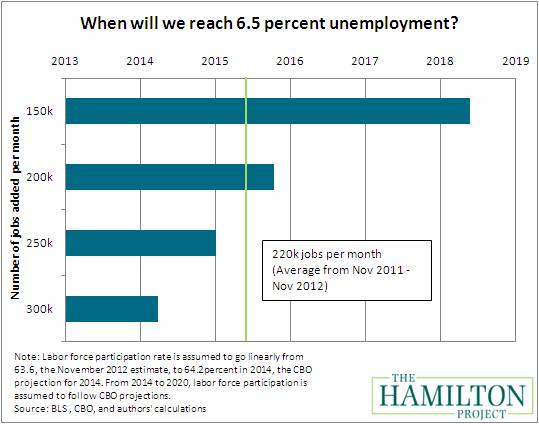 While the Federal Reserve has set its benchmark at 6.5 percent, that is significantly higher than the unemployment rate in the year before the start of the Great Recession, which never exceeded 5 percent. Returning to pre-recession normal will necessarily take even longer.

The Hamilton Project’s “jobs gap” calculator allows you to explore how long it will take to return to the pre-recession employment rates, rather than unemployment rates, at various levels of job growth each month. The jobs gap calculator can be found here, and the state-by-state breakdown of the jobs gap, updated each month, can be accessed here.