The last few months have seen a mounting consensus among experts that the housing market has bottomed out and begun to recover. Having waited years for this turning point, people have rightly made much of the development. The term “bright spot” abounds in the recent news coverage.

But, our optimism should be tempered. As yet, the gains in housing construction, home sales, and home prices have been quite modest in comparison to the spectacular drops we saw earlier. For example, the rate at which builders are starting single-family homes has retraced only about 10 percent of its earlier plunge. At a little above 500,000 units (at an annual rate), the recent pace of housing starts is much less than half that seen in the late 1990s, prior to the beginning of the housing boom.

The current low levels of housing activity suggest a lot of scope for growth that could stoke the broader recovery. In fact, though, the pick-up does not seem to be happening fast. The pace of single-family housing starts has risen only about 100,000 since the summer of 2011. Housing investment has contributed only a couple of tenths of a percentage point to overall GDP growth over the last year, and there has been little change in the number of jobs in residential construction.

The relatively meager gains in home prices in recent months are also not doing much to support economic growth. During the housing boom, rapid home price appreciation led to large increases in household wealth, which, in turn, gave many homeowners both the willingness and wherewithal to spend voraciously. The plunge in home prices between late 2006 and early 2009 caused roughly $6 trillion of household wealth to evaporate, the equivalent of about 7 months worth of after-tax income. Data released by the Federal Reserve this week show that aggregate housing wealth, like home prices, has continued to show very little rebound (see Figure 1). A much bigger turnaround will be needed to see significant “housing wealth effects” on economic growth. 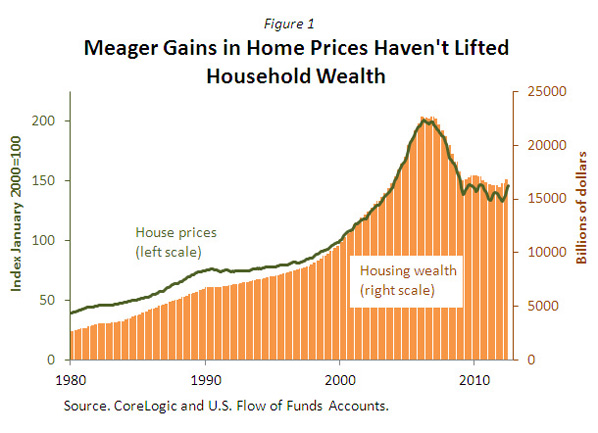 Moreover, the lack of rebound in home prices is not helping the 11 million “under water” homeowners for whom the value of their mortgage exceeds the value of their home: Their excess leverage is making it difficult for them to finance spending with new borrowing and, in many cases, to realize lower mortgage payments by refinancing into lower-rate loans.

When it comes to thinking about ways to hasten the recovery in housing, policymakers might take note of the similar pattern of single-family housing starts across the four regions for which the Census Department releases data. In all regions, housing starts moved sideways after the bust, with some modest uptilt over the past year or so (see Figure 2). The similarity occurs despite important differences in the employment situation and borrower distress across regions, providing support to the view that addressing broad issues—such as the high rate of joblessness, impediments to lending, and uncertainty about future economic conditions and policies—is key to boosting activity. 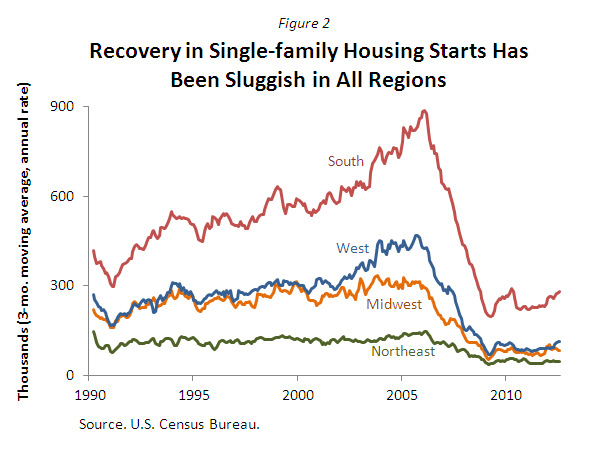