As tax time approaches, many are debating whether high-income taxpayers should pay more or whether their tax rates are already too high. This debate is particularly relevant today because of the economic struggles many Americans are experiencing, and because of the longer-term trend of rising inequality. A host of economic forces, like changes in technology, increases in international competition, and other changes in the labor market, such as the decline of unions and a falling real minimum wage, have reduced job opportunities and wages for some American workers, but expanded opportunities and incomes for others.  In fact, the earnings and market incomes of many middle-class and lower-income households have stagnated and even declined over time, while incomes at the top of the income distribution have risen dramatically. The United States has traditionally boasted a progressive tax code—one in which the tax rate increases as income increases.  A key question for policymakers, then, is how the tax system should respond to the current challenges—how progressive should the tax code be?

The purpose of any tax system is to raise revenues to fund government programs. But the challenge to designing a good tax system is raising revenues in a way that minimizes economic harm. That means being concerned not just with economic incentives in the tax code, but also the ability to pay of hard-hit middle- and lower-income households, whose incomes and employment prospects have been hurt by economic forces beyond their control. By basing tax rates on income and one’s ability to pay, a progressive tax system prevents these households from suffering the double burden of hard economic times and higher taxes.

The figure below shows how much influence taxes and transfers have in reducing inequality (measured using a common metric called the “Gini coefficient”) in various countries around the world. As indicated in the chart, the U.S. tax and transfer system does less to counteract pre-tax income inequality than the tax systems of most of our peer countries, meaning that our system is actually less progressive. 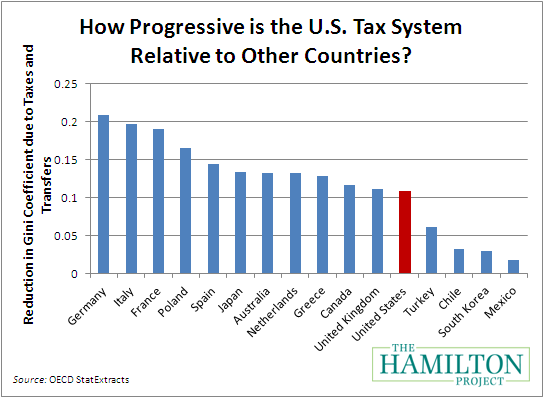 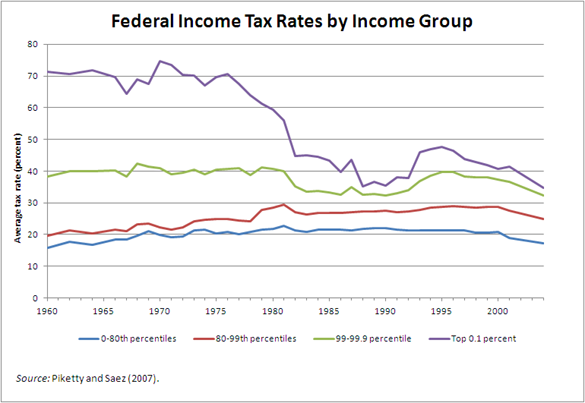 This decline in tax rates for the wealthy has coincided with an increase in income inequality, where most of the wage gains have been concentrated among a relatively small portion of the American people. For example, since 1979, earnings for households in the top 1 percent of the income distribution have risen by over 250 percent. At the same time, many households at the middle and bottom of the income distribution have experienced stagnating incomes or even declines in earnings (figure below, blue bars). This means that the very people who have received the biggest income gains in the past three decades have also seen the largest tax cuts (figure below, red bars). 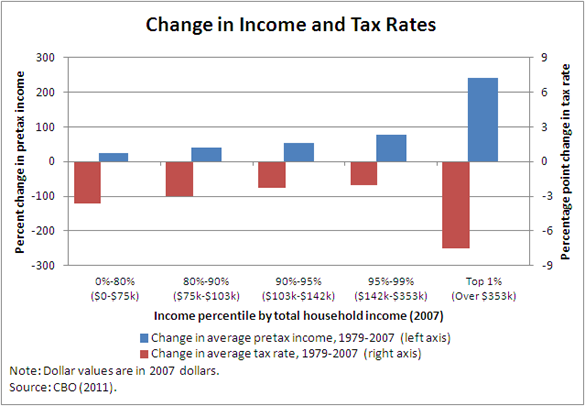 In 1979, the top 1 percent of Americans earned 9.3 percent of all income in the United States and paid 15.4 percent of all federal taxes. While the share of income earned by the top 1 percent had more than doubled by 2007—to 19.4 percent—the share of federal tax liability paid by that group only increased by about 80 percent, to 28.1 percent. The share of taxes increased less for this group because high-income tax rates fell by more than the tax rates for everyone else—reductions that made the system less progressive.

A final factor, discussed in The Hamilton Project’s April Jobs Blog, is that federal taxes account for only part of the tax burden: the tax system is even less progressive when state and local taxes are factored in, because those systems tend to be regressive. For instance, families in the bottom fifth of the income distribution face state and local tax rates of 12 percent, compared to tax rates of only 8 percent for the top 1 percent of families (Citizens for Tax Justice 2011).

Why should we care about a less progressive tax system? The evidence suggests that the causes of rising income inequality arise in large part because of changes in patterns of trade and globalization, technological advances, and other economy-wide factors.  These economic changes have raised the incomes of high-skill workers and business and capital owners, but impaired or reduced the earnings of others—for reasons beyond their control. A progressive system distributes the risks of economic changes by basing a family’s tax burden on their ability to pay.

Furthermore, the rise in income inequality is also reflected in rising consumption inequality, meaning that households truly are becoming more unequal as indicated by primary measures of wellbeing, such as expenditures on food (Attanasio, Hurst & Pistaferri 2012). This is a real problem for the long-term prospects of the American economy, as rising income inequality—exacerbated by the current tax code—has contributed to a widening opportunity gap for children, resulting in an uneven playing field for future generations of Americans.