Much excitement has been building over what feels like the beginning of an era of immense technological advance, the central role that entrepreneurs will play in its development, and the potential for a wide range of regions to reap the rewards. But progress won’t come easy. Significant challenges are likely to follow as digital technologies expand into relatively untapped areas of the economy.

Two excellent books out in as many months—and a quick data analysis here—persuasively drive these points home.

In The Third Wave: An Entrepreneur’s Vision of the Future, legendary entrepreneur, investor, and startup advocate Steve Case describes the coming era of rapid and far-reaching digital technology disruption. Whereas the First Wave laid the foundation for internet infrastructure, and the Second Wave built key applications on top of it (e-commerce, social media, search, etc.), the Third Wave involves embedding these technologies into virtually all non-digital sectors of the economy, such as health care, finance, agriculture, manufacturing, and countless others.

This has two major implications.

First, Third Wave innovation will require more partnerships and greater cooperation among entrepreneurs, incumbent firms, industry veterans, technologists, regulators, and policymakers. Unlike the young and largely unregulated internet sector in the First and Second Waves, the Third Wave will have to contend with well-established industries with entrenched interests, sector-specific challenges, and often, heavy regulation. Entrepreneurs will no longer be able to act alone. Instead, they will need to build partnerships with a diverse set of stakeholders in ways that previously might have seemed unimaginable.

Second, Case believes that Third Wave entrepreneurs will come from a wide range of regions outside of Silicon Valley. Third Wave innovators will leverage tools from technology hubs, but work within businesses and sectors outside the tech world. Workers from non-technology industries will be well positioned to identify and solve problems alongside technologists and entrepreneurs. This collaboration is central to the future of innovative solutions. Further, advances in cloud computing will allow startups to scale most anywhere—permitting these digitally-enabled businesses to grow within established industrial centers.

In The Smartest Places on Earth: Why Rustbelts are the Emerging Hotspots of Global Innovation, meanwhile, World Bank veteran and investor Antoine van Agtmael and journalist Fred Bakker contend that innovation-driven renewal is currently underway in a number of regions in the United States and Europe well outside of established technology hubs—many of them in Rustbelt regions that have recently experienced decades of economic decline.

A lengthy tour of dozens of regions convinced the authors that an era dominated by cheap labor is giving way to a new one that calls for smart “brainpower”—and innovation. These “Brainbelts” rely on a culture of collaboration and an open exchange of information among a range of actors, including universities, businesses, support organizations, and civic leaders, to name a few. Like Case’s Third Wave, Brainbelts require local partnerships and will emerge in places that have existing industry expertise, such as semiconductors in Albany and advanced materials in Akron.

Data is starting to validate these trends.

I examined the relationship between a region’s overall position as an innovation-driven entrepreneurial hub and its growth in innovation-driven startup formation. In other words, I wanted to know if relatively under-developed regions (in terms of innovative entrepreneurial activity) were experiencing higher rates of growth in the formation of these companies, consistent with the predictions of Case, van Agtmael, and Bakker.

Specifically, I calculated total venture capital investments as a share of GDP in a base year as a proxy for the “density” of innovation-driven entrepreneurial activity, and the change in venture capital “first fundings” (initial rounds of venture investment in a company) in subsequent years as a measure of growth in the formation of these firms. For simplicity, I aggregated the data into eight geographic regions and examined the 2009 to 2014 period. 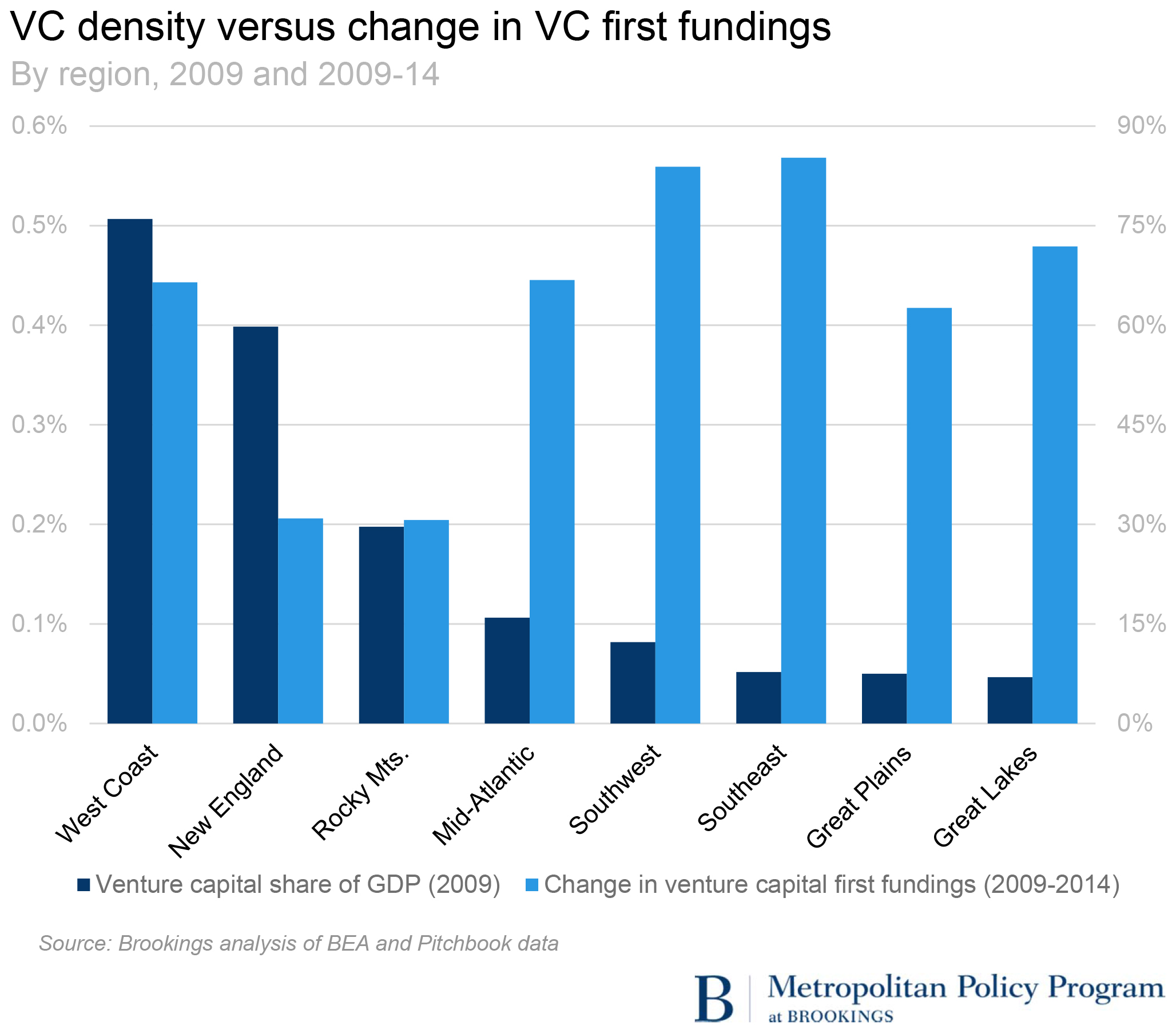 Though not universally true, the data generally show that regions with the least amount of venture capital density at the beginning of the period exhibited the largest growth in startup “first fundings,” which hews predictions of the Third Wave and Brainbelts—namely, that regions with relatively little overall startup capital funding saw the largest increases, in percentage terms, in the growth of early-stage startup capital funding.

That said, it remains to be seen if these trends will be sustained, or if they are simply a blip on the radar, and furthermore, recognizing that venture capital is an imperfect measure of innovative activity. Still, these are encouraging signs for a wider swath of regions as the country embarks on what could be an era of explosive growth and wealth creation.

Antoine van Agtmael is a trustee of the Brookings Institution and a donor to it. The findings, interpretations, and conclusions posted in this piece are solely those of the author and not determined by any donation.