America’s railroads have endured a number of high-profile accidents over the past few months, resulting in widespread service disruptions and economic costs across the country. From Montana to Tennessee to Pennsylvania, several freight and passenger trains have derailed, prompting action on safety from policymakers in Washington and beyond. Rapidly aging and increasingly overloaded with traffic—including large volumes of highly flammable energy products—many rail corridors face a long list of infrastructure upgrades to reliably and efficiently handle more passengers and goods over time.

Yet, despite the sudden spike in accidents, railroads are actually becoming much safer overall, building off a number of public and private efforts to boost infrastructure investment. This environment of overall safety increases coupled with more disruptive accidents should inform efforts to improve rail safety policy.

According to the latest Federal Railroad Administration data, freight trains continue to see a drop in overall accidents, particularly derailments. Last year, there were 1,202 freight derailments nationally, nearly half the total of 2004 (2,350). This decline, moreover, has come even as freight trains cover more miles, which are up almost 17 percent since they bottomed out during the recession in 2009. Still, the extent of damage from these derailments can vary widely, depending on the accident location and type of goods carried; this is especially true as the number of rail cars carrying hazardous materials, like Bakken oil, has risen over time. 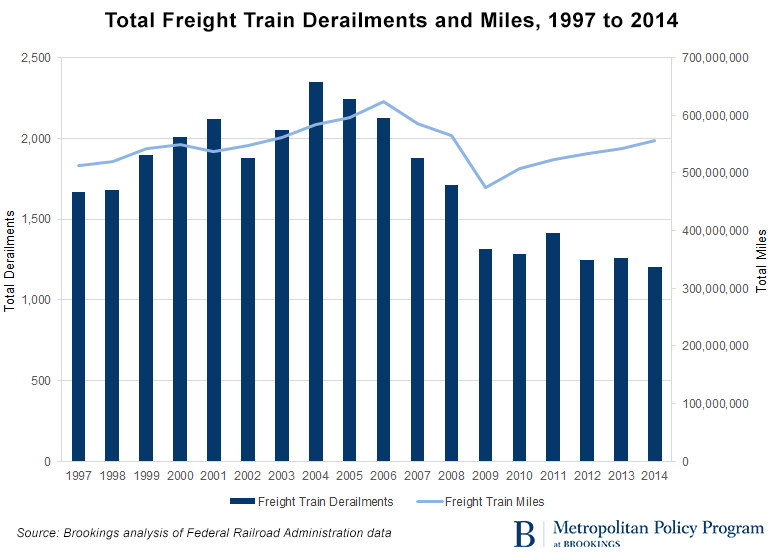 Passenger trains have seen a similar fall in derailments. Amid booming Amtrak ridership—including a 44 percent increase in passenger train miles since 1997—the number of derailments has steadily declined, down to 58 last year from a recent high of 113 in 2001. In addition, the severity of these and other related passenger train accidents, such as highway-rail incidents, has dipped over the past two decades. The rate of passenger injuries and accidents exceeding $100,000 in damage, for instance, have both fallen relative to the growing number of train miles covered. 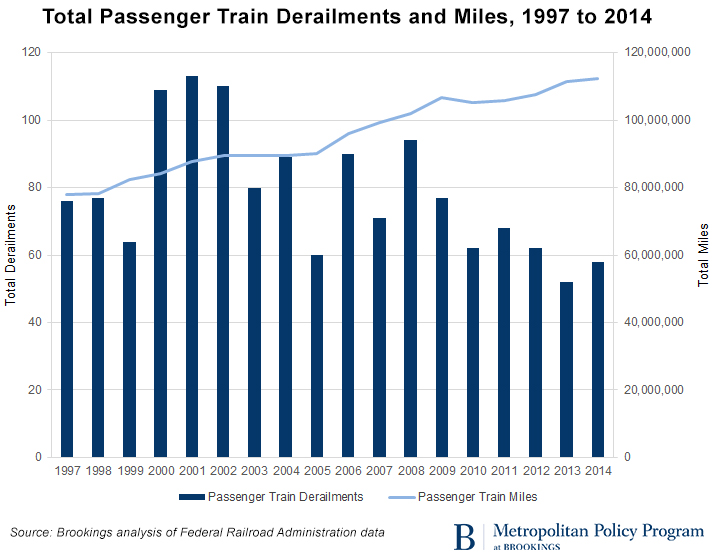 In turn, derailments across many individual states continue to nudge downward, speaking to the tremendous regional variety in goods movement, passenger ridership, and rail performance. For example, while Texas ranks among the largest states in total rail miles (10,469), carloads (3.1 million), and derailments (184) annually, these types of accidents have fallen by 20 percent since 2012 alone, due in part to various signal and track improvements. California, Ohio, and Louisiana, likewise, represent states with extensive rail infrastructure that have seen their derailments fall by nearly 10 percent or more over this same span.

Railroads have traditionally offered a safe way to carry passengers and goods compared to many other transportation modes, but ongoing infrastructure improvements will be crucial. Although private freight rail firms have already demonstrated how capital improvements can result in fewer derailments, policymakers at the national, state, and local level still have more work to do. This is especially important in dense urban areas that handle the rise in crude-by-rail shipments. Developing stronger plans, forming innovative partnerships, and implementing new technologies are among the range of strategies needed to drive further upgrades in years to come.