After a boom-and-bust decade, the return of consistent macroeconomic growth and low interests rates makes it a great time to invest in infrastructure. Larry Summers, one of infrastructure’s chief advocates, often focuses on the country’s shrinking investment rates. My colleague David Wessel built on those arguments by showing that federal infrastructure investment barely keeps up with long-term maintenance needs. But the story is different outside Washington, where state and local investment is far outpacing federal spending and generating positive net investment in U.S. infrastructure. 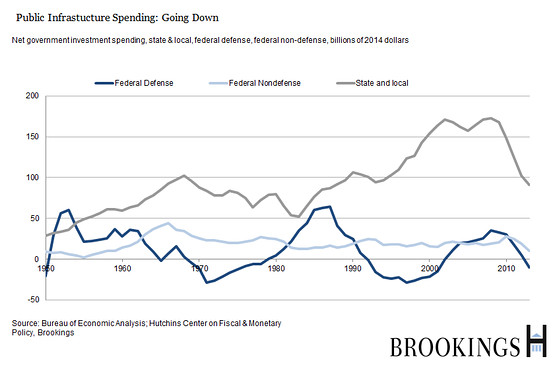 This is a consistent theme in U.S. federalism today. In an era of federal legislative disarray, state and local investment levels confirm that our federalist laboratory is still heathy. And nowhere is that more true than surface transportation policy.

For more than a decade, Congress has been unable to solve an obvious investment crisis related to highway and transit funding. The combination of an ever-expanding spending program and static driving levels means that gas tax revenues haven’t matched spending since 2000. That shortfall has eaten away at trust fund surpluses and has required six general fund infusions just to maintain authorized spending levels—with another likely by this May. Even as Republicans and Democrats call for greater transportation investment, no one can agree on how to pay for it.

By contrast, states have begun to pick up the funding slack. Since 2008—the year of the first general fund infusion—23 states have increased their gas taxes. The states cover every region and represent the full political spectrum from red to blue. At the time of this writing, an additional six states are actively debating gas tax increases either in the legislature or with their governors. All told, these 29 states represent over 55 percent of the U.S. population.

Localities and their citizens are also active infrastructure investors. Since 2008, 25 of the country’s 100 largest metro areas have passed at least one ballot measure to increase transportation funding, ranging from sprawling Atlanta to car-centric Los Angeles. This list doesn’t include other regions and metros like Charlotte, Denver, Honolulu, Phoenix, and Utah’s Wasatch Front that passed similar referenda prior to 2008 and continue to build new transit lines, bike lanes, and roadway improvements each year. 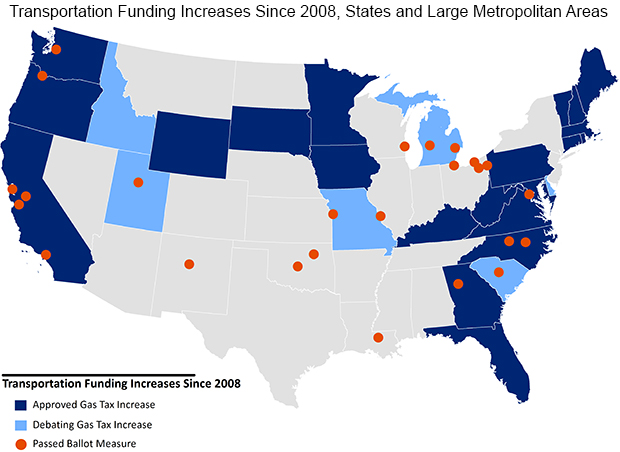 Note: Includes only ballot measures in the 100 most-populated metropolitan areas

Considering the gap between gridlock in Washington and local action, it’s time to start thinking about innovative ways for federal policies to boost transportation investment across the country.

First, federal policy people should provide more tools to help state and local partners. Leaders closer to home have the benefit of serving a public that knows exactly what it’s buying, and that familiarity facilitates building support for higher taxation or user fees. Using federal reforms to lower state and local borrowing costs—whether through loan programs like TIFIA or tax-exempt bonds like the administration’s QPIBs proposal—can help localities realize their transportation visions. Likewise, reforms to competitive grant programs like the New and Small Starts transit programs could reward places that invest in themselves.

Second, federal legislators should follow the lead of their state and local colleagues and figure out exactly where they want to invest. Considering the lack of political will to invest in national transportation infrastructure, simply asking for more money falls on deaf ears. National leadership should take a step back and consider why we invest in the first place. Whether it’s a freight program or the local innovation bill introduced by Sens. Cory Booker (D-N.J.) and Roger Wicker (R-Miss.), a more purposeful transportation program is a necessary step to building political consensus.

State and local efforts prove Americans still have the investment appetite. Policy frameworks need to catch up with this bottom-up federalist era.