Despite growing concerns about the ability of the United States to continue attracting high-quality foreign direct investment (FDI), it remains the largest recipient of FDI in the world. Our latest report noted that, while the United States cannot afford to rest on its laurels, a few megatrends—the shale gas revolution lowering energy prices, rising wages and slowing growth in emerging markets and U.S. advantages in advanced manufacturing processes—bode well for long-term U.S. competitiveness.

In this regard, state and local policymakers and economic development practitioners are rightfully grappling with the question: What does a smart strategy to attract, retain and maximize the economic development potential of high-quality FDI look like? After all, multinationals are expected to invest over $1.6 trillion outside their home countries in 2014 alone, a good chunk of that destined for U.S. market.

How does that work? High quality investors seek out the skilled workforce, quality infrastructure, robust supply chains and the innovative ferment associated with strong clusters, which themselves are usually found in metropolitan regions. In that sense, clusters signal to other companies in the same industry that a particular location is an advantageous one.

The role of clusters does not end there though. Strong clusters play a crucial role in ensuring that the spillovers from FDI are effectively absorbed by the host region. And especially in the case of foreign mergers and acquisitions, which constitute the bulk of FDI transactions, clusters provide a bulwark against any potential downsides by increasing the probability that a facility stays open and by ensuring that any dislocated employees can readily find jobs elsewhere.

In our report we found that strong clusters often drive patterns of investment, with FDI woven into the fabric of many of the country’s most competitive industry clusters. Whether it is finance in New York, IT in Silicon Valley, automobiles in Detroit or even filmmaking in Los Angeles, foreign companies are over-represented in many of the country’s most dynamic innovation ecosystems, making critical contributions of outside practices, new technologies and ideas. What is more, these investments are not driven primarily by incentives or abatements. Instead, they’re driven by the need for companies to maintain a presence in the places that invent their industries’ futures. 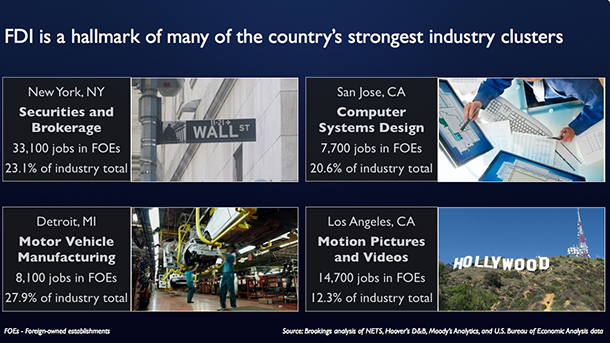 This suggests that a brand new thinking about FDI is in order. Instead of treating FDI attraction as an end in itself, policymakers and practitioners need to make strong industry clusters the bedrock of their FDI strategies. They need to start thinking of FDI as a means to strengthen their regional economies and industry clusters through infusions of new knowledge, technology and capital and heightened global engagement. The relationship between FDI and clusters is symbiotic and mutually reinforcing.  It is on that relationship where policymakers and practitioners should focus their efforts.

In short, there is really nothing foreign about a foreign direct investment strategy. Strategic FDI policy overlaps significantly with common sense economic development policies based on cultivating strong clusters that tend to the innovation ecosystem, workforce skills and the provision of strategic public goods such as infrastructure that benefit all local firms.

Which cities lead the nation for women founding venture-backed startups?