Software application developers earn large salaries in the United States, $96,260 a year on average. But in metropolitan San Jose they earn $131,270, the highest in the country. There are many partial explanations for this—local cost of living, differences in education levels, experience, and industry—but none of them quite account for it. It turns out that developers living in San Jose have acquired the specific skills most valued by employers.

As the map below shows, there is a huge amount of variation in earnings for software application developers across regional labor markets. In large metropolitan areas like New York, they earn $105,000, but in Louisville, they earn just $72,000. 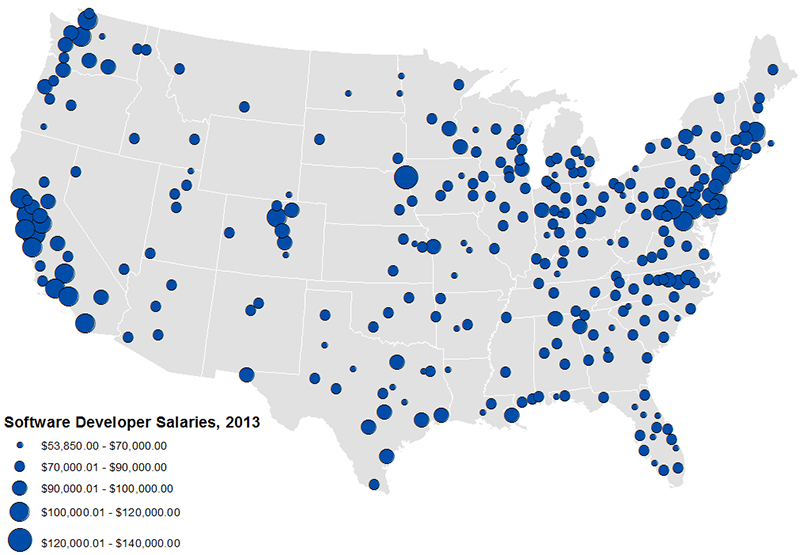 Similar patterns could be shown for other occupations, of course; for even within the same job title, people vary by education and experience, and regions vary by company and industry mix, productivity and export orientation, which all affect salaries and regional housing prices.

The surprising thing, when it comes to software developers and other skilled occupations too, is that none of these factors can fully account for the San Jose premium. Software developers in San Jose are typically slightly less experienced, and while their levels of education are higher—including their likelihood of having majored in engineering or computer science—the difference is not enough to explain their elevated earnings. Likewise, the cost of living in San Jose is remarkably high, but comparable to other major cities.

To figure this out, I analyzed a database of 29 million job vacancies advertised online during 2013 as compiled by the analytics firm Burning Glass. Of these, roughly 1.4 million were for software application developers, making it the most in-demand occupation. In total, 3 million ads also contained salary information, which I could use to estimate the average value of each distinct skill advertised.

In San Jose, the skills advertised for software developers are particularly valuable. The average vacancy requires higher value skills in San Jose than almost any other metropolitan area, even using national rather than local salary values.

For example, 8.4 percent of ads for software developers in San Jose requested Java, a widely used programming language, associated with an average salary of $98,000 across all U.S. ads mentioning both it and a salary requirement. Yet, for the United States as a whole, just 5.7 percent of software developer ads required Java. In New York City, the share was 6.7, and it was 4.7 in Louisville.

Other high-value programming languages and skills were disproportionately advertised in San Jose, such as Linux, C++, Python and the term “software engineering.”  These skills were much less commonly required for jobs in Louisville and even New York. Only 0.2 percent of software jobs required Python in Louisville and 1.7 in New York City, compared to 2.8 percent in San Jose. It is valued at $100,345.

These and other skills contribute to the high premium enjoyed by Silicon Valley computer workers, but they could be profitably learned by a much larger swath of people, as online educators like Treehouse, Udacity, and Code Fellows aim to demonstrate.