For all the debate and speculation that has surrounded the potential contribution of foreign direct investment (FDI) to national and regional economic development, two things have been in pretty short supply: data on where foreign companies locate their U.S. operations and insight on what that data reveals about the motivations and determinants of FDI.

Our new report, “FDI in U.S. Metro Areas,” addresses that gap with a first-of-its-kind analysis of the location of foreign-owned businesses and the U.S. workers they employ across the nation, with a focus on the 100 largest metro areas.

By analyzing the operations of majority-owned U.S. affiliates of foreign companies, the report finds that the country’s 100 largest metropolitan areas contain nearly three-quarters of the 5.6 million workers directly supported by FDI in the United States, compared to 68 percent of total private employment.

What is more, even while FDI supports 5.5 percent of private sector employment in the average large metro, it exhibits significant regional variation. This share runs from a high of over 13 percent in Bridgeport, CT to a low of about 1 percent in Provo, UT. 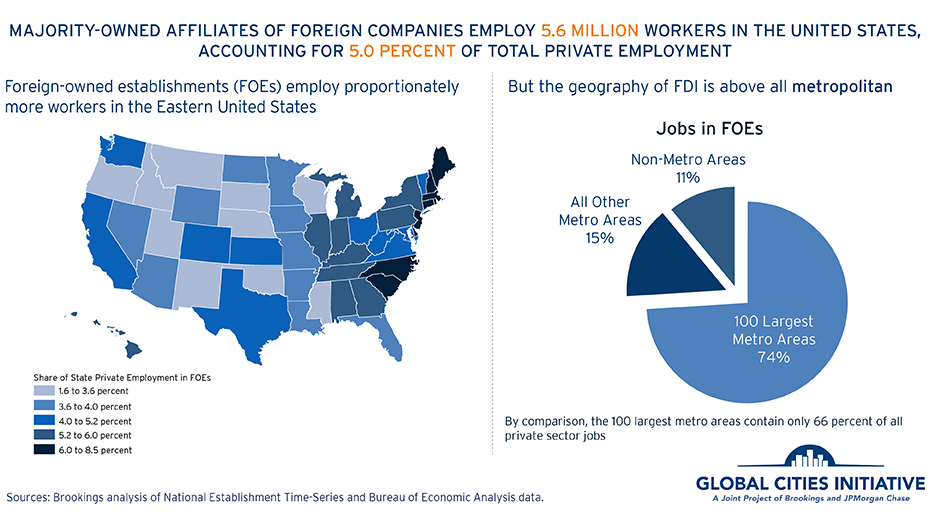 The report also finds that FDI employs workers in nearly every sector of the economy, but with concentration in a few sectors. FDI supports 2.2 million U.S. manufacturing jobs, representing nearly one-fifth of all manufacturing jobs in the country, and an impressive 1.4 million jobs in technology- and skills-intensive advanced industries, the prime movers of regional and national prosperity in developed countries.  In some industries such as motor vehicle parts manufacturing and basic chemical manufacturing, foreign-companies employ over half of all workers in the United States.

Contrary to popular perceptions, we find that mergers and acquisitions and not establishment openings (a.k.a. greenfield investment) drive changes in the number of jobs in foreign-owned businesses over time. This should not come as such a big surprise given that M&As constitute 87 percent of average annual dollar inflows into the United States. It does, however, have important implications for policymakers considering how to maximize the economic benefits of FDI in their regions.

Finally, FDI is a critical conduit connecting U.S. metro areas to a global network of trading partners and investors. Altogether, 115 different countries and 445 different global city-regions (our dataset enabled analysis below the foreign country level to look at the regional origins of FDI in the United States for the first time) invest directly in the United States with the average large metro receiving investment from 33 countries and 77 different foreign city-regions. Each linkage not only enables the flow of capital but builds business relationships and also infuses U.S. metro areas with new knowledge, technology, and ideas.

Why does all this matter?  As the nation’s metro areas continue the hard work of building more productive and sustainable economies, FDI can be a useful tool. In addition to capital that provides jobs, FDI also brings with it a host of ancillary economic benefits including higher wages, increases in trade, R&D spending, and productivity spillovers. In the coming days we will explore many of these issues to present a more complete picture of the potential impact of FDI on value and wealth creation in U.S. regions.

In the meantime, with this new data in hand, the nation’s regional leaders should have an improved understanding of what differentiates them in the global marketplace and be in a better position to harness FDI to advance their economic development.