2016 federal budget requests for research and development (R&D) efforts totaled nearly $146 billion, a six percent increase over the 2015 enacted levels. Defense efforts account for nearly half of the $146 billion. There is no set federal R&D budget. As noted in a Brookings paper titled The politics of federal R&D: A punctuated equilibrium analysis, “The budget process is decentralized and does not pit agencies against each other in a race for a bigger slice of the R&D pie; each agency requests an R&D level looking at its past, not contrasting its merits against other agencies.”

R&D is becoming increasingly interdisciplinary, yet it’s still helpful to look at which agencies requested the most funds. Table 1 lists the top seven agencies by requested 2016 R&D funding, as well as how their request compares to the enacted 2015 funding. The far right column shows the percentage of the total budget R&D efforts. All values given do not account for inflation. All of these agencies increased their requests over what they received in 2015.

The R&D budgets include funding for basic and applied research, development efforts, facilities, and equipment. Basic research is conducted to better understand our world; its end goal is knowledge, not necessarily practical relevance. As an early advocate for governmental support of science, Vannevar Bush noted, “Statistically it is certain that important and highly useful discoveries will result from some fraction of the undertakings in basic science; but the results of any one particular investigation cannot be predicted with accuracy.” This has proven true time and time again, which is why basic research accounts for nearly a quarter of the 2016 proposed budget.

Applied research attempts to solve a specific problem, and it also accounts for nearly a quarter of 2016 proposed R&D funds. Development uses the knowledge gained from both types of research to produce useful materials, devices, systems, or methods; it consumes the remaining half of the proposed 2016 R&D budget. The exact percentages and amounts are given in Table 2.

Although the research and development budgets each respectively account for approximately 50% of the total R&D budget requests, the breakdown of R&D spending varies significantly within the different agencies. This is represented in Tables 3 and 4 below. 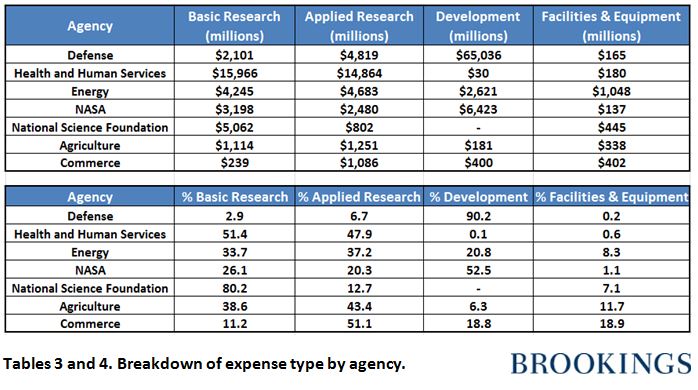 President Obama recognizes that R&D efforts are vitally important to the future of the United States and “is committed to making investments in R&D that will grow our economy, sustain our competitive advantage in the global economy, and enable America to remain the world leader in innovation.” We’ll highlight some of these exciting R&D efforts in a future post, so stay tuned.

More on The Federal Budget

The benefits and costs of broadband expansion