Federal departments and agencies received just above $133 billion in R&D funds in 2013. To put that figure in perspective, World Bank data for 2013 shows that, 130 countries had a GDP below that level; U.S. R&D is larger than the entire economy of 60 percent of all countries in the world.

The chart below shows how those funds are allocated among the most important federal departments and agencies in terms of R&D. 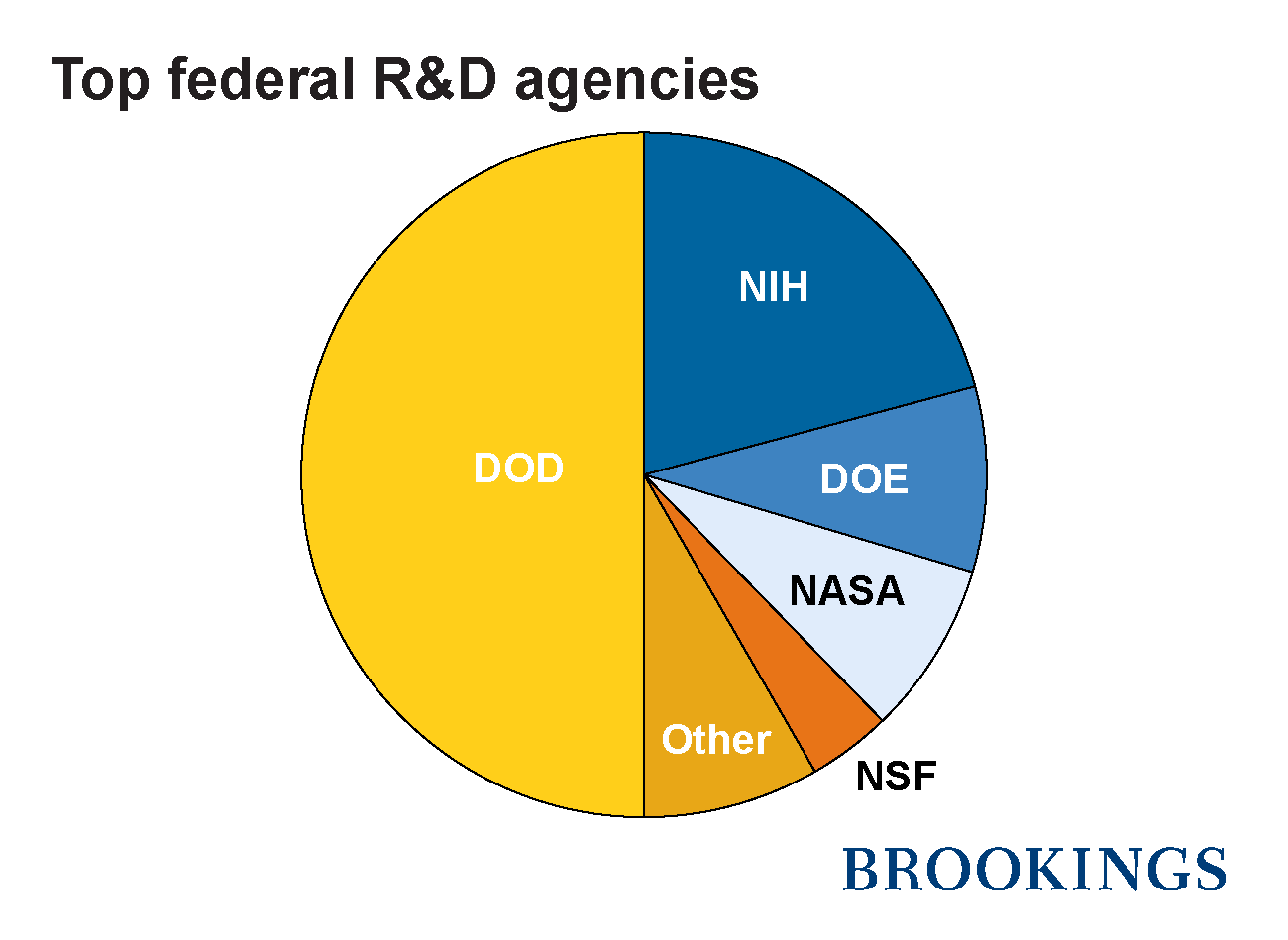 Those looking at these figures for the first time may be surprised to see that the Department of Defense takes about half of the pie. It should be noted however that not all federal R&D is destined to preserve U.S. military preeminence in the world. From non-defense research, 42 percent is destined to the much-needed research conducted by the National Institutes of Health, 17 percent to the research of the Department of Energy—owner of 17 celebrated national laboratories—16 percent for space exploration, and 8 percent for understanding the natural and social worlds at a fundamental level. The balance category is only lumped together for visual display not for its importance; it includes for instance the significant work of the National Oceanic and Atmospheric Administration and the National Institute of Standards and Technology.

Despite the impressive size of defense R&D, we hear little about it. While much of defense research and development is classified, in time, civilian applications find their way into mainstream commercial uses—the Internet and GPS emerged from research done at DARPA. Far more visible than defense R&D is biomedical research, clean energy research, or news about truly impressive discoveries either in distant galaxies or in the depths of our oceans.

What produces this asymmetry of visibility of federal R&D work?

In a recent Brookings paper, a colleague and I suggest that the answer lies in the prominence of R&D in the agencies’ accounting books. In short: How visible is R&D and how much the agency seeks to discuss it in public fora depends not on the relative importance, but on how large a portion of the agency’s budget is dedicated to R&D.

From a budget perspective, we identified two types of agencies performing R&D: those agencies whose main mission is to perform research and development, and those agencies that perform many functions in addition to R&D. For the former, the share of R&D in the discretionary budget is consistently high, while for the latter group, R&D is only a small part of their total budget (see the chart below). This distinction influences how agencies will argue for their R&D money, because they will make their case on the most important uses of their budget. If agencies have a low R&D share, they will keep it mixed with other functions and programs; for instance, research efforts will be justified only as supporting the main agency mission. In turn, agencies with a high R&D share must argue for their budgets highlighting the social outcomes of their work. These include three agencies whose primary mission is research (NASA, NSF, NIH), and a fourth (DoE) where research is a significant element of its mission. 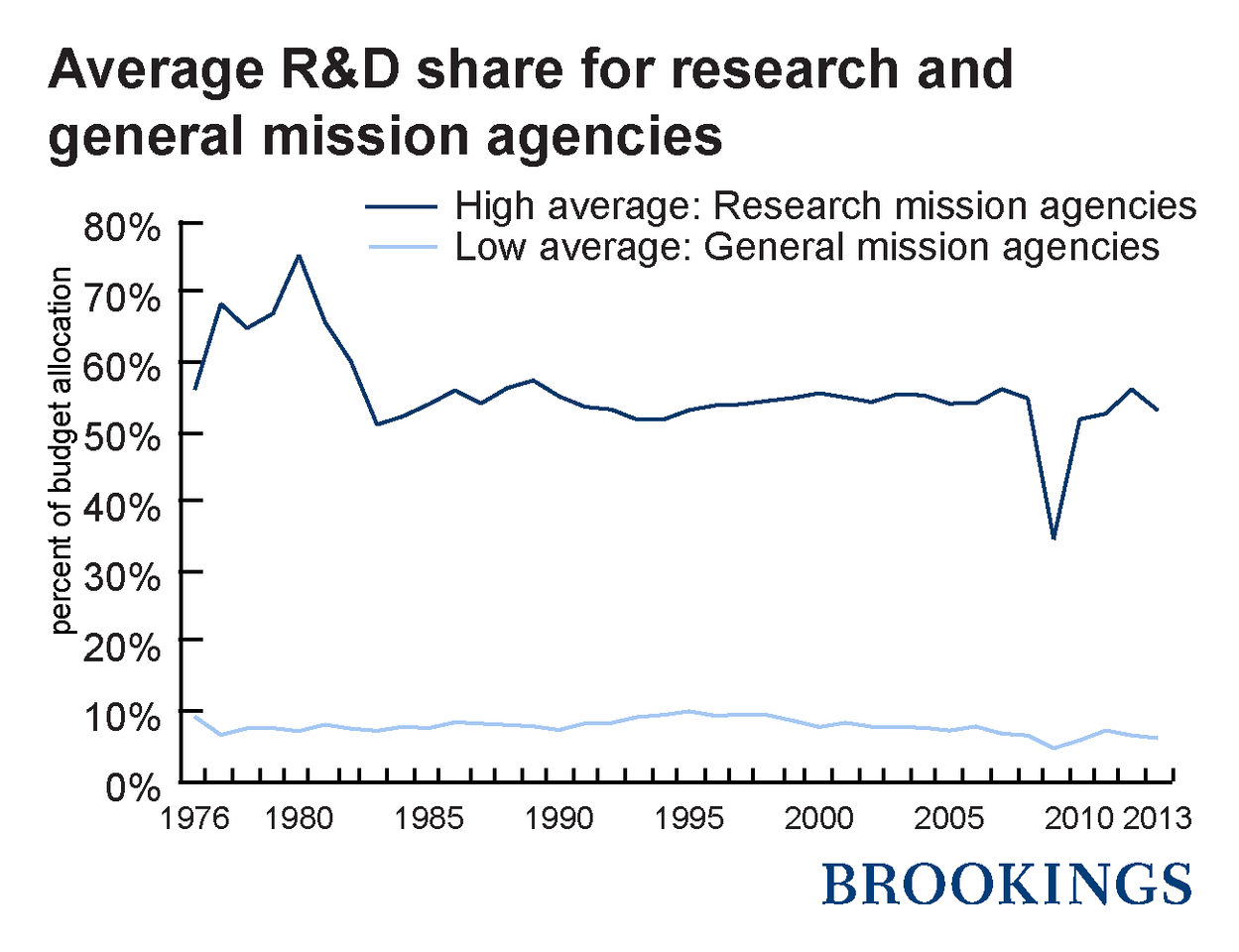 There is little question that the four agencies with high R&D share produce greatly beneficial research for society. Their strategy of promoting their work publicly is not only smart budget politics but also civic and pedagogical in the sense of helping taxpayers understand that their tax dollars are well-spent. However, it is interesting to observe that other agencies may be producing research of equal social impact that flies under the public radar, mainly because those agencies prefer as a matter of good budget policy to keep a low profile for their R&D work.

One interesting conclusion for institutional design from this analysis is that promoting a research agency to the level of departments of government or its director to a cabinet rank position may bring prominence to its research, not because more and better research will necessarily get done but simply because that agency will seek public recognition for their work in order to justify its budget. Likewise, placing a research agency within a larger department may help conceal and protect their R&D funding; the politics of the department will focus on its main goals and R&D would recede to a concern of secondary interest in political battles.

In the Politics of Federal R&D we discuss in more detail the changing politics of budget and how R&D agencies can respond. The general strategies of concealment and self-promotion are likely to become more important for agencies to protect a steady growth of their research and development budgets.

Data sources: R&D data from the American Association for the Advancement of Sciences

. Total non-discretionary spending by federal agency from the

Office of Management and Budget