Reddit’s Aprils Fools prank turned unintended social experiment is now over. As we have written in the past Reddit originally created the button as a joke. The subreddit consisted of a timer counting down from 60 seconds and a button. Press the button and earn a colored badge for your account that corresponded to how much time was left remaining. Just over one million people clicked the button and the last press was on June 5th 5:37 EDT. It’s easy to ridicule the button as unsubstantial Internet fluff, but that would obscure a couple of interesting lessons about how people interact with the Internet.

The button experiment instructs us how to use the Internet in the public sector. Richard Thaler and Cass Sunstein developed the term Libertarian Paternalism to describe an approach to policy where it is possible to influence the decisions of people for their own benefit without unnecessary restrictions on that individual’s freedom. The button was a simple game with a few rules. Redditors invested time and resources into that game with fantastic results. It’s possible to develop Internet platforms where people choose freely to participate in game that has broad reaching benefits for the public. This could include securing the border or promoting conservation efforts. The button teaches us that the design of the platform matters. The nature of the button encouraged over a million people to participate in a prank. Imagine if the button were designed to promote a public good.

Tribalism and the button

The button subreddit ended up dividing users into multiple tribes based on their views of the experiment. The clearest cleavage was between those who wanted to press the button and those who did not. The “Grey Hopeful” believed they would receive a prize if they watched the button expire. Another group of non-button pressers called the “Followers of the Shade” believe that clicking was sinful. The “Knights of the Button” took up the charge of ensuring that someone was always able to click it. It’s difficult to track the creation and the development of these dynamic groups. The narratives they developed are complex and some lend themselves to comparisons with actual religions. 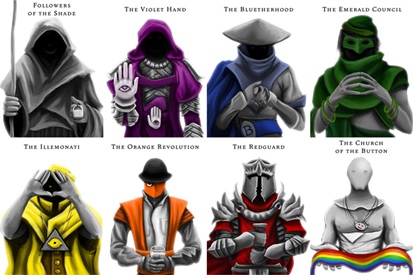 In retrospect the timer was always going to run out. Redditors (Reddit users) who created an account prior to the creation of the sub reddit could press the button once. This meant that eventually no users would be eligible to click the button. Even so, pre-April Fools redditors number in the hundreds of millions and it was conceivable that users could find a way to keep the button alive for months if not years. The “knights of the button” created an automated program that relied on donated accounts. This effort failed when the bot attempted to use an account that was ineligible because it had already pressed the button. Though the button ended unceremoniously the experiment is far from a failure.

Can we better define what we mean by closing the digital divide?

TechTank Podcast Episode 35: What to expect from Biden’s 2022 tech agenda