The mobile economy in China and India has grown by leaps and bounds over the past decade. Mobile technology has the potential to shrink the broadband gap, improve financial inclusion, and support humanitarian efforts. A recent report from the Boston Consulting Group adds another interesting perspective into the existing conversation about the impact of mobile technologies. India appears poised to eschew building up its fixed broadband infrastructure and jump directly to mobile. Small and medium-sized enterprises (SMEs) in India appeared poised to take advantage of this amazing change. 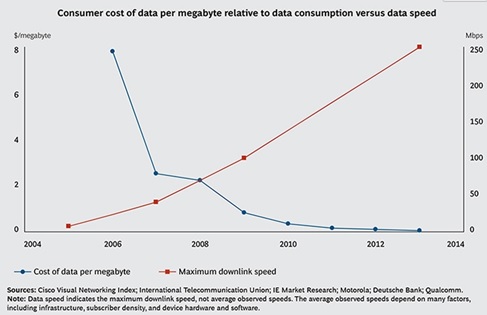 Maximum download speeds have risen greatly when comparing second generation networks with current fourth generation technology. 2G networks were capable of reaching 20 kilobits per second and 4G technologies can reach 250 megabits per second, which is about 12,000 times faster. At the same time the actual cost of network infrastructure per megabyte is falling dramatically: a 95 percent decrease from 2G to 3G and 67 percent decrease from 3G to 4G. Subsequently, the consumer cost of data per megabyte decreased sharply. From 2005 to 2013, the average cost of a mobile subscription relative to the maximum data speed dropped about 40 percent each year or 99 percent in an 8 year period. Higher speeds and lower costs make mobile a viable development platform for SMEs. In America this had led to the growth of the app economy. In India this effect is even more pronounced.

Widespread use of mobile technologies fuels the leap 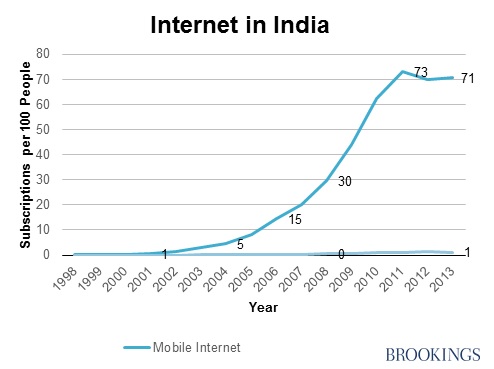 For the average Indian, mobile is the only point-of-entry to the Internet. Mobile devices are much more common than computers. The PC penetration rate in India of 5 percent stands in stark contrast to the 75 percent rate for mobile devices. Rates of fixed broadband Internet usage increased at a snails pace in India and at the same time mobile cellular subscriptions soared. More and more people in India are choosing to access Internet solely through mobile devices. Currently about 34 percent of people in India access the Internet exclusively from mobile devices. Flipkart an Indian e-commerce company predicts that 75 to 80 percent of their customer’s traffic will come on mobile platforms. The proliferation of mobile technologies in India provides incentives for SMEs to focus on developing mobile oriented business models.

SMEs in India place a greater emphasis on mobile platforms compared to companies in other countries. About 25 to 35 percent of surveyed SMEs in India are identified as mobile leaders, firms that use mobile productivity tools, operational tools (real-time job tracking or mobile data analytics) and sales and marketing tools. In developed countries such as Germany, only 14 percent of the surveyed SMEs are mobile leaders. Further, mobile oriented SMEs are thriving in India in a variety of fields. India’s largest E-commerce marketplace Flipkart Sidesteps has seen its traffic grow twice as face on mobile when compared with PC. Anti-violence apps such as FightBack and mobile health initiatives such as Swasthya Samvedana Sena are also experiencing great success.

India is in the midst of a mobile revolution that is categorically different than other parts of the world. Without existing complex legacy systems, businesses in India are now in the unique position to leapfrog terrestrial Internet technologies and reap the full benefits of a truly mobile economy.