FINsix, a startup based in Menlo Park, Calif., offers consumers something unique: a 65-watt multi-use charger that is four times smaller and six times lighter than the average power brick. But FINsix’s flagship product is not the only thing that differentiates this company among its technology market competitors. FINsix’s CEO and co-founder is a woman entrepreneur in STEM. Vanessa Green holds a master’s degree in engineering from MIT, which already places her among select company. Leaping a giant step further, the intersection of Green’s gender, academic training, and entrepreneurship leaves her in an exceptionally small (but hopefully soon to be growing) class of entrepreneurs.

A recent report released by the Small Business Administration’s Office of Advocacy highlights the need for more Vanessa Greens. Understanding the Gender Gap in STEM Fields EntrepreneurshipI, by Margaret E. Blume-Kohout, analyzes data from doctoral recipients in STEM fields and identifies several tipping points to entrepreneurship among women in STEM.

Results from the 2010 Survey of Doctorate Recipients underscore the gender gap in STEM entrepreneurship and patenting, with women STEM PhDs engaging in both activities at lower rates (5.4 percent versus 7 percent, and 15 percent versus 28 percent, respectively). 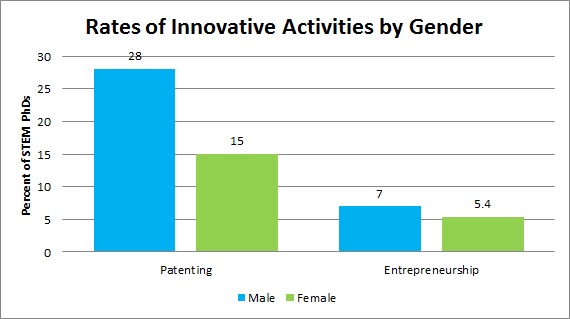 Underlying these numbers are gender-based enrollment disparities in the most entrepreneurial of STEM fields. 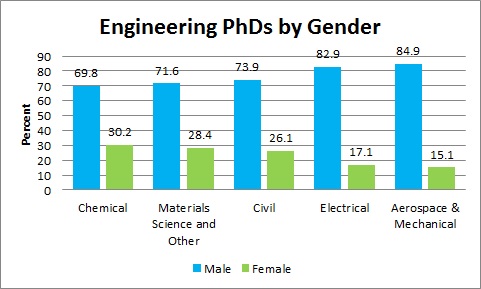 What Matters to Women STEM PhDs?

The report found three areas that matter to women and affect their participation and success in STEM PhD programs.

In addition, industry-funded R&D and experience in postdoctoral positions increase the likelihood of STEM entrepreneurship for STEM PhD women, while volume of R&D matters for STEM PhD men. Female STEM PhDs who attend programs at universities with relatively higher patenting volume and higher shares of R&D funded by industry or other non-federal sources are significantly more likely to participate in patenting and entrepreneurship. In addition, female STEM PhDs whose first postdoctoral employment was in (or funded by) industry are equally likely as men to participate in patenting and entrepreneurship.

Christine Kymn is chief economist and director of economic research at the U.S. Small Business Administration’s Office of Advocacy. The office produces and contracts research on small business issues, policy and trends to advise federal policymakers. Dr. Kymn has been a policy analyst for the Office of Management and Budget, and a professor at George Mason University School of Law and Washington & Lee University.

Women and men in STEM fields report different preferences for health insurance, independence, and parental responsibilities. The report finds that the arrival of young children at home significantly and substantially decreases women’s near-term patenting and entrepreneurship, with no similar effect for men. This finding could have implications for on and off boarding of women in STEM fields and merits further exploration.

These straightforward findings suggest that simple approaches like increased faculty mentorship and greater industry funding for R&D or postdocs could support the nascent growth in the number of women STEM entrepreneurs. Hopefully in the future company’s like FINsix will differentiate themselves only because of the quality of their products and not the gender of their management.

Women and e-commerce in Africa: The $15 billion opportunity