The Internet has generated huge economic gains for people all over the world. But some urban communities have not seen an equal share of the benefits. Chicago’s Smart Cities program aimed to help close the digital divide. An evaluation of the program offers unique evidence of neighborhood level change, following investment from the Broadband Technology Opportunities Program (BTOP) that was part of the federal stimulus. The research shows that neighborhoods participating in this digital literacy and outreach program experienced increased rates of Internet use, broadband adoption, and online activities, including job search. Chicago is the only U.S. city to have neighborhood-level data over time and offers a nationally significant view of the effects of a BTOP initiative, especially in an urban area.

Tracking changes in Internet use at the community level represents an innovative approach to the evaluation of digital inclusion programs that has implications for public policy. Many of these efforts seek to bring about change for communities, as well as for individual participants. Widespread Internet use promises increased resources for employment and economic development, education, public health, crime prevention, access to public transportation and government services, civic engagement and many policy areas that affect the quality of life in communities.

Through a Sustainable Broadband Adoption grant to the City of Chicago, the Local Initiatives Support Corporation and community-based organizations provided training and outreach in nine of Chicago’s community areas. The low- and moderate-income communities involved in the program were predominantly African-American and Latino neighborhoods on Chicago’s south and west sides that had low rates of broadband use and activities online; including neighborhoods where only 38 percent of residents had broadband in comparison to 61 percent of the city overall in 2008.

The Smart Communities featured a variety of programs addressing Internet skills – training for residents, classes for community organizations, technical assistance and training for businesses, and digital media programs for youth. Outreach was carried out through neighborhood portals, ad campaigns featuring the photos and stories of participants, and the use of “tech organizers” to spread the word. The goal was to build a culture of digital excellence in the participating communities.

The results of the Smart Communities evaluation show that from 2008-2013, the target communities experienced a greater rate of growth in Internet use, home broadband adoption, and several activities online (including online job search), compared to similarly-situated Chicago community areas, controlling for other demographic changes across neighborhoods. The differences were substantively large (between 9-12 percentage points) as well as statistically significant. 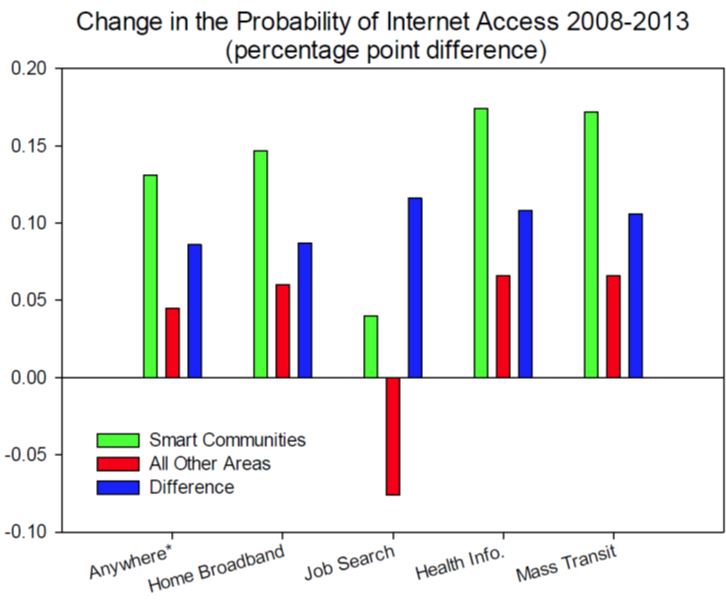 Although neighborhood-level analysis cannot point with certainty to the Smart Communities program as the source of the changes over time, the differences are unlikely to have occurred by random chance and the study rules out many other explanations. It controls for demographic change – for the possibility that the change that we see is due to higher-income or younger residents moving in, for example. By controlling for the characteristics of neighborhoods, it eliminates the potential explanation that all of the lower-income neighborhoods are simply “catching up” over time, with or without the program intervention. While this is an aggregate level analysis, it is based on individual level data, with repeated measures over time, controlling for other factors. As a result, we can be reasonably confident that the treatment, in this case, Smart Communities program, was associated with higher rates of change in Internet access and use.

The analysis of neighborhood-level change was also part of a multi-method evaluation. This included follow-up telephone surveys with participants in the FamilyNet training program for residents and the Civic 2.0 program for neighborhood organizations, as well as interviews.

Although the Smart Communities program provided training rather than discounted broadband, we find empirical evidence over time of higher rates of home broadband access as well as activities online, consistent with the federal goal of broadband adoption and the local goals for a culture of “digital excellence” across the participating neighborhoods. Increases in Internet use, broadband adoption, and activities online offer new resources for the Smart Communities and their residents through greater access to information, communication networks, services, and participation online.

Measuring Change in Internet Use and Broadband Adoption: Comparing BTOP Smart Communities and Other Chicago Neighborhoods

Nicol Turner Lee and Samantha Lai
Tuesday, May 17, 2022
Get daily updates from Brookings