The initial purpose of robots was to alleviate unnecessary and tedious burdens on people through automation. However, recent innovations in robotics have focused on a different purpose; how people and robots can work better together. Robot designers now work to empower humans rather than replace them. An important factor to consider is the differences in the view of robots across cultures. In Heather Knight’s new paper on the subject, she draws on the differences in the perception of robots between Western culture and Japan. In the West, there is a cultural aversion to robots, exacerbated by fictional characters like Skynet or HAL. However, in Japanese culture robots receive friendly portrayals and are represented in a much more positive light than the Western robotic villains.

Knight draws on the concept of the “Uncanny Valley”, which designers often reference when creating new robotic technologies. The theory states that as the appearance of a robot approaches that identical to a healthy human there is a dip or uncanny valley where the design causes feelings of revulsion in most views. The graph below illustrates this theory, highlighting corpses, zombies, and prosthetics body parts as examples that could fit into the uncanny valley. The valley is a significant barrier that has yet to be crossed in robotic design. 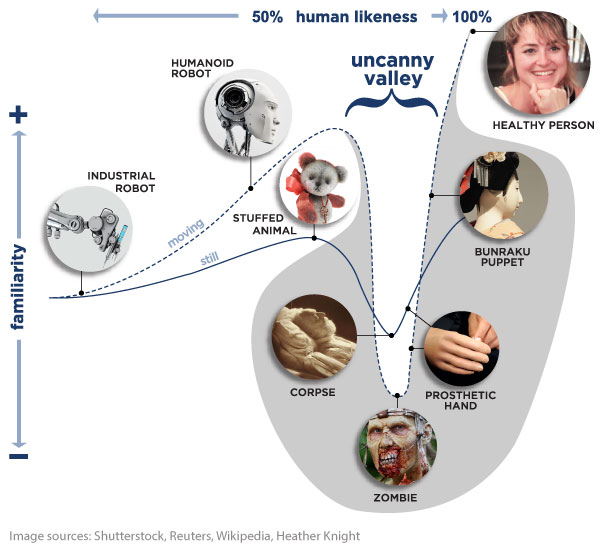 Knight offers a framework for human-robot partnerships that includes three categories that have “short-term industrial or consumer applications”: Telepresence Robots, Collaborative Robots, and Autonomous Vehicles. Telepresence Robots provide the user the ability to have sensing capabilities and a physical presence in difficult to traverse environments. The Collaborative Robots, or “Everyday Robots”, are those that interact directly with humans and are integrated into daily life. These are the robots that warrant extensive social and cultural considerations in their design. Lastly, Autonomous Vehicles are machines like cars where a computer could take control over operations (e.g. Google’s driverless cars).

According to Knight, the success of the next generation of robotics will depend on a combination of “pro-active policy-making and informed, ethical design”. There is seemingly limitless potential in human-robot partnerships. Policymakers can maximize the societal impact through a better understanding of design considerations, especially in collaborative robots. In doing so, they could create a regulatory environment that allows for thoughtful and impactful innovation in collaborative robotics.