On March 4, President Obama submitted to Congress his 2015 budget request. Keeping with the spending cap deal agreed last December with Congress, the level of federal R&D will remain flat; and, when discounted by inflation, it is slightly lower. The requested R&D amount for 2015 is $135.4 billion, only $1.7 billion greater than 2014. If we discount from this 1.2% increase the expected inflation of 1.7% we are confronting a 0.5% decline in real terms.

Reaction of the Research Community

The litany of complaints has started. The President’s Science and Technology Advisor, John Holdren said to AAAS: “This budget required a lot of tough choices. All of us would have preferred more.” The Association of American Universities, representing 60 top research universities, put out a statement declaring that this budget does “disappointingly little to close the nation’s innovation deficit,” so defined by the gap between the appropriate level of R&D investment and current spending.

What’s more, compared to 2014, the budget request has kept funding for scientific research roughly even but it has reallocated about $250 million from basic to applied research (see Table 1). Advocates of science have voiced their discontent. Take for instance the Federation of American Societies for Experimental Biology that has called the request a “disappointment to the research community” because the President’s budget came $2.5 billion short of their recommendations.

The President’s Research and Development Budget 2015 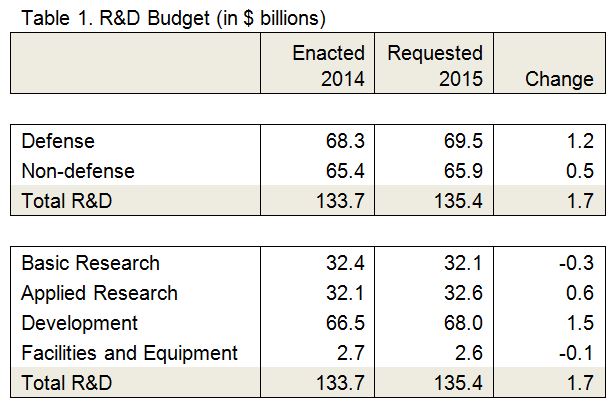 These complaints are fully expected and even justified: each interest group must defend their share of tax-revenues. Sadly, in times of austerity, these protestations are toothless. If they were to have any traction in claiming a bigger piece of the federal discretionary pie, advocates would have to make a comparative case showing what budget lines must go down to make room for more R&D. But that line of argumentation could mean suicide for the scientific community because it would throw it into direct political contest with other interests and such contests are rarely decided by the merits of the cause but by the relative political power of interest groups. The science lobby is better off issuing innocuous hortatory pronouncements rather than picking up political fights that it cannot win.

Thus, the R&D slice is to remain pegged to the size of the total budget, which is not expected to grow, in the coming years, more than bonsai. The political accident of budget constraints is bound to change the scientific enterprise from within, not only in terms of the articulation of merits—which means more precise and compelling explanations for the relative importance of disciplines and programs—but also in terms of a shrewd political contest among science factions.