Across the globe, numerous countries share the goal of improving the efficiency of healthcare systems.  Mobile technologies can help directly address some of the most stubborn healthcare problems including exploding costs, providing care to seniors, access in impoverished areas, and the treatment of deadly disease.

Countries around the world use mHealth to help transform various aspects of their healthcare systems.  The figure below includes data from the World Health Organization on mHealth initiatives.  Thirty eight percent of countries who participated reporting using call centers.  A sizable numbers of countries described the use of reminders, telemedicine, records, and treatment in healthcare. 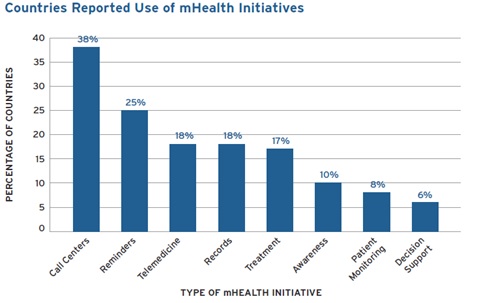 Researchers at GSMA estimate the size of the global mHealth market will be five times larger in 2017 than in 2013.  The largest market in 2013 is projected to be United States followed by China.  Together they will occupy about one third of the market with United States accounting for about one quarter of projected revenue.  The other BRIC countries besides China will also likely see large growth in the field of mHealth. 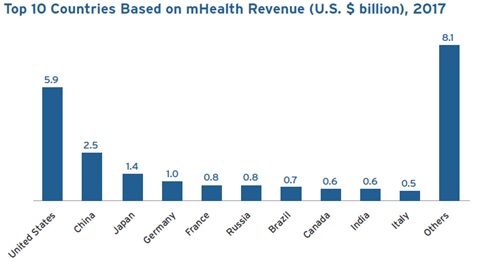 The growth of mHealth is expected to explode in the next few years in China.  The firm iiMedia predicts that the mHealth market will grow more than 50% each year in 2016 and 2017.  In particular the market for wearable mobile medical equipment is expected to double in size between 2011 and 2017.

Interested in learning more about the future of mHealth?  Read the paper co-authored by scholars by the China Academy of Telecommunication Research and the Center for Technology Innovation entitled “mHealth in China and the United States: How Mobile Technology is Transforming Health in the World’s Two Largest Economies.”