The BBC is doing something I think is awesome but many of my American friends think is awful: gathering information of the social class background of their recruits. The move is part of an aggressive strategy to promote more diversity both on the airwaves and behind the scenes at the public service broadcaster. The civil service has been moving in the same direction.

1. Can you measure social class?

Race and gender are relatively straightforward characteristics, notwithstanding the recent nonsense over restrooms for transgender people. Defining social class is a much more complex business. Many variables could be included, including occupational status, income or wealth, as well as education or cultural capital.

But the goal here is simply to find a measure that is good enough for the purposes at hand. The BBC asks whether either of your parents has a college degree. This is not a bad approach. Education is an important dimension of social class in itself, and strongly related to others. The BBC is also going to ask whether at any point in childhood the person in question was eligible for free school meals. (The questions are voluntary.)

Such proxy measures are narrow measures of class. But they are better than the current ones, since there are none.

Diversity can benefit organizations by widening the range of viewpoints and perspectives. A mixed team is a better team. Class background may be as important here as other factors.

Take two people of a different race or gender, each raised by wealthy East Coast parents, attending a top-drawer private high school, and graduating from an Ivy League college. They may not be as different from each other as they are from a white man raised by a poor single mother in a small Appalachian town.

The BBC is historically an upper middle class institution: “BBC English” meant a posh accent. The British professions in general have in fact tended to draw from a narrow pool of talent pool. Around 7 percent of students attend private high schools (or “public schools”, in British). But they are strongly over-represented in the top professions, including journalism: 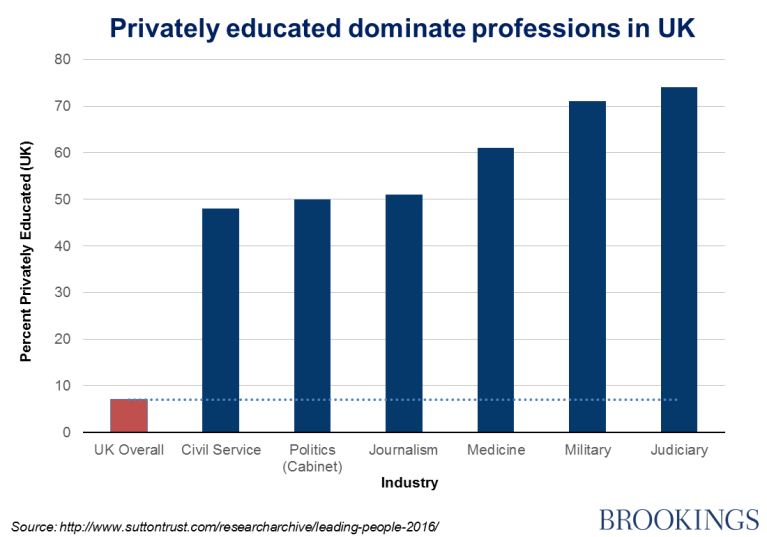 From a broader societal perspective, the persistence of class inequality is of course bad news for upward social mobility.

3. What can be done about class diversity by organizations anyway?

Simply raising awareness of a potential class bias in hiring and promotions could be valuable. Reforming institutional practices—for example the allocation of internship opportunities—may also help. Broadening the search for talent beyond the marquee brands of higher education is likely to diversify the class background of recruits; the BBC is also moving to both name-blind and institution-blind applications. At the same time, greater support for less traditional hires may help them to succeed.

Time to get class conscious

The U.S. sees itself as a classless society, one reason Americans recoil against monitoring social class. It is an understandable instinct. But the perpetuation of class status is now at least as big a problem in the U.S. as in the UK. Even as white privilege and male privilege have diminished, class privilege has survived. A little more class-consciousness might not hurt.