Ron Haskins and Isabel Sawhill were just awarded the 2016 Daniel Patrick Moynihan Prize by the American Academy of Political and Social Science. The honor is presented to “a leading policymaker, social scientist, or public intellectual whose career demonstrates the value of using social science evidence to advance the public good.” In this case, however, for the first time the award was awarded jointly.

Here at Brookings, Belle and Ron have forged a powerful and unique intellectual partnership, founding and elevating the Center on Children and Families and producing world-class work on families, poverty, opportunity, evidence, parenting, work and education, and much more besides.

The Association highlighted Belle and Ron’s bipartisanship. This was appropriate, given that the two have different political backgrounds, and work with people across the political spectrum. The skills and attributes they display in order to work in this way are:

These attributes, when you think about it, are those every decent scholar should aspire to. Belle and Ron have shown us that the skills for bipartisanship turn out to be essentially the same skills as those required for good scholarship.

In his remarks at the Prize lecture, Ron focused on the rise, importance, and prospects for evidence-based policy. Ron has tackled this subject at book length in Show Me the Evidence. Here is part of what Ron had to say:

“Perhaps the most important social function of social science is to find and test programs that will reduce the nation’s social problems. The exploding movement of evidence-based policy and the many roots the movement is now planting, offer the best chance of fulfilling this vital mission of social science, of achieving, in other words, exactly the outcomes Moynihan had hoped for. Today, evidence-based policy rests on the mighty oak of program evaluation in general and the random assignment study in particular.”

Ron highlighted the growth of Pay for Success programs, the Obama administration’s emphasis on evidence-based initiatives, and the creation of the Ryan/Murray Commission on Evidence-Based Policy.

Ron argued that it was right to be skeptical about the likely impact of any particular intervention. But this is not to say that policy doesn’t work—just that some policies work, others don’t, and it good to know the difference. In his slides, Ron lists some programs that have been shown to have demonstrable, sustainable impact—what he described as “his entry in the evidence-based policy sweepstakes.”

But there are plenty of challenges ahead, including the need to improve our understanding of implementation; and the following critical question: “When a program fails, what’s next?” Ron argued that the answer should not be to simply pull the funding, but to work on improving performance.

Better contraception for a fair society: Evidence-based policy in action

Belle highlighted the work captured in her latest book, Generation Unbound, on how to reduce the damaging rise of unintended pregnancies and births in the U.S. Over 40 percent of children are born outside of marriage, and 60 percent of births to single women under age 30 are unplanned. In the spirit of being faithful to the facts, and focused on what works, Belle showed the costs of unintended pregnancies for poverty, family stability, and opportunity. Child poverty rates have increased, Belle estimates, by about 25 percent since 1970 because of changes in family structure.

So what are the solutions? In the spirit of following the evidence, Belle argued that the goal must be to help people plan for rather than drift into pregnancy, by broadening access to and use of long-acting reversible contraception. The best example is the intrauterine device, or IUD. The risks of pregnancy for women using this method of contraception are very much lower than for condoms or the pill: 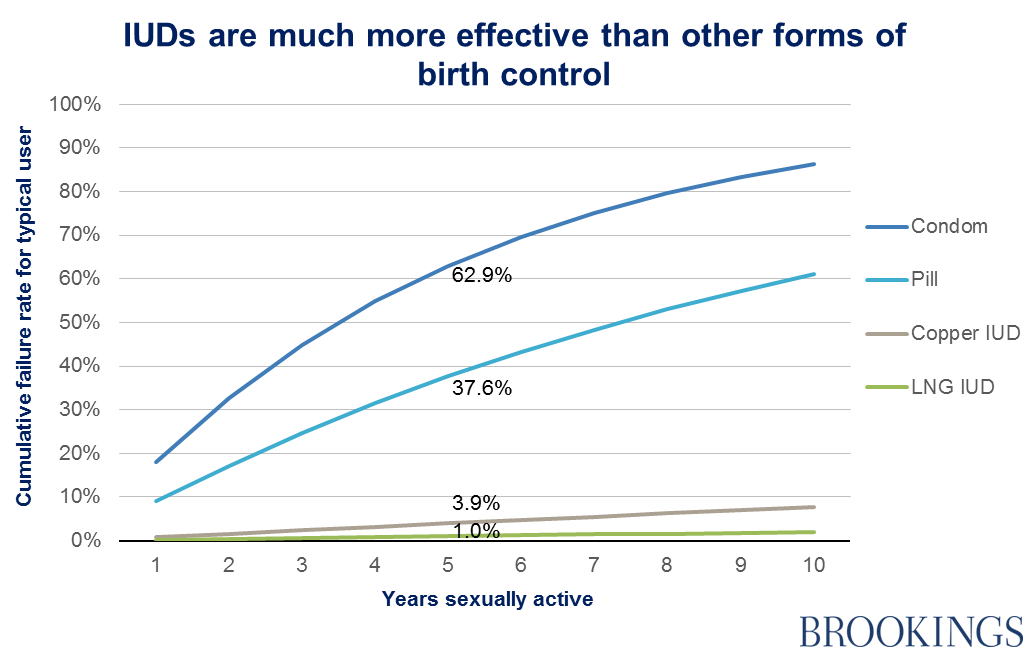 A fact-based analysis of a problem, followed by an evidence-based approach to solutions: Belle’s work on contraception (sometimes alongside Ron) is a perfect example of bipartisanship, impact-oriented scholarship and a commitment to evidence.