The resignation of a British Cabinet Minister did not reach the top of U.S. news bulletins last week. But the angry departure of welfare secretary Iain Duncan Smith from David Cameron’s government has lessons for conservatives interested in fighting poverty, Paul Ryan included.

Duncan Smith had been reforming the UK’s safety net for working-age families since 2010, replacing a myriad of means-tested benefits with a Universal Credit (UC), designed to increase work incentives without extra costs. But the Chancellor, George Osborne, is determined to cut those benefits, and is banking instead on economic growth and a higher minimum wage.

“There has been too much emphasis on money saving exercises and not enough awareness from the Treasury, in particular, that the government’s vision of a new welfare-to-work system could not be repeatedly salami-sliced.”

In typically dramatic fashion, last year Osborne jacked up the national minimum wage from £6.50 to £7.20 an hour, with built-in rises lifting the floor to £9 by 2020. Osborne’s vision is to move “from a low wage, high tax, high welfare economy; to a higher wage, lower tax, lower welfare country.”

Sounds good, doesn’t it? But it is wildly unrealistic to think that a higher minimum wage can be as effective as transfer payments at alleviating income poverty, not least because it is inevitably weakly targeted on the poorest. The combined effects of the higher minimum wage and changes to the UK tax and benefit system, analyzed by the Resolution Foundation, shows that for households in the bottom half of the distribution, the effects of cuts to benefits will far outweigh the uplift from higher wages and reduced tax rates: 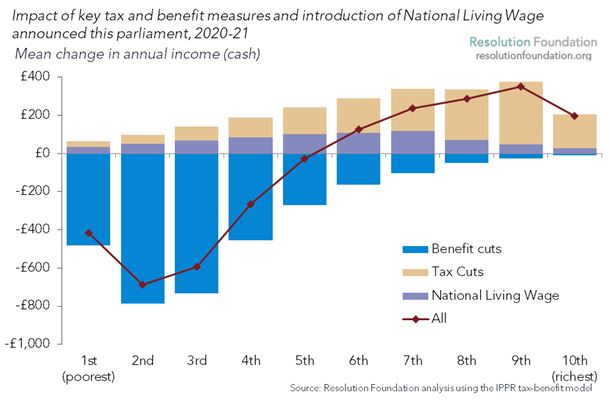 Osborne shares an instinct with Paul Ryan and many other American conservatives that government transfers alleviating poverty represent a failure of policy (with the notable exception of payments to retired people). But he realizes that low wages will not rise by themselves. Duncan Smith is a Conservative who wants to reform the safety net without drastic cuts. Osborne is a Conservative who wants to sharply reduce welfare spending, but is willing to aggressively lift the minimum wage. Right now, most American conservatives seem to be with Osborne on the cuts, but against him on the minimum wage.

Fighting poverty by cutting transfer payments to the poor will not be an effective strategy. On the other hand, there is no way we can redistribute our way out of poverty. We should expect and reward paid work. The individual has to take responsibility. But for the foreseeable future, the only way to keep families out of poverty will be through a combination of both higher wages and substantial transfers: the conservatism of Osborne plus the conservatism of Duncan Smith. The choice is not between welfare and work. We need both.

Should the US follow the UK to a Universal Credit?

Alan Berube
Sunday, May 1, 2005
Get daily updates from Brookings