It is often rather important that somebody knows what they’re doing. Few of us would board a commercial airplane, for instance, without feeling confident that the pilot was well trained and accredited. Occupational licenses are a way to set a clear competence bar in such activities.

But licensing also acts to mute competition by creating barriers to market entry. There are plenty of activities where licensing is unnecessary, or unnecessarily strict, which limits market dynamism and possibly social mobility, too.

The long boom in licensing

State governments are regulating more everyday professions through licensing, according to a recent report by the White House. In the 1950s, roughly 5 percent of jobs required a license; now that number is roughly 25 percent. Most of that rise comes from an increase in the number of professions that demand licenses, rather than from increased employment in already licensed professions. As a recent paper from the Brookings Hamilton Project shows, occupations now requiring a state license include hair-dressing, auctioneering, makeup artistry, and scrap metal recycling.

Licensing laws increase prices between 3 and 16 percent, depending on the particular profession. In many cases, there are better ways to ensure quality and professionalism, especially in the era of Yelp and TripAdvisor. In many cases, the regulations simply protect incumbent businesses, and benefit the schools that train those aspiring to become licensed. In some cases, the licensing schools have a direct hand in creating the state requirements. So there are some vested interests here.

1. Since state licensing laws vary widely, a license earned in one state may not be honored in another. In South Carolina, only 12 percent of the workforce is licensed, versus 33 percent in Iowa. In Iowa, it takes 16 months of education to become a cosmetologist, but just half that long in New York. This licensing patchwork might explain why those working in licensed professions are much less likely to move, especially across state lines: 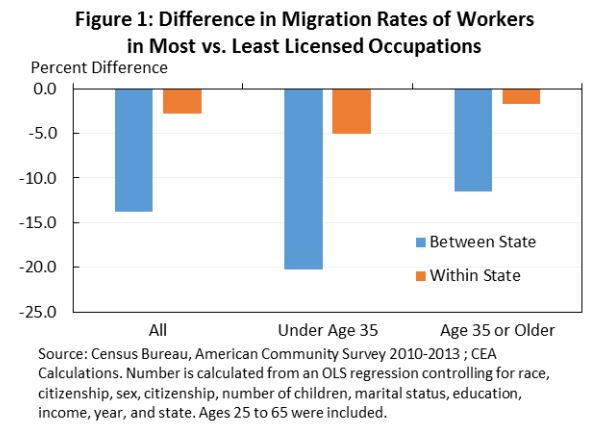 2. In many cases, people who’ve been imprisoned face a lifetime ban on obtaining an occupational license. This adds to the employment barriers faced by those leaving prison.

3. Licensing requirements impose up-front costs. The actual licensing fees are often just the tip of the iceberg; many aspiring professionals must spend time and money attending the required trade school courses. These burdens fall disproportionately on people from lower-income backgrounds.

4. Licensing can act as a form of “opportunity hoarding,” allowing those with resources and connections to benefit from the higher incomes flowing from these occupations, in part by preventing others from competing with them.  As Reihan Salam points out, questionable licensing extends well up the income distribution. Dentists in North Carolina prevent other professionals from providing teeth-whitening—even though the procedure is relatively straightforward. Insurance brokers in Utah play a similar game by attempting to make free equivalents of their service illegal. If nurses were allowed to perform more routine medical procedures, doctors would make slightly less, but nurses could earn more and overall health care costs would likely fall.

Preparing for the (non-existent?) future of work

An unequal embrace of digitalization may contribute to recession risk