Tax Day­—this Wednesday—is one of give and take. While many Americans have written out checks to the IRS, others will be looking forward to a check from the government, thanks to the Earned Income Tax Credit (EITC), which turns 40 this year. It now accounts for $66 billion in spending; 26.2 million tax filers (nearly a fifth of all individual filers) received an average of $2,359 in 2012.

The EITC is a favorite target for tax reformers. Senator Marco Rubio, for instance, proposes to replace the current lump-sum EITC payment with a set of smaller installments which would arrive through workers’ paychecks. At first glance, this seems like a logical move: EITC families often struggle to make ends meet and take on debt to pay for utilities, groceries, and unexpected problems between the annual tax refunds.

In fact, EITC recipients behave in ways that wealthier observers may find counter-intuitive, and the way they interact with the existing program casts doubt on the wisdom of Senator Rubio’s proposal.

Three reasons to proceed with caution on the Rubio plan 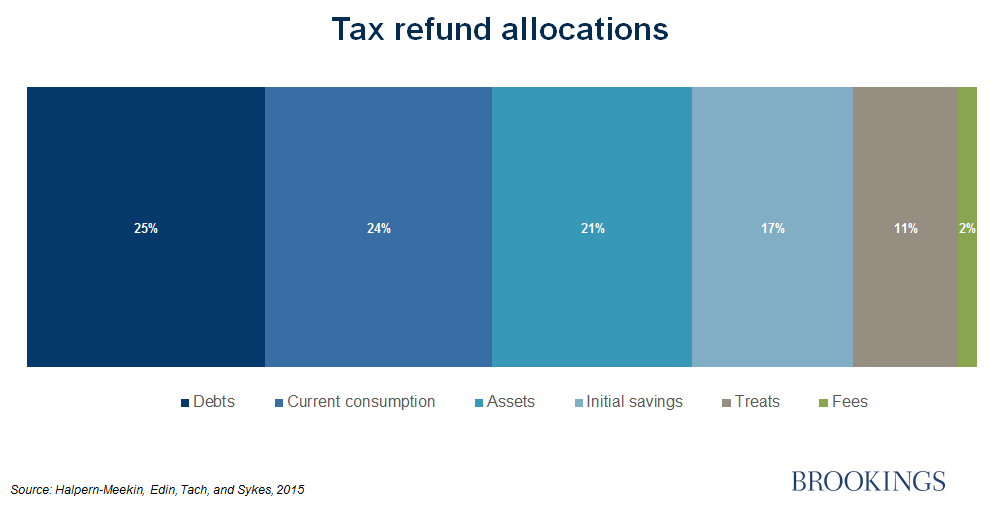 Filers used a quarter of their refund, on average, to pay down credit card debt and overdue bills; another 24 percent was used for consumption (e.g., “stocking up” on groceries, diapers, and other household necessities for lean times). Twenty-one percent went to things that could be seen as investments, such as cars to get to work or education expenses. They saved 17 percent, although only 7 percent of the total refund dollars remained in savings six months later. The remaining portions went to H&R Block and to treats, often to give the families’ children a taste of middle class life (e.g., a vacation).

Given these families’ financial constraints and the psychological stress they endure, the authors note that it’s “surprising” that more of the refund money doesn’t go to treats. Sendhil Mullainathan, whom the authors frequently cite, would say that the tax-windfall temporarily reduces the strain on mental bandwidth, allowing the families to think long-term and plan ahead.

Rather than advance the credit, as Rubio proposes, Halpern-Meekin and her co-authors suggest deferring it. In April, filers could decide to receive a portion of their credit in later installments, perhaps with a small amount of interest. This would provide the recipients with the “forced savings” mechanism and a “tax-buffer,” while also allowing them to save, plan, and smooth their consumption more easily.

Should we expand the EITC for childless workers?

Rubio and others have also proposed increasing the EITC for single childless workers and non-custodial parents. This is a good idea. But the Halpern-Meekin et al. work cautions against Rubio’s suggestion that the increase be funded by a reduction in the EITC for households with children. The average refund for these families was $4,686, equal to three months’ earnings.

We should think hard before reducing that: expenses exceed income during a typical month for families in the study and nearly 9 in 10 of the families carried some form of debt. To move into the middle class, these families need the support system provided by the current EITC to borrow less and save more. Budget neutrality is desirable, but the best way to raise money is to ask more of the affluent than of the poor.

This is the first in a series on proposed Republicans tax reforms. Later this week, Isabel Sawhill and Emily Cuddy examine the proposed Lee-Rubio tax credit and parent penalties.

Focusing on the middle class