Making friends with people from different neighborhoods or of different ethnicities protects against a cramped, narrow view of the world, but it could protect against poverty too, suggests a new report from the UK.

Using data from the UK Household Longitudinal Study, Understanding Society, a team of researchers supported by the Joseph Rowntree Foundation explored the relationship between social networks and poverty across ethnicities. Their study revealed two important findings: 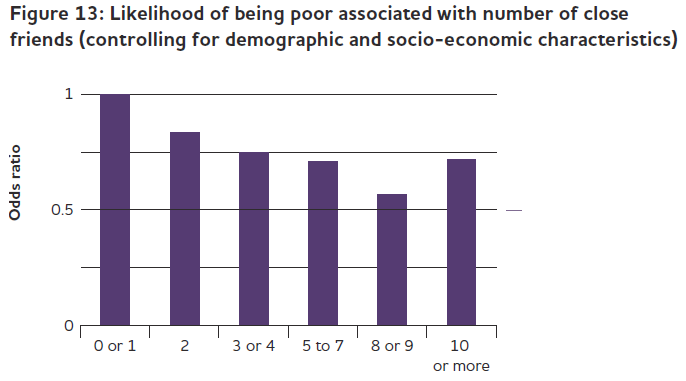 Social networks are only one mechanism for reducing poverty, and by no means the most direct. It is also inevitably difficult to tease out cause and effect. But the UK results are consistent with the culture of social isolation commonly associated with poverty and social immobility.

Robert Putnam’s new book Our Kids: The American Dream in Crisis highlights class differences in social ties as one way in which “more affluent, educate families amplify their other assets in helping to assure that their kids have richer opportunities.” Putnam finds a gap in friendship networks between people of differing levels of education. Indeed, the isolation of the most disadvantaged adolescents is a major theme of his book. A number of factors may be associated with this gap, including increased neighborhood sorting by income in the U.S. may be reducing the chances of more diverse social networks, including among children and young people. As he puts it: “Our kids are increasingly growing up with kids like them who have parents like us.” This represents, he warns, “an incipient class apartheid.”

Social networks reflect and reinforce gaps in other domains. As the UK researchers point out: “Social networks cannot be viewed in isolation; broader inequalities, including in education and employment, shape the networks that people have access to and also have a greater independent effect on levels of poverty.”

Opportunity is most threatened when inequality in one dimension strongly overlaps with inequality in others: when lack of income, poor health, low education, and family instability are tightly correlated at the individual or community level. There is another disadvantage to add to the list: isolation.

Narrowing the racial wealth gap using the EITC and CTC