In social mobility terms, having committed parents and getting a college degree is like winning the lottery twice. But the two wins are starting to come together. This bodes well for the prospects of fortunate children, less well in terms of closing the opportunity gap.

As Robert Putnam’s new book Our Kids highlights, there is a stark “parenting gap” between children raised in affluent and poor homes. Our own work suggests this gap is an important element in the intergenerational transmission of economic status. We also know that a bachelor’s degree is a massive mobility booster, especially in terms of helping poor kids escape poverty.

What about the relationships between parenting gaps and college gaps? Two papers presented at this year’s American Economic Association annual conference cast some light on this question.

In the first, Harvard’s Jane Leber Herr examines how the timing of first births impacts mothers’ subsequent labor market activity. In theory, women who become mothers later should return to work faster, because their higher levels of human capital increases the opportunity cost of staying home. But using data from the 1979 cohort of the National Longitudinal Survey of Youth (NLSY79), Leber Herr finds the expected result only for less-educated women. Older high school graduates were more likely to work in the year after a first birth than younger ones, but the same did not hold for college graduates: 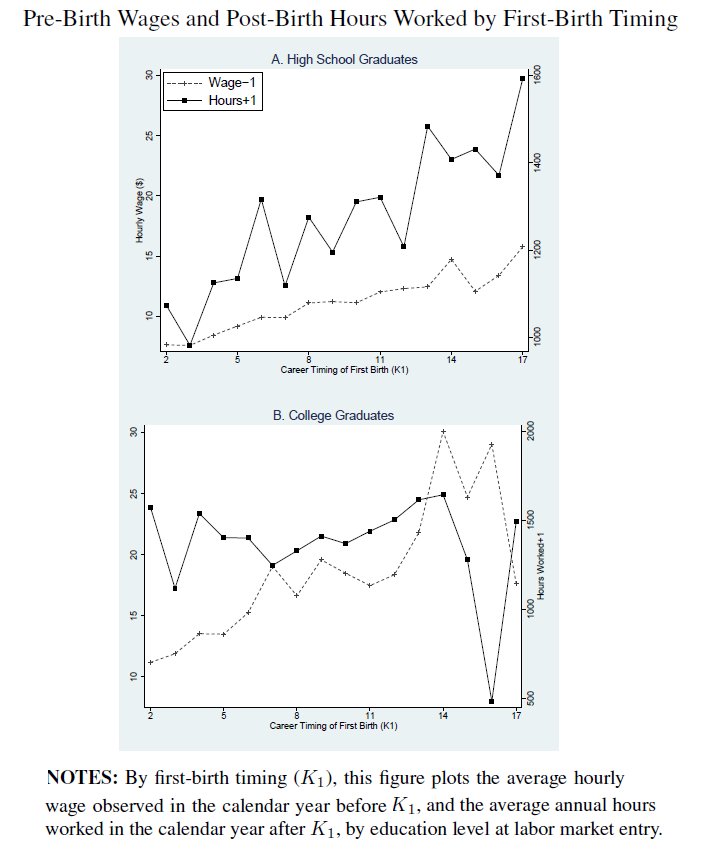 Even when controls are added for other characteristic that could explain both education and labor market behavior, her results stand. From a narrow economic perspective, this is puzzling. As Leber Herr concludes:

“The lack of this expected relationship, despite the compelling opportunity cost story, suggests that the labor supply decision of college graduate mothers is driven by factors that are more important to the household utility maximization decision than the monetary value of her time.”

Here is one factor that could explain Leber Herr’s result: a growing desire among well-educated parents to make investments in their own children. In a separate AEA paper, Cristina Borra and Almudena Sevilla find that increased competition for college places in the United Kingdom helps explain growing class gaps in parental time investments.

This finding is in line with U.S. results published by Ramey and Ramey (2010) in the Brookings Papers of Economic Activity, but is in some ways more striking. Competition for college places in the United Kingdom heated up during the 1980s and early 1990s and then eased again. Borra and Sevilla find that it was during this earlier period that income gaps in parental time investments widened, especially in terms of help with homework and other educational activities.

College is becoming a “bottleneck” in the opportunity structure. This is both a cause and an effect of the determination of affluent parents to get their own kids a bachelor’s degree. We need to widen access to college, but we also need to strengthen alternative routes to success, in order to lower the stakes at least a little.