California is often held up as a warning to those with misplaced aspirations for upward mobility. Yes, Hollywood and Silicon Valley hold out the promise of fame and wealth, but observers from Rick Perry to Woody Guthrie have denounced that story as mere myth: for the average Californian, they say, taxes are high, regulations onerous, and the workers outnumber the jobs.

But since Raj Chetty and his colleagues at Harvard and UC Berkeley revolutionized the study of social mobility—revealing significant variation within the United States, especially at the metro level—a more nuanced story has emerged. At least in terms of the administrative data mined by Chetty, Californian mobility looks pretty good.

Among large metros—commuting zones with more than two million people—children born in Californian cities into the bottom income quintile have an above-average chance of rising to the top quintile (the Golden State cities are represented by the light blue bars): 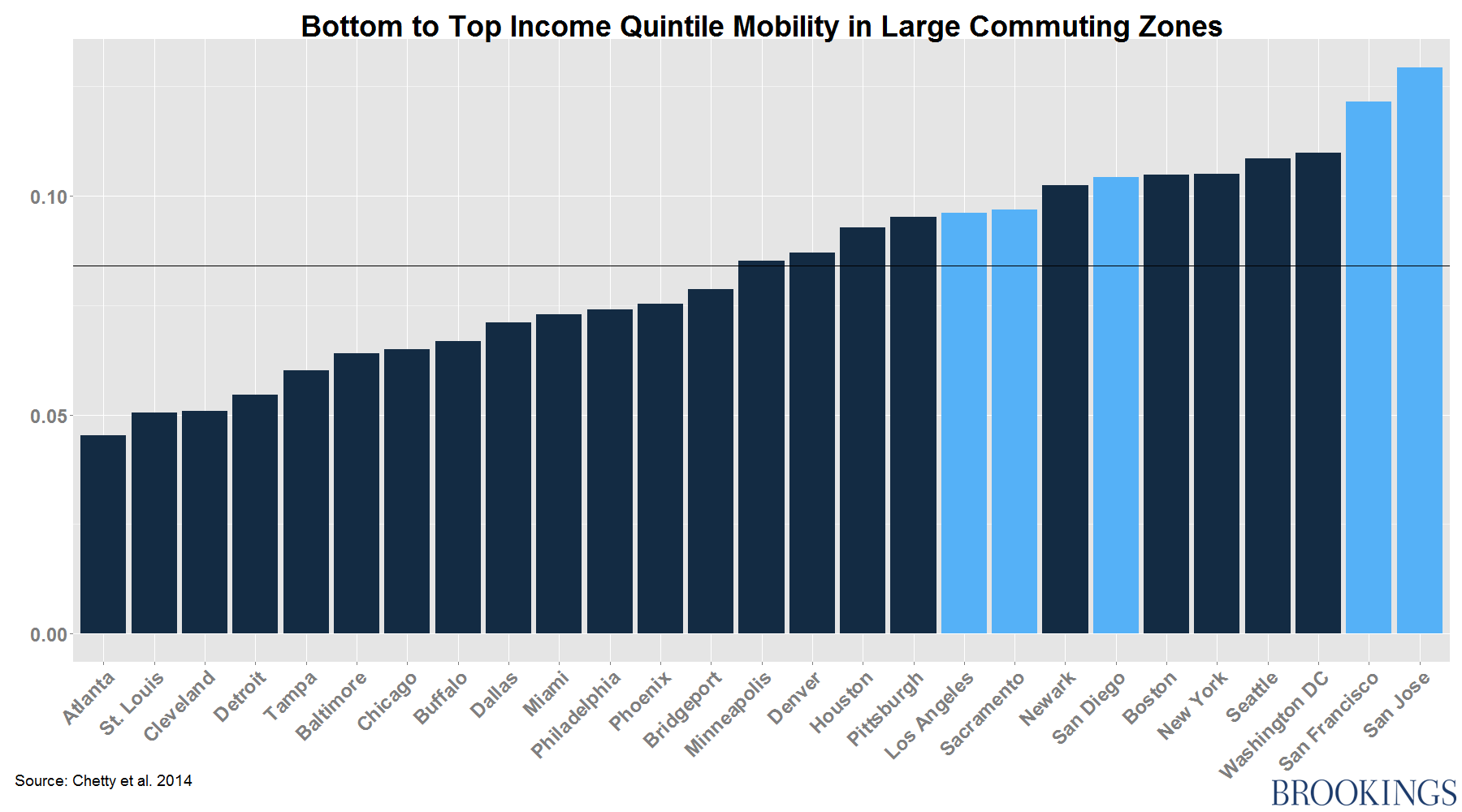 The same pattern holds for another measure of relative mobility: rank-rank correlation, or the correlation between the parent’s percentile rank within their cohort’s income distribution and the child’s percentile rank as an adult within their cohort’s income distribution. (Higher correlations indicate that the parents’ income rank more strongly predicts a child’s income rank, meaning less intergenerational income mobility). Californian metros tend to have low rank-rank correlations, which suggest more mobility: 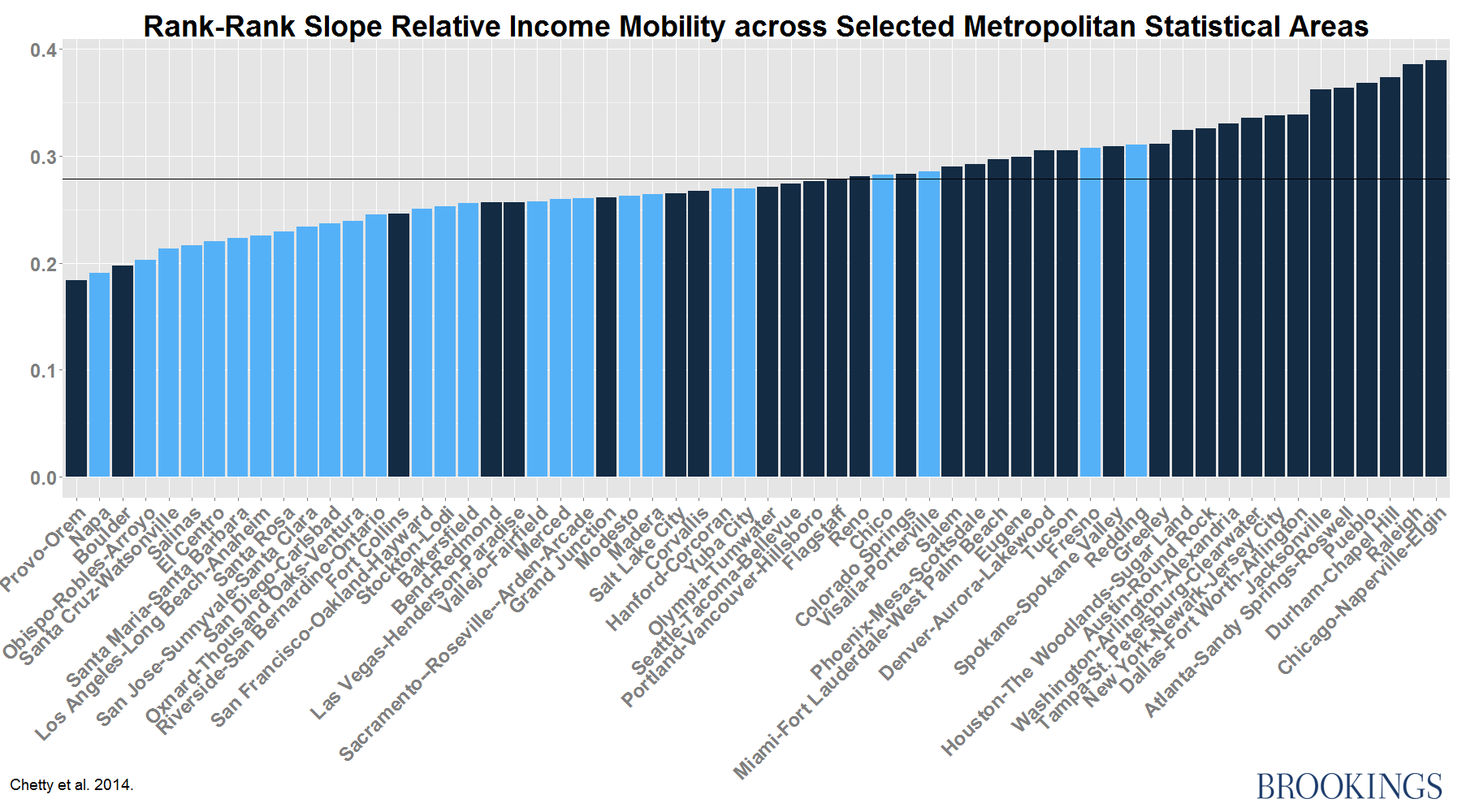 Why are Californians so mobile?

The Harvard study showed that the Gini coefficient, a measure of inequality, is correlated with income mobility, but Californian cities are middle-of-the pack for this measure: 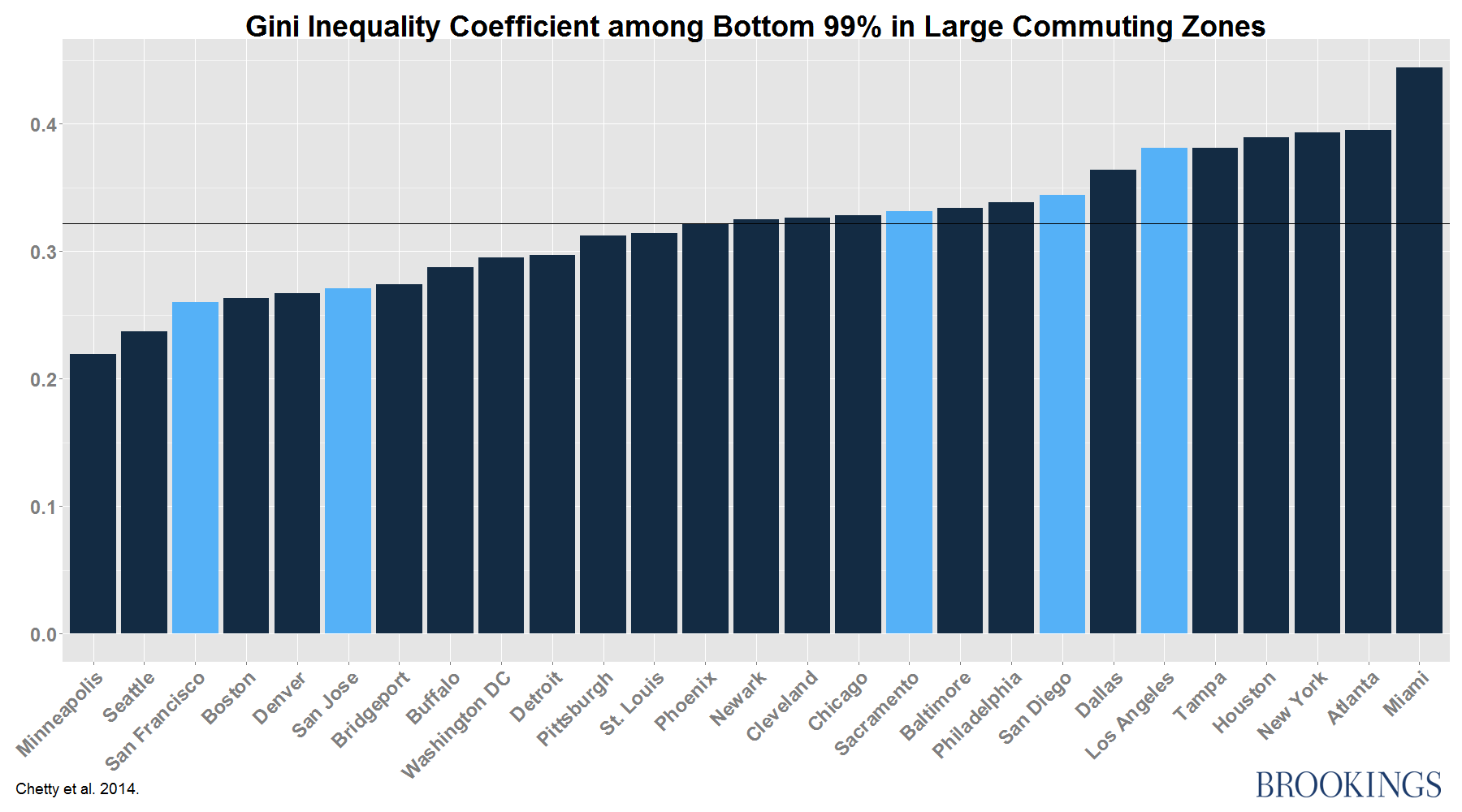 On another measure of inequality, however – the proportion of income taken by the top 1% – a couple of Californian metros, San Francisco and San Jose rival New York: 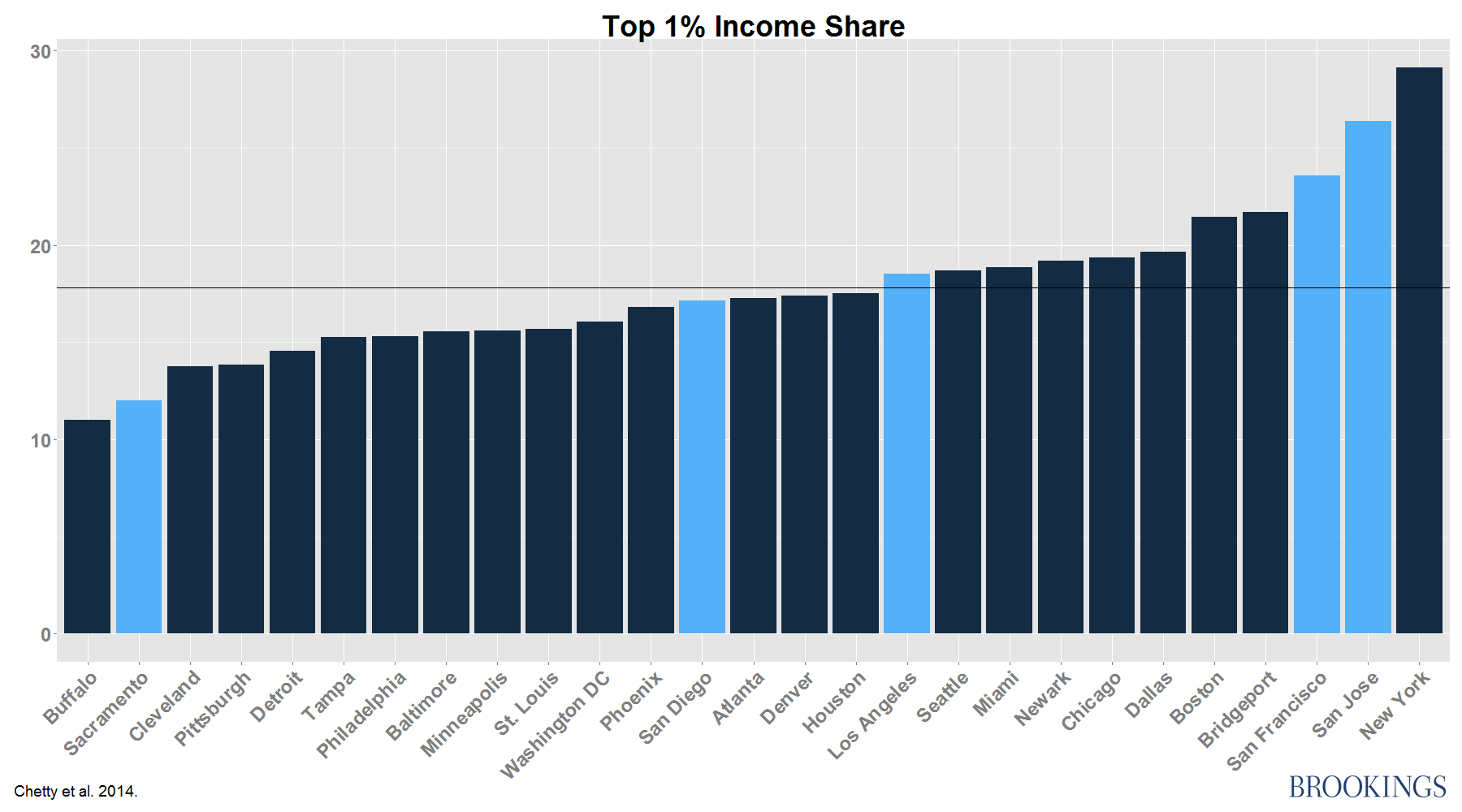 By contrast, Sacramento scores fairly low on this measure, and more importantly, Chetty’s team found no correlation between mobility and this measure in any case.

Education may offer a partial explanation. Of the 27 commuting zones with more than two million residents, California occupies the top four places in terms of rates of college attendance: 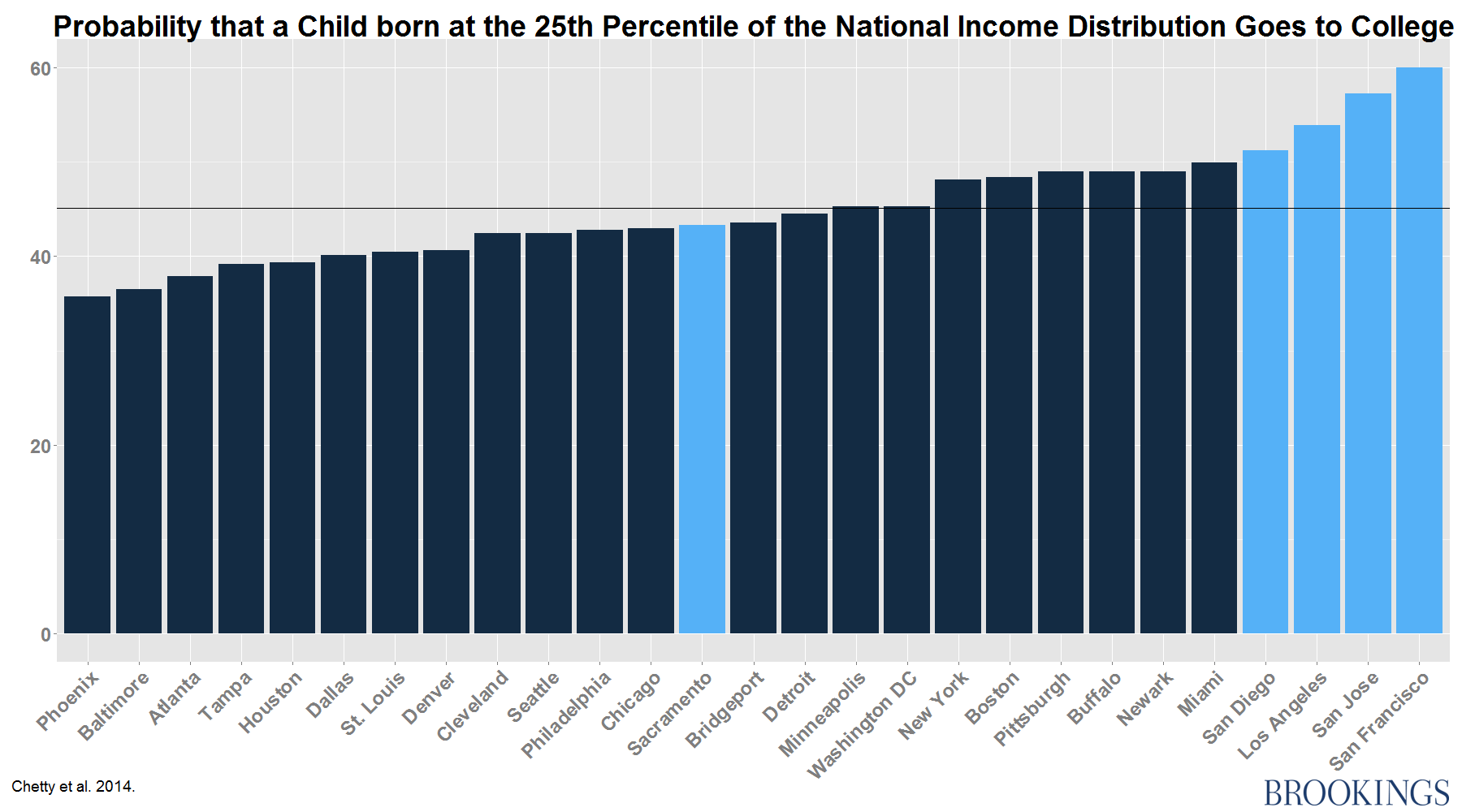 Of course, these analyses have to be taken with at least a grain of salt; for one thing, California also has above-average numbers of undocumented residents, who do not appear in these data and may pull the true averages down. But the state—at least at the metro level—is certainly not as dysfunctional as some critics claim. Moreover, there’s variation in mobility rates across California’s cities. The main message here, then, is that social mobility is best studied at the metro level.