Progress for black Americans over the last half-century has been real, but halting. The battle won against Jim Crow have meant real progress with respect to voting rights and the rights of blacks to buy housing and consumer services free from legal discrimination. Gaps between whites and blacks have narrowed on many fronts, including entry into professional careers—but they have persisted on others, notably income.

First, the good news: there has been strong convergence in employment by occupation between blacks and whites. More than any time in American history (save perhaps Reconstruction), ability, rather than racial heritage, that determines occupational status.

From 1968 to 2014, the percentage of whites working in in high-paying technical professions (in this case, engineering, science, software, and medical) doubled from 3.2 percent to 6.7 percent. But for blacks, the rate quintupled, from 1.0 percent to 4.9 percent, improving the relative position of blacks to whites. Similar rates of convergence occurred for other highly skilled professions, like management and law: 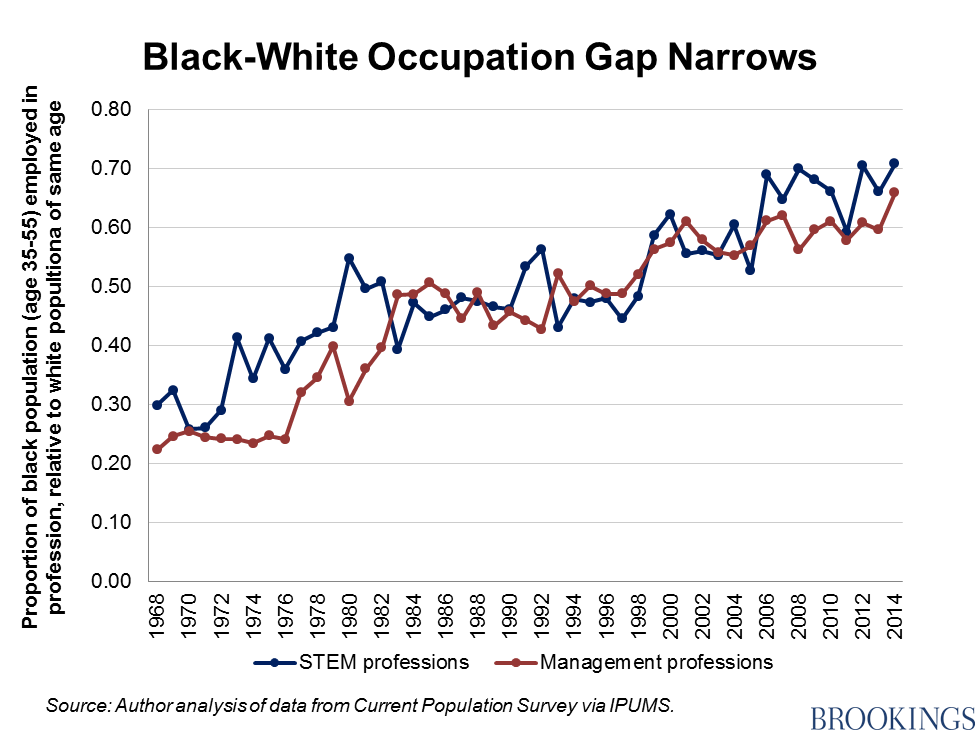 Occupational convergence is good for the economy as well as for equality. These professions contribute disproportionately to the entrepreneurship and innovation that drive growth, and cultivate in-demand skills. Occupational convergence by race and gender enhanced U.S. economic growth by 15 to 20 percent since 1960, according to estimates from economists from the University of Chicago and Stanford.

But Black-White Income Gaps Are Stuck

Between 1968 and 1991, blacks made steady progress in living standards, both in absolute terms and relative to whites, closing the income gap from 40 percent to 27 percent. But the gap has not narrowed since. If anything it has widened slightly, as incomes for both groups have increased at more modest rates. Other gaps, like relative rates of employment and homeownership have also ceased to narrow.

Why? One possibility is that blacks are often paid less—about 10 percent on average—even when working the same occupation as whites. This is probably a combination of discrimination and differences in skills.

As for discrimination, experimental evidence shows that potential employers are less likely to initiate the hiring process with blacks even when their resumes are identical. On the skills side, blacks are significantly under-represented in top colleges: only five percent of students in the top decile of four-year colleges (ranked by alumni earnings) are black. (I’ll be writing again on this divide next week.)

We are right to celebrate progress for black Americans. But especially given the slower gains of recent years, we would be wrong to think we are close to the goal of true race equality in America.