It goes without saying that parents have a profound effect on the relative economic success of their children. Parenting behaviors—reading and speaking to children, breastfeeding, offering psychological support, and building character strengths—are related to children’s performance later in life. And there are genes, obviously, but the most comprehensive study so far finds that genetic differences can explain only about one month of the gap in educational attainment across thousands of individuals. Economists have found that inherited wealth is far more important.

In a new analysis published in Economic Geography, Douglas Massey of Princeton and I find that another element of parental advantage—the neighborhood in which they raise their children—matters a great deal. The effect of neighborhood income is 50 to 66 percent of the parental income effect, so that growing up in a poor neighborhood would wipe out much of the advantage of growing up in a wealthy household. Lifetime earnings are $900,000 (or $730,000 in net present value terms) higher for those raised in top quintile neighborhoods than for individuals from bottom quintile neighborhoods. That is slightly larger than the difference between the average college and high school graduate.

How the analysis was done

To arrive at this result, we analyzed data from the Panel Study of Income Dynamics to estimate how well average parental household income during the first 16 years predicts their average earnings as adults between the ages of 30 to 44. To control for other aspects of parental influence—like parenting skills—we controlled for sibling income for those born during the same period (1965 to 1975), under the assumption that siblings raised in the same household are exposed to similar advantages or disadvantages. Then, we calculated the average household income of the census tracts that children inhabited for the first 16 years of their life and observed how well this measure predicted future adult earnings.

We added another wrinkle: cost of living. Income in a small Midwest city goes a lot further than income in New York City. Accounting for these purchasing power differences reveals an even larger importance of neighborhood income, as the chart below shows. 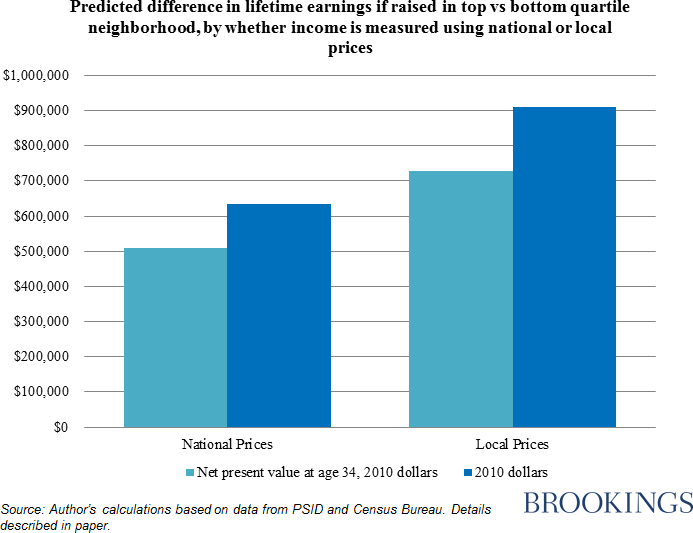 There are many theories about how neighborhoods might influence lifetime earnings. Disappointing evidence from a public housing experiment failed to show that moving to a neighborhood with lower poverty rates increased upward mobility. The problem with these findings, however, is that the intervention—a housing voucher—made almost no difference in the quality of schools attended by those who grew up in neighborhoods that were slightly and temporarily less poor, perhaps because areas near good schools lacked housing afforded by vouchers.

We know school quality is highly correlated with neighborhood income, and experimental evidence shows that poor children have higher cognitive scores and lifetime earnings when they attend good schools. Interesting quasi-experimental evidence from the random assignment of refugees shows that those who grow up in better neighborhoods do better at school. Given that inequality is partly inherited via neighborhoods, we need to make them more equitable and less determinative in accessing important public goods like quality education.