The United States imagines itself as a classless society, based on a faith in natural equality – that all are “born equal.” (I’ve written a bit on this in Saving Horatio Alger, the latest Brookings Essay.)

Even if there are wide inequalities in income, wealth or education, the nation displays what the historian James Bryce called “equality of estimation,” or esteem. As far back as 1906 Werner Sombart, the European socialist, noticed that in the United States, “the bowing and scraping before the ‘upper classes,’ which produces such an unpleasant impression in Europe, is completely unknown.”

This classless orientation has at least three consequences:

Politicians are obliged to adopt an “everyman” persona to be electorally successful. Andrew Jackson was the first American politician to turn his humble roots to political advantage, joking that he could never trust a man who only knew one way to spell a word. His 1829 inaugural celebrations, featuring cheese, beer and raucous celebrations, led to Jackson being caricatured as “jackass.” (His supporters delighted in and adopted the image, which survives as an emblem of the Democratic party to this day).

Accusations of “elitism” are especially damaging in a culture that instinctively rejects the idea that certain people are born to rule, and others to be ruled. John Kerry was vilified for windsurfing. George W. Bush felt obliged to poke fun at his own Yale education, claiming to have read one book. Even Obama, absurdly, gets labelled as part of the elite.

2. Everyone Thinks They Are Middle Class

In a self-defined classless society, people will naturally not want to separate themselves from their fellow citizens. That is why, according to Pew, almost nine in ten Americans define themselves as ‘middle-class’ – further categorized as upper, middle or lower – compared to just 1% who label themselves ‘upper class’ and 12% as lower class (a number that has doubled since the recession hit in 2008): 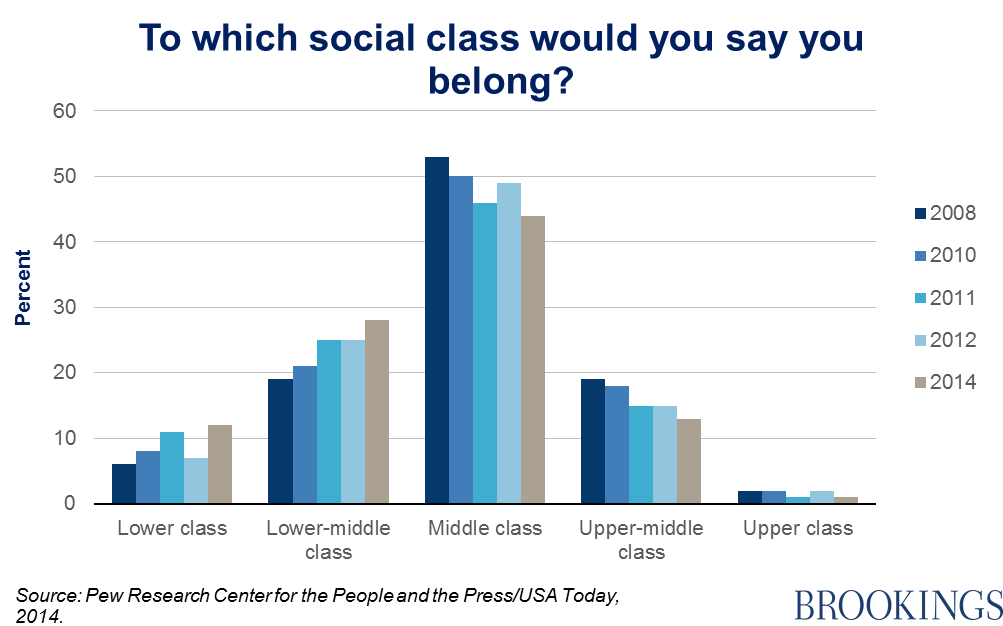 3. People Look Each Other in the Eye

At its best, America displays the culture of a true civic republic in which, according to the philosopher Philip Pettit, every individual can “speak their minds, walk tall among their fellows, and look each other squarely in the eye.” Somebody once remarked that the only thing different about rich people in America is that they have more money. They may be better off: but they are not better. This means that a certain respect is accorded to everybody, whether they are tending pumps in a gas station or moving millions on Wall Street. “Disrespecting” somebody is a social crime in a classless republic.

No doubt, American classlessness is overstated. But it remains real to some extent. Given growing inequalities in so many dimensions, the question is whether it will last.

There are some structural negative changes that make some people in particular more vulnerable. And in the end, mental health just reflects that. ... For young people who do not have good higher levels of education, what they're going to do in the future is very unknown.

How did COVID-19 affect Americans’ well-being and mental health?