Inequality during childhood appears to have harmful implications for the prospects for social mobility later in life. Economically disadvantaged children tend to have worse teachers, whether measured by inputs or outputs, and effective teachers matter a great deal. Time-use studies find that highly-educated mothers spend more time on all forms of child care than less-educated mothers and are also more likely to change the type of child care based on children’s developmental needs. Mothers with more education and higher incomes score higher on indices of effective parenting than their less advantaged peers.

No surprises so far, perhaps. But less well known is the way that these gaps have widened recently to unprecedented levels.

In a chapter of a forthcoming NBER volume, Martha Bailey, Melanie Guldi, and I document trends in marriage and childbearing in the United States over the last 150 years. One of our most striking findings is the recent and dramatic divergence in resources of children between more and less educated mothers. 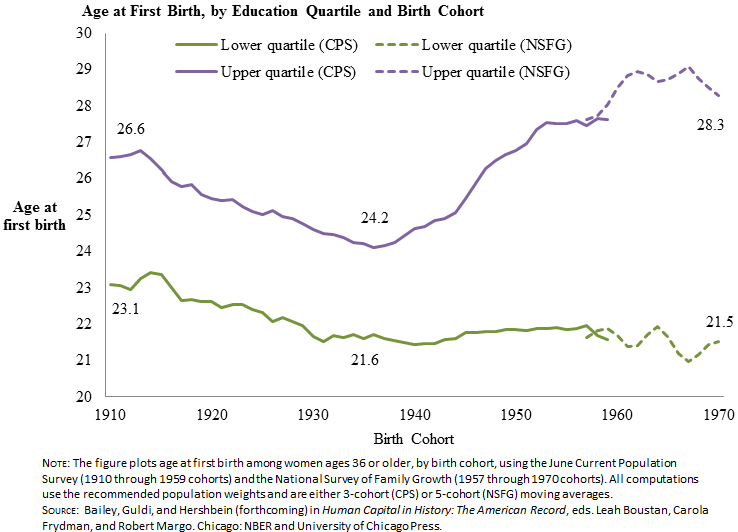 Class Gap for Age of Childbearing Has Doubled

Better-educated women have always given birth later than less-educated women, but this gap widened considerably for women born after World War II. For women born around 1970—the latest period for which women could have reasonably finished their childbearing years—the education gap in age of first birth is about seven years, more than twice what it was for the mothers of the Baby Boom. Notably, this gap has been driven entirely by the rise in age among more-educated mothers; less- educated mothers have continued to first give birth at the same age as their mothers and grandmothers.

This growing gap means that the material resources available to children with better educated mothers would be greater than they used to be even if incomes were not rising faster for the college educated (which they are). Not only do college-educated mothers increase their earnings by waiting to have kids, their premium is greater than it is for less educated mothers who delay. These trends, which show little sign of changing, are yet one more reason why social mobility may be stagnating in the U.S.