Not Ugly, In Fact


In his three-part review of my book The Son Also Rises, Reeves implies that I make a claim about racial differences in innate abilities. But I make no such claim. Indeed, in the book I point out that modern American social elites are drawn from every major racial group: Black Africans, Indian Hindus, Iranian Muslims, Egyptian Copts, Chinese, Koreans, Arab Christians. The only major ethnicity absent from modern U.S. elites are white Europeans, as this chart shows: (see chart here). 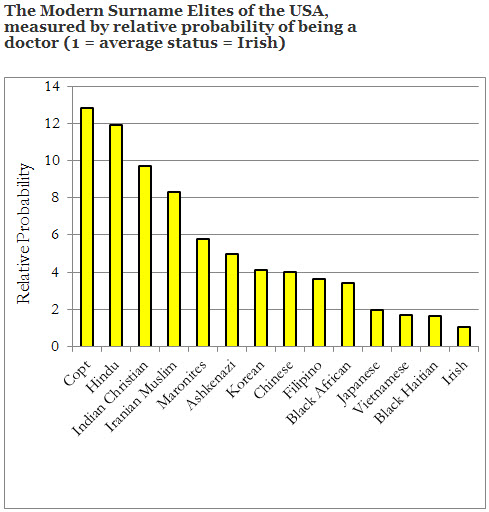 I also argue that elites and underclasses can be drawn from any population by selective migration, selective religious conversion, or selective affiliation – processes that filter people from the top or bottom of the ability distribution. It shows how such processes created group differences in social status in the case of the Jews, Egyptian Copts, and Irish Catholics and Protestants.

Studies of social status within ethnically homogenous groups show that genetics plays a substantial role in outcomes. Thus if elites and underclasses are drawn from parent populations by selective recruitment, they will differ genetically from the general population. It will take many generations for those differences to dissolve. This is not an “ugly” fact. It is not a “beautiful” fact. It is just a fact. This fact helps explain why it is so hard for societies using the levers of social policy to eliminate group disparities in outcomes. It is a fact that we should be aware of in thinking about inequalities of income and wealth.

In seeking to understand the social world it is absurd to restrict ourselves, a priori, to those explanations we find comforting: genetics must play no role, and there can be no innate group differences in abilities. Why does Reeves assume that his comfort level is a good test of social theories?

Not Bad, In Fact

Reeves dislikes the book characterizing ethnic groups in the United States as differing in average “underlying social competence.” However, his objection seems again a matter of taste, and not one grounded in facts.

The persistence of various ethnic groups at upper and lower levels of status in the United States has been taken as demonstrating the pervasive effects of racism in the United States, and the pervasive advantages of group cultures or connections. However, the book points out that we can observe exactly the same persistence among groups and families not perceived as ethnically distinct: those bearing French surnames, for example, or those with the rare surnames of the 1920s rich. Ethnic groups echo the experience of the majority population, so should we posit different processes?

The structure employed in the book explains otherwise mysterious social facts. Why, for example, do the children of Latino and Jewish families of above average income experience different amounts of downward regression in income? We would expect racial barriers to be less significant for higher income families.

Again the point of investigating the social structure of societies is not to validate comforting assumptions – from Reeves or anyone else – about the social world. It is to develop testable theories of what processes explain what is observed.

There are some structural negative changes that make some people in particular more vulnerable. And in the end, mental health just reflects that. ... For young people who do not have good higher levels of education, what they're going to do in the future is very unknown.

How did COVID-19 affect Americans’ well-being and mental health?