The marriage gap by social class is a source of anxiety, since it contributes to inequality – and to inequality of opportunity, too. Kids raised by married parents do better on all fronts. But it’s hard to tease out cause and effect. It seems unlikely that the act of getting married, or even the fact of being married, triggers big changes in parenting or employment.

Rather than focusing on where marriage is dying, it makes more sense to look at where it is surviving. As I argue in a piece for The Atlantic (“How To Save Marriage in America”), the marriages of the elite are not like the marriages of their parents, or the ones their parents rejected. In these new marriages, husband and wife are both earners, and both parents – and expect to be.

Marriage: For The Children

These marriages are not based on sex, or money. They are based on parenting; and not just feed-the-kids parenting, but parenting in the form huge commitments of time, energy, money and attention to the educational, social and personal development of their offspring. These are High Investment Parenting (HIP) marriages.

Although HIP marriages are being pioneered at the top, they are needed across society. Bringing back “marriageable” men – ie. taciturn, semi-engaged breadwinners – is not the solution for poorer Americans.

The way forward is to break down gender roles, not reinforce them. In many low-incomes communities, labor market prospects for Mom are better than for Dad. That’s OK. Dad can be, well, Dad. Unfortunately, the traditional idea of marriage is proving most resilient among the groups where it is least realistic: 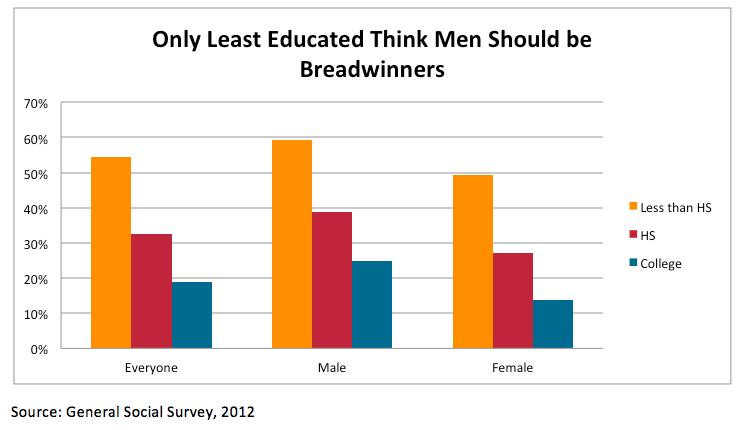 Well-educated Americans are offering a new model of marriage, free of some of the constraints of the traditional model, but based on a deep commitment to parenting. This commitment, in effect a form of “co-parenting contract” according to Lundberg and Pollak – is what matters most in terms of promoting upward mobility and life chances for children, rather than the marital institution itself.

A Campaign for Parenting

Of course, we need to improve labor market prospects for men, especially those with fewer skills – but no more so than for women. But there a deeper cultural shift needed too. Not ‘back’ to traditional marriage but forward to a child-focused, egalitarian model.

What seems to be happening in the contemporary United States is that adults committed to parenting, are also committing to marriage. So from a social mobility point of view, what’s needed is not a Campaign for Marriage but a Campaign for Parenting.