Unemployment is bad news all round—and it may damage social mobility through its effects on parenting, and the drive and ambition of the next generation. That’s the warning given by Larry Summers—recently passed over as Fed Chair—in a thought-provoking interview with the Wall Street Journal.

While economists and policy makers rightly worry about today’s jobless, there are potentially some long-term costs, too, not just for the individual out of work—but for their children. And not just in terms of economic and educational opportunities, but in terms of the picture of adult life provided to impressionable children. As Summers says:

“We may be losing yet another generation of kids who don’t have the kind of role models in their parents that they should because of the difficulties their parents are having economically. There’s now been clear studies that show that when dad and mom have jobs that they’re proud of and they’re doing those jobs, junior works harder in school, does better in school, and is more likely to succeed.”

In other words, jobless parents raise less ambitious kids. If that’s right, inequality across generations gets entrenched even more deeply.

More Children With Mom or Dad Out of Work

More children are being brought up with the experience of seeing a parent out of work, as a recent report from the Census Bureau shows: 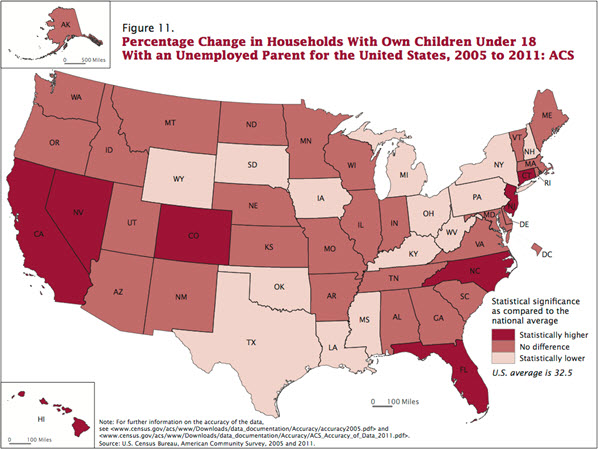 Learning (or not learning) the Work Ethic

Possessing “drive” or the intrinsic motivation to succeed can make a big difference in whether a child moves up the income ladder as an adult, as our work at Brookings has shown. If children witnessing their parents’ joblessness lower their own horizons as result, the damage of today’s unemployment could last well into the next generation.