Have women won the gender war? Looking at the debate following last week’s release of data on women’s earnings in 2012 from the Bureau of Labor Statistics, you might think so. Commentators have rushed to point out that women now out-earn men in part-time jobs. Some suggest that the “77 cent to the dollar” factoid ignores important factors such as career choice or the tendency for women to work fewer hours. These arguments echo books such as Hanna Rosin’s The End of Men and Liza Mundy’s The Richer Sex, which argue that women are pulling ahead of men. But are they really? And critically, are wage gains for women translating to more social mobility? 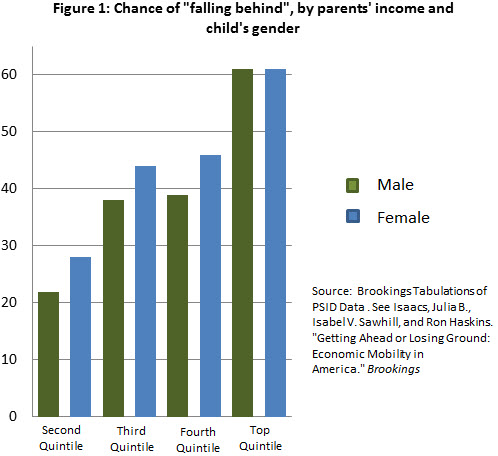 In most quintiles, women have a higher risk of being downwardly mobile than men. Most striking of all, women find it much harder to escape from the bottom income quintile than men. Almost half (47 percent) of women born to parents in the bottom quintile remain there as adults, compared to 35 percent of men. 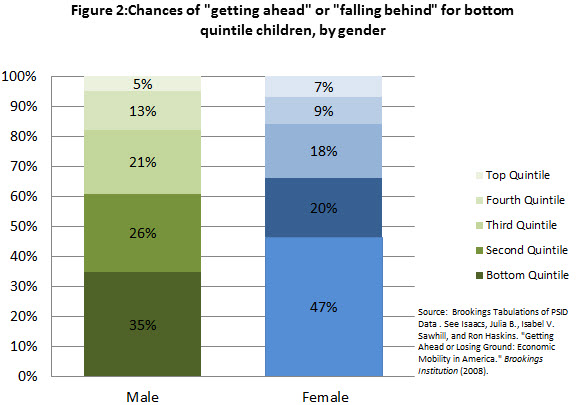 Women born poor are more likely to remain poor than men. There are a number of possible reasons for the ‘stuckness’ of women at the bottom of the income scale, including that women are much more likely to be single parents than men are.

Women have made up a lot of ground on men in recent decades. But looking at mobility patterns by gender shows that there is clearly a long way to go before we approach equality. Additionally, looking at gender gives a different slant to debates about mobility. Policies that improve relative mobility for men may not be as beneficial to women (or vice versa). The higher levels of men out-earning their parents, the greater downward mobility of women and the higher number of low income women unable to move out of the bottom quintile all speak to a worrying pattern in which men do better at holding on to the privileges accrued to them, while women still have more trouble gaining ground and once gained, lose it more easily.