By the age of two, a child raised in a poor household is already six months behind another from a wealthy home in terms of language development, according to new research from Stanford. Psychologists there used video recordings to measure how long it took toddlers to identify images of a dog and a ball; children in well-to-do households were about 20 percent faster. Additionally, children in wealthier homes learned 30 percent more words between 18 and 24 months of age. This age is crucial for development, as demonstrated dramatically by the MIT Media Lab’s Deb Roy, who recorded all of his child’s utterances during infancy, and dramatized how language emerges in this viral 2011 TED talk.

Many theories try to explain such disparities: poor nutrition, lead poisoning, stress hormones, and so on. But a simpler theory is increasingly prominent: poor children simply don’t hear as many words during these critical early years. Children in welfare families hear, on average, only 600 words per hour; those from highly educated families hear over 2,000 words per hour. By the age of 4, the total gap is estimated to be 30 million words. 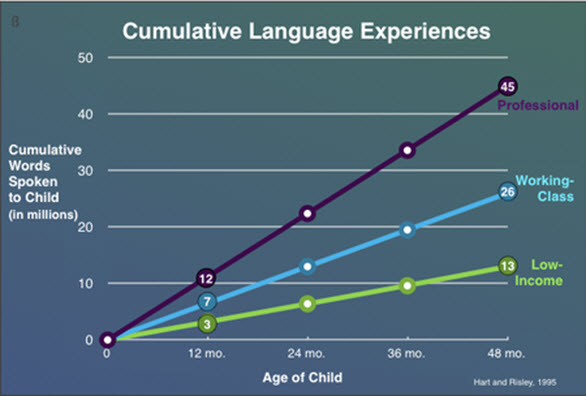 Credit: Graph of Hart & Risley’s work on the language gap, from

Some studies suggest, in fact, that differences in amounts of talking at home account for all of the variance in later IQ scores, and entirely negate any contribution from income. (Of note: hearing words on television doesn’t help.) In other words, talking more to children might strongly mitigate the effects of poverty on development.

The 30 Million Words Project teaches at-risk families about the importance of talking at home. By distributing an innovative “word pedometer,” which tracks language in the home, as well as video- and live-coaching for families, the project led to a 32 percent increase in levels of talking in at-risk homes. Run by a cochlear implant surgeon at the University of Chicago, Dana Suskind, the program recently floated the idea a “Let’s Talk” campaign, modeled on Michelle Obama’s Let’s Move.

Saying more words is just a start. As sociologist Annette Lareau found decades ago, wealthier families parent using “concerted cultivation,” in which even young children are encouraged to make choices, engage adults in productive dialogue, and assume an active role in their surrounding world. As I previously wrote in Slate, such parenting styles also largely account for the precipitous decline in corporal punishment in wealthier households. Talking to and engaging with children prepares them for learning, earning, and flourishing in their own lives. Sometimes, encouraging social mobility really is all talk.