When I received the invitation some months ago to present a paper at an academic conference in Thessaloniki, I had no idea that the Syrian refugee crisis would be headline news in Greece. Thessaloniki is on the other side of the country from where the Syrians are washing up in their inflatable dinghies, but still the refugee crisis is ever-present in even casual conversations with professors and taxi drivers. Over 300,000 refugees have entered Greece since January. By comparison, 60,000 Central Americans crossed the border into the United States last year—a veritable crisis. The United States has around 360 million people. Greece has a population of 12 million. 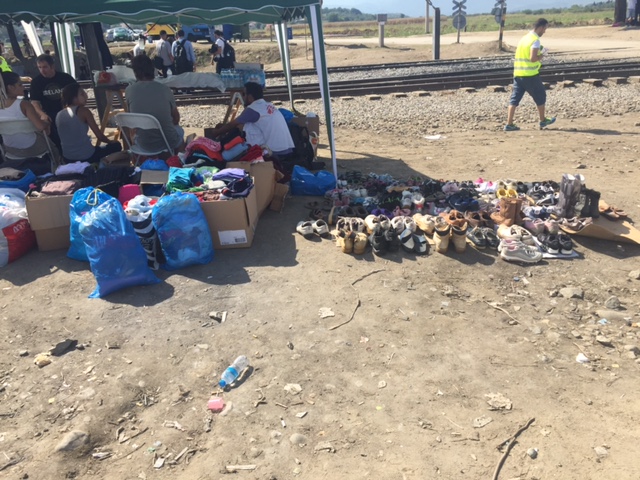 A tent set up by a Greek NGO provides shoes and other supplies for refugees. Photo credit: Beth Ferris.

The Macedonian border is only 40 miles away from Thessaloniki, and this afternoon after the conference, I took a taxi with a British colleague to the border with Macedonia (or FYROM as it’s called here). There is no “camp” and the only tents are those of nongovernmental organizations (NGOs), the United Nations High Commissioner for Refugees (UNHCR), and volunteers. Rather, there is an empty field stretching 50 feet or so to the border, dozens of police, and, incongruously, an ice cream truck. The border is quiet today—no refugees are in sight, but we are told that they come by the hundreds, sometimes thousands, at night or in the early morning on their way to Macedonia. From there, the head on towards the promised land of Germany or Sweden.

We don’t see it, but the process seems surprisingly orderly. When the refugees reach the Greek islands, they are transported to the port near Athens and are then put on buses heading toward the Macedonian border. They get off the buses in the field where we stood, walk across the border, and then board trains headed for Serbia. “They don’t want to stop, they are determined to keep walking,” one NGO staff member tells us. “We try to identify vulnerable cases and to provide medical treatment when necessary, but they don’t want to stop—they want to keep walking.”

I’m impressed with the piles of clothing, medicines, and shoes that have been contributed for the refugees. We don’t hear much in the political analyses of the European migration crisis about the heartfelt spontaneous outpouring of hospitality exhibited by ordinary Europeans, but it is alive and well on the Greek-Macedonian border. There are Greek NGOs, of course, but also contributions by individuals—high school students and businesspeople who simply drop off food and diapers and bottles of water. I talked with a Swedish doctor who, together with friends and colleagues, organized a collection of supplies and medicines and simply showed up at the border here. “We had to do something,” he said, “we had to do something.”

It seemed strangely barren and calm in that field near the Macedonian border, but it hasn’t always been this way. “It was awful in May,” one NGO staff member recalled. “The border was closed temporarily—there were just too many people coming for the authorities to handle and there weren’t enough trains. Frustration and anger grew—it was pouring down rain and there was no shelter. People sat in the rain and the mud with their crying children, waiting for the border to open, and the tension built up. Now things are moving.”

“Why do people have to walk 3,000 kilometers?” a Greek professor asks our group. “Only the fittest and the strongest will make it. Is this the Europe we aspire to?”

“Only the fittest and the strongest will make it. Is this the Europe we aspire to?”

Over half of the 300,000 refugees who have entered and crossed through Greece in the past six months, are Syrians, but there are also Iraqis, Afghans, Eritreans, and Somalis. They’re not staying in Greece—given the economic situation here, there isn’t much for them here. The double whammy of the austerity crisis and the refugee influx makes for a deadly burden. We talk with a government official who tells us about the burden on the sparsely-populated islands. “One island with only 50 Greek residents,” he said, “received 850 refugees in one day.” A military officer tells me that the island of Lesvos has 20,000 residents—and 35,000 refugees. How do people, even hospitable, welcoming people, cope with such numbers?

How do people, even hospitable, welcoming people, cope with such numbers?

For Greece, it seems imperative to keep them moving—moving through Greece to Macedonia and then to Serbia and beyond. “Sometimes they don’t even know where they are when they get off the bus,” an NGO staff member notes. “We try to explain where they are and what they face. But they are so strong and so determined. They just keep on walking.”

NATO in a competitive world: A conversation with Secretary General Jens Stoltenberg

Turkey, Europe, and the Eastern Mediterranean: Charting a way out of the current deadlock

Is there a new window of opportunity in the Eastern Mediterranean crisis?