About 12,000 troops will parade through Tiananmen Square in Beijing tomorrow to celebrate the 70th anniversary of Japan’s surrender to the allies in World War II. China’s leadership is ostensibly using the anniversary as an opportunity, to use the Chinese phrasing, to celebrate “victory in the World Anti-fascist War and the Chinese people’s War of Resistance against Japanese Aggression.”

But really, the purpose is to display its modernized weaponry ahead of several key international visits by President Xi Jinping. For Western leaders, the parade has proven a diplomatic nightmare: The Chinese have pressured them to attend, but they realize that the event is aimed at celebrating the country’s new international assertiveness (and perhaps to sideline a rather bloody summer on the Chinese stock markets). 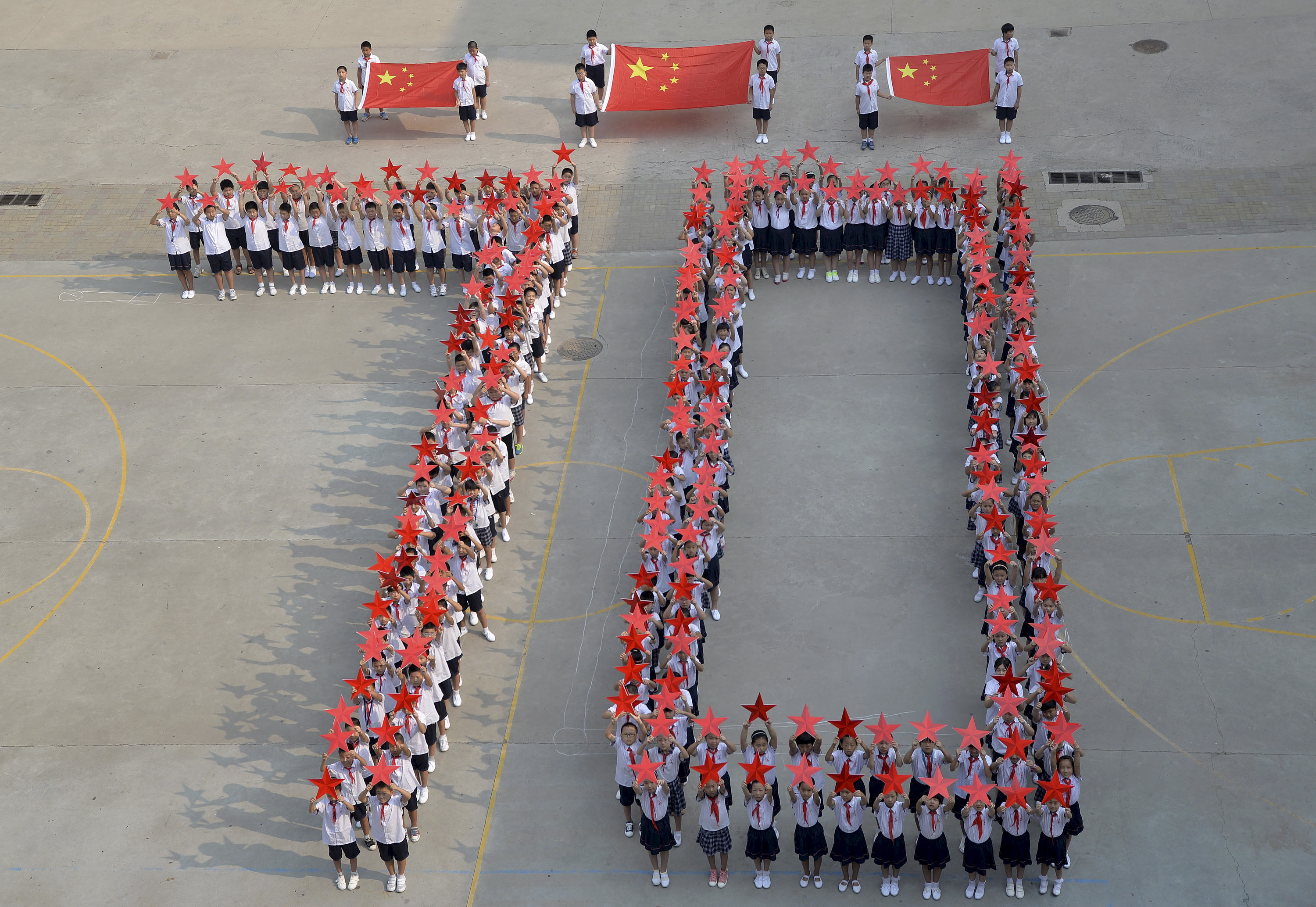 Students pose with Chinese national flags and red stars in preparation for the parade on August 31, 2015. Photo credit: Reuters/China Daily.

Sixty-six years after the end of the war, the world has been learning how to deal with a new China—now a powerful country with a strong economy and an increasingly well-equipped military. China’s defense budget has seen a double-digit increase for the past 25 years, and the country now has J-15 fighter jets, Z-19 attack helicopters, and a truck-mounted version of the DF-41 intercontinental missile. There is little doubt the parade will be impressive both in precision and display.

In spite of how the Chinese leadership spins it, the parade is not just about history—it’s also about the present and the future. China is using it as a moment to show off its strengths and assert a stronger role in the Asia-Pacific region (as tensions in the South China Sea remain high), if not the world.

One interesting sight will be the VIP box: Which heads of state will actually attend? Confirmed leaders include Russian President Vladimir Putin (who himself hosted Xi Jinping last May for a huge victory parade in Moscow); South African President Jacob Zuma; Venezuelan President Nicolas Maduro; Sudanese President Omar Hassan al-Bashir (who has an international arrest warrant against him); and—somewhat unexpectedly considering World War II sensitivities in the region—South Korean President Park Geun-hye. Park will attend ceremonies, but not the parade. North Korean leader Kim Jong Un will not be present, nor will Japanese Prime Minister Shinzo Abe.

Fellow leading industrial nations countries don’t want to put Japan in a bind, but no one is willing to offend China. Hence, state leaders have responded to the standing Chinese invitation with an array of contortions. In the end, no Western leader will attend: President Barack Obama—who will be hosting Xi Jinping in the United States in a few weeks—will be represented by U.S. Ambassador to China Max Baucus. Unlike for the launch of the Asian Infrastructure Investment Bank (AIIB) earlier this year, Washington didn’t pressure other Western leaders to avoid Beijing. This wasn’t necessary, as those governments all had their own reasons for staying away. Even the German president—a largely ceremonial figure—has declined. So has his French counterpart François Hollande, who will travel to China in October to discuss climate issues; French Foreign Minister Laurent Fabius will attend instead. Italy will also be represented by its foreign minister. As for the United Kingdom, Prime Minister David Cameron chose to wait for the Chinese state visit to London in October to meet Xi in person. Britain is represented by a former Conservative cabinet minister, Kenneth Clarke. Even more surprising is the list of retired statesmen: former German Chancellor Gerhard Schroeder, who is known to have engaged with Russia’s Putin after leaving office in 2005, will be in there, like his friend and former U.K. counterpart Tony Blair. 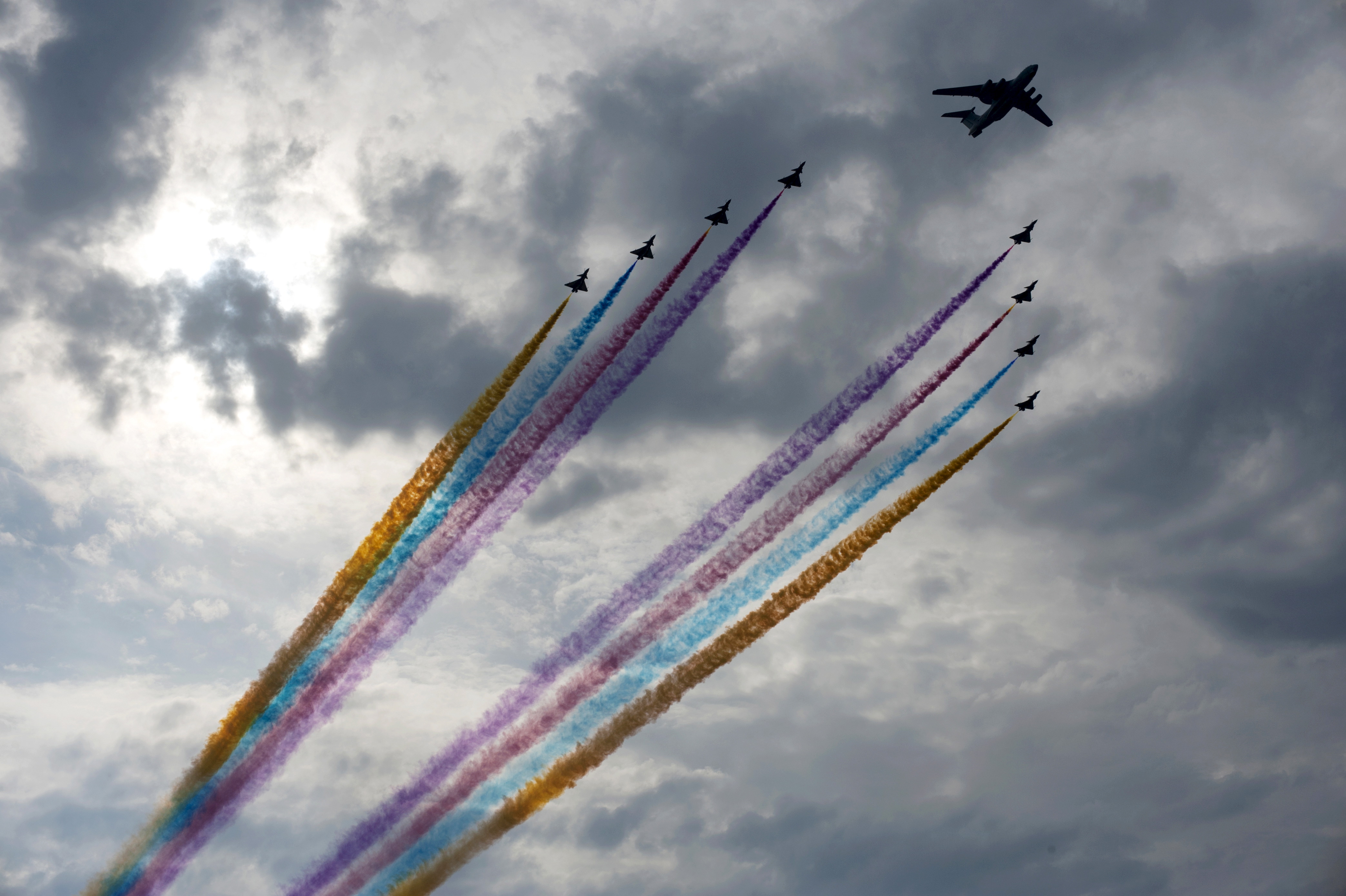 Aircraft perform during a rehearsal on August 23, 2015 for the September 3 military parade in Beijing. Photo credit: Reuters.

The U.S.-China relationship is already complicated enough and needs no further upsets. While China flexes its muscles with a parade, America is in the middle of a presidential campaign during which candidates—such as Republican Wisconsin Governor Scott Walker, who recently called on President Obama to cancel Xi’s visit—are openly criticizing China. For his part, Donald Trump claimed that “China would be in trouble” should he become president, adding: “The poor Chinese.” Although these kinds of comments cannot be taken too seriously, they will require even more diplomatic skills on the part of the current administration, and its successor, to fully restore fully the U.S.-China dialogue.

In these circumstances, it is no surprise that Washington has shown little interest in attending the Beijing events. Nor does the Obama administration want to be part of a demonstration of assertiveness weeks before a state visit to Washington by President Xi. History tells us that U.S.-China relations are going to get even more interesting than a parade.