While the Minsk II ceasefire has not yet taken full hold, observance has improved since the first week after the ceasefire began, when separatist and Russian forces occupied Debaltseve in Eastern Ukraine. The question now: will the ceasefire be fully implemented? It appears fragile at best. What happens at Mariupol has become a bellwether.

Following the February 11-12 meeting of Chancellor Merkel and Presidents Poroshenko, Putin and Hollande, the Contact Group representatives signed the Minsk II agreement. It provided for a ceasefire to begin at midnight on February 14.

The separatists and the Russian forces supporting them did not observe the ceasefire, at least not around Debaltseve. They instead pressed an offensive that they had launched even as negotiations proceeded in Minsk. Separatist leaders claimed that Debaltseve was not covered by the ceasefire, though nothing in the Minsk II agreement suggested that. In any case, Ukrainian forces withdrew under fire, and the city fell to separatist and Russian forces on February 18.

Debaltseve was a Ukrainian-held salient jutting into the separatist-occupied part of the Donbas. It is a major railway hub linking the cities of Donetsk and Luhansk, and linking Donetsk to Russia. Was the effort to take Debaltseve merely an attempt to “rationalize” the line of contact? Or does it presage further offensive operations by the separatists and Russians?

Attention has shifted to Mariupol and the town to its east, Shyrokyne. While the ceasefire seems to be doing better along much of the line of contact, reports continue of shelling, gunfire and a possible troop build-up in the Shyrokyne area. 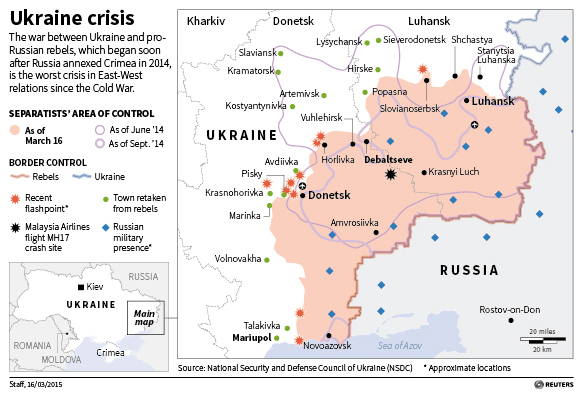 If the fighting east of Mariupol dies down, that could suggest that the separatists and Russians are content with the territory that they hold—at least for now.

But Mariupol must be a tempting target for the leaderships of the so-called Donetsk and Luhansk ‘people’s republics’. If they do not intend to implement Minsk II, seizing Mariupol would be an important step to make a frozen separatist-occupied Donbas economically viable. Mariupol is the port through which much of the steel and other industrial products of the Donbas are exported.

Mariupol is also key if the Russians desire a land bridge to Crimea. While taking the land bridge would be doable for the Russian army, holding it would prove costly. It would mean occupying a strip of territory 300 kilometers long, territory that has not shown great sympathy for the separatists or the idea of ‘Novorossiya.’ The Russian army would have to garrison the territory to fend off almost certain partisan attacks.

So a lot of eyes are now focused on Mariupol. Hopefully, the separatists and Russians will not assault the city. Street-by-street fighting would be horrific.

Moreover, an attack on the city would have broader consequences. It would call into question Moscow’s good faith (what little is left). Most analysts saw the Minsk II agreement as disadvantageous to Kyiv. Yet, if Minsk II is not enough, how much does the Kremlin want?

One almost certain result of an assault on Mariupol would be a push in Washington, Warsaw, London, Stockholm, Berlin and other European Union capitals for new sanctions on Russia. Western exasperation and anger would be high, likely so high that those EU members who question new sanctions would be rolled over. Russia would face new economic difficulties.

A second result would be reinvigorated debate in Washington—and perhaps in some European capitals—about providing defensive arms to Ukraine. President Obama held off on a decision in February given Chancellor Merkel’s effort to broker a settlement. The president does not want to undermine Minsk II.

A separatist/Russian attack on Mariupol would remove that concern. Mr. Obama would face intense political pressure to provide weapons. In this case, Ms. Merkel probably would not try to dissuade him.

Mariupol has assumed importance as a key indicator of how far the Russians want to go in Ukraine. If they make the wrong choice, the conflict will rage again, the West will react with new sanctions and greater support for Kyiv, and West-Russia relations will plunge to an even lower point.

Editor’s Note: This piece was originally published in
Ukraine Today
.

One. More. Time. It’s not about NATO